I have been on a BBC kick lately thanks to my Orphan Black addiction. Orphan Black just finished airing its second season on BBC America and has been paired with two separate shows that couldn’t be more different from one another: “In The Flesh” and “Almost Royal”. 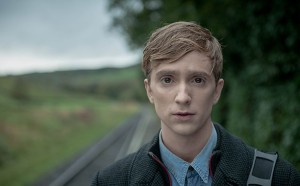 “In The Flesh” is a fresh take on what is becoming a tired genre: the post-apocalyptic zombie world. In this universe, the zombie apocalypse has come and gone and scientists have discovered a cure for the disease that turns people into zombies. People that have become zombies can’t become human again, but thanks to a drug, it keeps their cannibalistic tendencies at bay and allows the former zombie (called a Partially Deceased Syndrome Sufferer, or PDSS) to re-enter normal life. The zombie still looks like a zombie (pale skin, zombie eyeballs) but with the use of contact lenses and makeup, zombies can once again appear human.

This show centers around Kieren Walker, a boy who had committed suicide but then reanimated during the zombie rising. He is rehabilitated and is allowed to rejoin his family. His parents are happy to have him back, although his reappearance has opened old wounds due to his suicide. His sister has very mixed feelings however, as she belongs to a local anti-zombie militia called the HVF (Human Volunteer Force). She cares for her brother but has to come to terms with her dislike of zombies. Kieren’s family lives in the small town of Roarton, which hosts a local chapter of the extremist HVF group.

I have only watched the first episode of this series but I plan on catching up on it in the near future (it just finished airing its second season, for a total of nine one-hour episodes). I would definitely recommend this show to anyone who likes zombie fiction mixed with a dash of social commentary. The zombies in this show could be metaphors for immigrants, as there is a lot of zombie xenophobia in this universe. There are also parallels to people coming back from war with post-traumatic stress disorder. This show is a drama with bits of dark comedy sprinkled in. One episode in and it appears to be far better than “The Walking Dead” though with far less gratuitous violence. 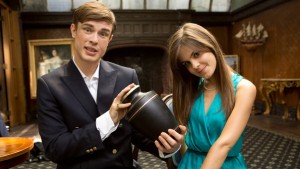 Once “In The Flesh” completed, it was replaced with the new show “Almost Royal”. “Almost Royal” is a mockumentary show in the vein of “Ali G”. The premise of the show follows Georgie and Poppy Carlton, two British royals who are far down the line for the British crown, as they embark on a tour of America per their dead father’s wishes. They stop in various cities and partake in different American events, pretending to be ignorant to the local customs. This leads to plenty of excellent “fish-out-of-water” scenarios and underestimations of their intelligence due to the characters they play; Georgie is a soft aristocrat who seems inexperienced at the most basic of tasks such as driving, whereas Poppy portrays herself as a rich airhead who only seeks employment at what she considers to be an easy job, like acting.

If you like “Ali G” I think you would enjoy “Almost Royal”. It is not nearly as offensive, but also not nearly as interesting/provocative, as “Ali G” shined a light on some pretty awful human behaviors, whereas “Almost Royal” feels like a network prank show but with some PG-13 humor sprinkled in.