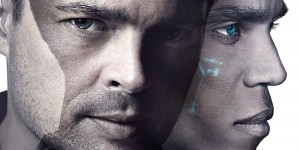 “Almost Human” is FOX’s new sci-fi cop drama and it starts off with a bang.

The scene is set.  2048.  There is a lot of crime and the only way to fight it is with robot cops helping human cops (in this universe, all human cops are given an android partner for protection).  You’d think the bad guys would have robots on their side, and maybe they do, but that has yet to be established.  Anyways, the episode begins with Detective John Kennex (Karl Urban, a sizable star to be leading a network vehicle) leading a squad into a firefight but little does he know that it’s an ambush.  He tries to help an injured cop but is abandoned by his android partner and ends up getting hit by a grenade.  The camera pans down to reveal that he has lost a leg.  Suddenly another grenade falls nearby, cut to white flash.  Next thing you know, Kennex wakes up from a 17 month coma and is in a black market lab, having his memories scanned to figure out if he has any useful memories of the incident.

As he heals, Kennex is brought back onto the force and is given a new android partner as his last one was destroyed in the firefight.  Kennex has developed an intense dislike of androids after his last one abandoned him and he ends up tossing his partner out the door of his car while driving down the freeway.  But since all cops in this world must have an android partner, Kennex is sent to Rudy (Mackenzie Crook) to get a new android.  Rudy gives him Dorian (Michael Ealy), an older prototype android that was pulled off the market because it was “too human”.  The Dorian model was too emotional and unpredictable, as opposed to the newer models that have no emotional programming.

The rest of the episode is spent setting up the dynamic between the two officers.  Kennex bristles at Dorian from the moment they first meet, but eventually Kennex warms up to him as he realizes that this model is not like the others.

This show is borrowing from a lot of different places.  There are elements of Blade Runner, Robocop, Alien Nation, to name a few, but this show feels like a fresh reboot of these source materials.  The two main actors are perfectly cast and I am amazed by Michael Ealy as he has the difficult task of portraying a human robot and he manages to do so in seamless fashion.  I haven’t even mentioned the females of the cast: Minka Kelly (a Joel favorite, as a detective) and Lily Taylor as the police chief.

I really enjoyed this pilot and plan on sticking with this show.  It has a Joss Whedon feel about it (though not quite as quippy).  For a network show, the special effects were top-notch.  The violence was surprisingly gritty for an 8pm show on FOX.