9:00 am - Daniel Tiger – Ugh, I wake up to this shit.  Granted, I have something of a soft spot for the show because of it’s affiliation with Mr. Rogers.  Based off of his puppets, and created with the approval of Mr. Rogers’ widow.  On a side note, I’m also pretty excited to see the new Boy Meets World spinoff, Girl Meets World.  All about Cory and Topanga’s daughter growing up.  It’s so crazy to me that I grew up watching that show every week and now those kids have kids close to the age of early Boy Meets World Cory.  Anyways, back to Daniel.   It’s probably my son’s favorite show, he refers to it as “meow meow”, I believe due to the Katerina character constantly saying “meow meow” before and after things she says.  I did grow up with Mr. Rogers, but my soft spot for this program only goes so far.  There’s only one season on Netflix, and we’ve probably gone through that season at least half a dozen times now.  I can almost recite entire episodes by heart, like some kind of bizarre children’s versions of people that go to theaters to recite all of The Rocky Horror Picture Show along with the crowd.  Racism is all around us, people, and we have to do all we can in our power to combat it.  That’s certainly not one of the themes that Daniel Tiger would tackle, but it brought about the subject in my house.  My wife made an offhand comment while watching the show that she was surprised that the two black adult characters in the show weren’t a couple.  She insisted that she didn’t mean it in “a racist way” but it’s that sort of casual racism that we have to fight against hardest.  Casual mild racism sneaking it’s way into regular conversations is scarier to me than KKK rallies, at least I know who is insane there.  All of them.  They so conveniently wear those bedsheets.  Anyhow, my wife is not racist, but I’m sure she would be open to read questionable literature.

11:00 - Madden 11 – Alright, I know that this isn’t a television show.  But it’s something that it  is on my television and I would like to show you.  The Super Bowl is tomorrow and let’s get in the spirit.  First off, I think EA is a shitty company.  Each year a new Madden game is released and each year there is only tiny, gradual improvements.  Graphically, gameplay, and atmosphere-wise.  This last Madden game is one of the worst offenders, EA promised dynamic sidelines and all sorts of neat features that were not delivered in the final product.  They played it “safe” and released the same fucking product with minor graphic improvements.  As a result I don’t buy new Madden games hardly ever.  I mean, hell, the only people really do get them every year is for the updated rosters.  It’s a shitty extortionist system and I don’t support them.  THAT BEING SAID, the games themselves are still fun.  I’ll play Super Bowl mode as the Seahawks vs the Broncos.  Wilson vs Mann…oh wait.  Outdated rosters, Hasselbeck vs Orton.  I’ll play as the Seahawks because I don’t really like the Seahawks and I fuckin’ suck at this game, so if I lose at least I’ll have the consolation that the Seahawks lost.  Then I went and fucking won 14-10.  At least I’m a winner.  If you’d like to congratulate me, I take personal checks and sexual favors. 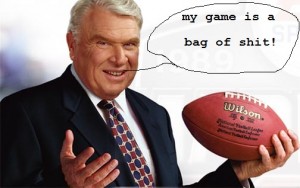 12:52 – Kroll Show – With the kid asleep I’ll burn through some shows that I’m not really comfortable watching around him and my wife doesn’t want anything to do with.  The Kroll Show is pretty unpredictable, and I’m a huge Nick Kroll fan.  It is hit or miss, but that isn’t saying anything.  Calling a sketch comedy show “hit or miss” is one of the laziest fucking things you can do, it’s obvious as shit.  Of COURSE it’s hit or miss, I can’t think of any sketch comedy that’s a hit every time.  This show hits pretty well sometimes.  It’s probably an acquired taste, not quite as good as The Human Giant was, but the comedy is in the same odd vein.

1:55 – Mitt – Turning to my Netflix list I was about to start the series Friday Night Lights that I’ve had in there for a very long time, and my friend Joel has been bugging me about forever.  I came so close, but decided I didn’t want to watch something that I’d need to fully invest my attention to, as I’m playing through Metal Gear Solid 2 on my Playstation Vita and just want some background noise.  I wasn’t a huge fan of Romney, but I’ve heard good things about this documentary and thought I’d give it a shot.  It goes back 6 years tracking his run for president the first time in ‘06 to his ultimate loss in 2012.  I’d agree with most of the things that I heard about it, Mitt actually comes across as a likeable, family-oriented human being.  The Mitt we saw leading up to the 2012 election was not nearly this relatable and came across very android-like.  If he was packing Data’s strength along with his emotionless face, I would have voted for him in a second.  Early on in the film, within the first few minutes Romney is polling his family on the pros and cons of running for president.  One of his sons says that he thinks his dad’s got a good shot if people got a real sense of who he is.  I think that’s a real problem with the campaign.  Even if it doesn’t seem to matter to the welfare of the country, people like to know their president is packing a personality.  Mitt shows his personality here, he makes fun of his own hair, he’s a fan of O Brother, Where Art Thou?.  I can’t help but feel like if this kind of documentary had come out before the election, it might have been an even closer race.  I still would have voted for Gary Johnson, though.  I’m a rebel, open your eyes sheeple!  *dons leather fedora and Guy Fawkes mask and raises fist*  Also………..if you guys didn’t know, that last part was sarcasm.  I figure most of you will know, but I don’t want any percentage of you thinking I could be that level of douche.

4:00 – John Mulaney: New In Town – I love John Mulaney.  Sometimes he guest stars on The Kroll Show in a segment as an old Jewish guy and he cracks me the hell up.  I’m watching this with my son up because I figure that John Mulaney looks like he’s 12 and he’s generally pretty clean.  He throws out a few f-bombs in there, but mostly it’s okay.  Some of my favorite moments from this comes from John ripping on Law and Order: SVU.
6:00 – The Many Adventures of Winnie the Pooh – Fuuuuuuuuuck!  Fuck!  You guys, you seriously don’t and will never understand how much this movie drills into my brain like the slug in Star Trek II: The Wrath of Kahn.  My son has seen this movie AT LEAST a dozen times and he still requests it every time I ask him what he wants to watch.  Pooh sounds like an old lesbian.  So does Rabbit.  And Piglet.  Why are they all old depressing lesbians?  Eeyore is literally just depressed, like that’s his thing.  What kind of childhood imaginary play toy is a depressed ass?  I guess Tigger is the “cool” one because he’s weird, but his idea of fun all revolves around fucking bouncing and hanging around Kanga, who I think is like 4.  Christopher Robin, you’re a psychopath and I hate your toys.

9:00 - Black Sails Series Premiere – This is okay.  It’s not amazing, you don’t NEED to set aside time for this new show, but it’s pretty entertaining.  It follows the adventures of Long John Silver when he was younger and just went by John Silver.  It’s Starz so there is plenty of sex and violence, and it doesn’t seem too over the top.  It seems to glorify the pirate life a little bit, maybe not as much as the Pirates of the Caribbean movies or anything.  To bring things back full circle with my wife, we were watching a lesbian scene in this show and she mentioned that it was getting her kind of hot.  I accused her of homosexuality, and she claims that getting turned on by girl on girl stuff doesn’t make her gay.  What?  HOW is that not gay?  Girls get away with that sort of shit far too easily.  If we were watching Dude, Where’s My Car? and I told my wife that the scene of them making out at the stop light was getting my dick hard, it would be totally gay.  So to re-iterate, my wife is not racist at all and is entirely heterosexual in nature.  I need to tell myself these things as I go to sleep tonight.