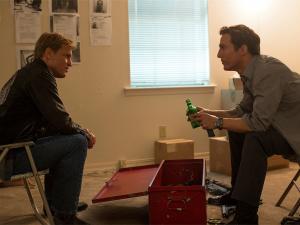 I was all set to rip the shit out of True Detective this week.  I’d given it a reprieve two weeks ago, probably against my better judgement.  There was no episode on Super Bowl Sunday, allowing all of my problems with the show to fester and ferment into a cross-pollinated fireball of alcohol-fueled bacterial malaise (I don’t know what that means either.  It’s what came out).  And it was up against the triumphant return of good-but-usually-not-great Walking Dead Season 4.

And then the show decided to get good.  To ditch all of the existential hocus-pocus bullshit dialogue (speaking of bullshit, during each previous episode I’ve found myself speaking back to McConaughey’s Rust Cohle as if I were McConaughey’s character from How to Lose a Guy in 10 Days.  When he said something about the eternal nothingness that is the human soul, I say “bull-shiiit”.  Underrated rom-com, How to Lose a Guy in 10 Days).  They sped up the collapse of Woody’s marriage, and instead of depicting his wife as the quintessential “I’ll never leave you” wet blanket, we instead get a powerful woman saying “fuck you fuck you fuck you get the fuck out, you mothafucker”.  Total 180, that.  And we get the final 15 minutes, which certainly were the best 15 minutes of TV I’ve seen this year.

I’ve given this quite a bit of thought, and I don’t think I’ve ever seen an action sequence play out on film like the 15 minutes that closed this episode of True Detective.  To shoot an extended action scene with both a direct focus on Rust and his captive that goes along with a big picture perspective that captured just how crazy these situations can be is quite an accomplishment.  While it did come off as a little manufactured, the end result was mind-blowing, and was obviously the highlight of the series so far.  I could probably go back and watch that stretch of action four or five times just to completely appreciate the direction and comprehensive vision required to put something like that together.

Real life shootouts and riots are chaotic events that can’t be scripted.  To attempt to cram them into a predictable structure usually feels like forced John Woo bullshit.  But to place the focus on the chaos itself and allow the viewer to feel the desperation/confusion/panic that comes along with it feels particularly authentic, and when the protagonist seems to thrive on the chaos, it automatically elevates him.  THAT’S how you make a badass come to life on screen.

The rest of the improvement in this episode results directly from improvements in the pace and a focus on minimalist dialogue.   It seems pretty basic, but I can only take so many plodding soliloquies no matter who is delivering them.  No matter how slow he inhales a cigarette, no matter how cool his facial hair is, and no matter how many times he contemplates man’s place in the soul-crushing emotional vortex that is life on earth.  James Gandolfini made Tony Soprano’s tough guy emo 100% believable, but he also had countless hours in Dr. Melfi’s office to flesh out the depth of the character.  Matt McConaughey has 8 total hours of screen time to navigate the same highwire act, and it isn’t a coincidence that the show dramatically improves when the showrunner slams on the action gas and dumps most of the emotional garbage.

I still find it more than a little insulting that the two black secondary characters interviewing the two white primaries have been given almost nothing to say.  At best, those two guys are black because someone in the casting department said “oh shit, we better get some black guys”.  At worst, it comes off as the plantation owner (especially Woody) talking down to his property.  I’m sure some of that is intentional, but at some point, the story needs to be driven by Black Detective #1 and Black Detective #2, since we’re obviously headed to Rust being accused of something, and I’d like that to happen sooner rather than later.

But overall, hot damn!  This is what I was expecting when the hype train was rolling in early December, and I can’t wait for more.