So when it comes to true crime TV drama, I’m obviously tough to please.  At this point, I’ve seen all of The Wire, and I’ve seen all of The Shield.  So if something new is coming at me in the same vein, I’m instinctively looking at them by comparing them to the best of what I’ve already seen.  Maybe that’s not fair, but that’s me.  I have a very tough time judging something new on its own merits, because I want everything to be as good as it possibly can be, and I’m disappointed when something that could be flawless falls short.  The mistake I made with True Detective was judging it from a “True Crime” perspective.

Because True Detective has shown at this point that it isn’t really a cop show, and detective work isn’t really intrinsic to what the show is.  The best I can peg the show up to now is something along the lines of “cerebral/occultist action drama”, but the true appeal is that it doesn’t really fit into categories.  I’ve lost the “OMG this is going to be fucking awesome” hope that I had before the series premiered, but the fact that True Detective is breaking new ground and transcending preconceived notions of what a TV series can be is leaps and bounds more important than the actual product anyway.  We can now have 8 episode mini-seasons of TV made with cinematic quality featuring world class production teams and A-List actors that don’t adhere to decades-old established “this is okay for a TV series” guidelines.  That is a colossal accomplishment.

But the fact that new ground has been broken doesn’t always mean that the product is flawless.  I thought this episode was half baked at best, falling back into some of the script and dialogue ruts that held back the first three episodes.  The detective fucking his partner’s wife, even with it being provoked by the wife, has worn out its welcome in all forms of media.  This was like Rick Vaughn fucking Roger Dorn’s wife, except with Jameson replacing Budweiser, a dirty countertop replacing a waterbed, and the lighting dimmed to just above crypt-level.  So has the parking lot brawl that follows, as well as the rouge cop first confronting authority only to be rebuffed and eventually forced to resign, driven by his own integrity.  That kind of Detective bullshit is so True that I’ve seen it dozens of times over the years.  So far, the show has been great when it has refused to follow television/film convention, so to lean on it now is disappointing.  Rustin Cohle, meet Suzanne Dorn: 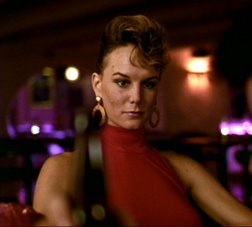 That said, I was pleased to see that the flashbacks were allowed to continue for another episode, as the disparities between the present telling of events while watching them play out as they actually happened has been consistently entertaining and at times thrilling, with the action sequences of eps 4 and 5 being the obvious high points.  Not only was the action fantastic, but the real time lies being told that conflicted with the action were then icing on the cake.  And the show really, really misses the action, especially after we’ve already seen it be glorious in previous episodes.  Once I’ve been shown something like the tracking shot at the end of episode 4, coupled with my disappointment with the first three episodes, I want more of the former.  I got it in ep 5, but it was conspicuously missing in ep 6, which made me feel like this was just a bunch of filler before we get our grand action confrontation to close the season.  And wasn’t the first confrontation of present day Marty and Rust just a complete and total letdown?  I’d rather they just said nothing and stared at each other than give us the lines that we got.

One more concern I have is that 2 more episodes is very little time to lay out an entire grand conspiracy.  I think this episode made it clear that Rust probably isn’t the original (or copycat?) killer: he isn’t a giant with scars on his body, he confronted the obviously guilty head of the church, and has been given independent corroboration of child porn activities within the church by the drunk ex-preacher.  I don’t know how effective the reveal of a primary villain will be considering we only have cursory details of his identity at this point.  What I’m hoping for?  That there isn’t a nice bow wrapping up the package this season.  I hope we get a surface resolution to the Rust/Marty story, but I hope the big picture conspiracy plot is carried over to next season, with a new locale, cast, creative vision, etc., and I’d even like the door to be left open for the Rust and/or Marty characters to return in the future.

That would add one more notable wrench in the typical creative machine that has driven TV for the last five decades. So while I may not always appreciate the content, I certainly respect the creative vision.