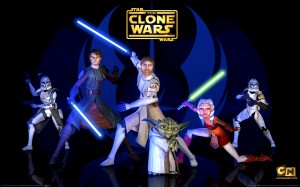 Welcome to Animation quick look where I watch a few episodes of something animated ranging from stuff based on popular licenses to completely obscure and occasionally bizarre original stuff as well.

It’s been a rough 15 or so years to be a Star Wars fan, because George Lucas pretty much took anything anybody loved about Star Wars, pissed all over it and then set it on fire. Now it’s got some new hope (no pun intended) since Disney has bought Star Wars and has plans to re-invigorate the franchise. Would I call myself a huge Star Wars fan? Not really. I loved the trilogy as a kid, but I really only still love the first movie and the Knights of the Old Republic games on the original Xbox. I honestly never had much interest in the Clone Wars animated series (either one) but with the entire series available on Netflix, Disney launching a new series called “Rebels” soon and fans claiming that this was one of the few good things to come out of the whole prequel trilogy debacle, I thought I’d give Clone Wars a shot.

Clone Wars focuses on the time between Episode II & III, mainly around Jedi Master Anakin Skywaylker and his apprentice, Ahsoka Tano as they try to hunt down General Grevious, but does occasionally have epsiodes that focus on other characters in order to present a more rounded view of the Clone Wars.

And in the six episodes I watched, the best stuff had virtually nothing to do with the more well-established bits of the Star Wars universe. The biggest problem with something like this is there are no stakes for the major players involved. When R2 gets kidnapped, are we supposed to care(although bonus bad writing points to the idiots who had Obi-Wan act as if R2 was just some pointless droid that had no value) when we know nothing will happen to him? When Yoda is ambushed on a planet, am I supposed to care? The episodes are also filled with things that just grate on my nerves, like the fortune cookie-esque nonsense that Yoda spits out in annoying backwards talk every single line (he’s not alone in this though, nearly every Jedi master has groan-worthy lines of “wisdom”) and the droids that say idiotic lines and “roger, roger” all the time and are generally bumbling idiots. Except of course when the plot calls for them to be competent on occasion.

But it’s not all hopeless. There are no Gungans so far, for instance. And honestly the most interesting part of Clone Wars is the clones themselves. Sure, they are carbon copies but they show real depth and personality and have real stakes involved while even questioning their value as an individual and worth to the Republic. The best episode I watched by far was called “Rookies” which the Jedi were barely involved with. It was about a group of clone soldiers, some without any real battle experience, trying to survive, without any Jedi help, against highly sophisticated attack droids trying to seize their base for an invasion. It was a truly great episode and showed some of the potential this series clearly has, and it’s real strength could be focusing not on characters we already know the fates of, but ones we don’t who were more on the fringes. If the show regularly made episodes like that, it would be something special, but this is one out of six episodes, not a good average. Maybe it gets better down the line, but it’s hard to ask somebody to sit through that to wait for the “good stuff” when there are better options out there that get rolling right off the bat.