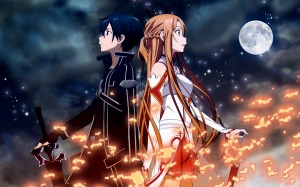 Welcome to animation quick look where I watch a few episodes of something animated and tell you if it’s worth your time.

In the year 2022, a hotly anticipated massive MMORPG, Sword Art Online is released and snatched up by gamers around the world. What makes Sword Art Online special is it’s “Nerve Gear” VR helmet, which makes everything feel more real. But once players log in, they find they can’t log out. The batshit insane creator of the game has locked everyone in and nobody can get out until the final level of the game is cleared. Worse yet if someone dies in the game, they die in real life. So noobs are truly fucked.

The show focuses on “Kirito”, who was an early beta tester and has some advanced knowledge, but is also pretty damn good at the game. He and other beta testers are actually outcasts as others think they have inside info they are holding back, which I think is a great angle to go with. Kiriko mainly fancies himself a solo player for this reason. But he has made a few friends, namely Asuna, a skilled swordswoman who is the glaringly obvious love interest, but they work pretty well as a couple so it’s fine.

At it’s base, Sword Art Online has a ton in common with your standard fantasy anime, but the interesting characters and the fact that while it’s a game that everyone should be working together to beat, but people are assholes and that keeps it interesting. I mean seriously, people murder each other in Sword Art Online, knowing that it will kill them in real life. That’s both fucked up and awesome. A guild leader gets murdered because she sold an item and another guild member wanted to keep it. In a video game. Over a fake item for fake money when they should be focused on killing the fake boss so they can get the fuck out of there. That’s human and awesome. Some do it just for fun, which is normal in a regular MMO, but again adds a level of awesome I wouldn’t expect.

To be fair, it’s not all fun and murder. Kirito and assorted friends look for rare items, protect the weak and occasionally remember to beat dungeon bosses so eventually they might get out (it’s been a little over two years in at the point I’m at story-wise). But they also start to like the life they have built in Sword Art Online and the friends they have made and are starting to get torn about what they really want.

Of course there are lingering questions. Namely why did the designer of the game do this? But also, what if there’s a fucking power outage or the internet goes down? And how they hell are their bodies staying alive outside the real world? I suspect we may never get a real answer to even the first question besides the guy being a crazy nutjob, but Sword Art Online still manages to keep me engaged and interested in the virtual world it’s presented and I’d highly recommend it for anyone looking for an entertaining fantasy anime.