Okay so like holy bajeezus! This week I and many of you got what we finanllllllly needed… A great episode!!! The last two have been “okay” with Darryl and Beth, but they are making mistakes left and right being silly and now they are split up and Darryl is with what appears to be some grim looking dudes.

This week is all about Carol, Tyreese, crazy Lizzie and Mika (or Micah? I have no idea) and of course little ass-kicker herself; Baby Judith. We see the episode open up with them shoveling along the railroad and they go off to look for food (? I think my dogs were barking at that point) And they see a house. A pretty decent house. It doesn’t look as anal and well taken care of as the cemetery house from last episode but a nice house none the less. Carol and Tyreese (an unlikely pairing) have great chemistry together and I don’t mean sexual. I mean they play well off each other. You know there is tension and a history but yet everything seems to happen organically. They actually have the forethought to “clear” the house before they let the girls come in. I’m telling you this is something that should be Zombie Apocalypse world 101. Not sitting down eating Jam and playing drinking games (I’m looking at you Beth and Darryl!).

As the girls sit there with baby Judith letting the adults make sure the house is safe, there is some pretty eerie possible foreshadowing. A little grave with bronze baby shoes. I immediately think poor baby Judith is going to bite it. I’m hoping not because as I’ve pointed out this show is little on the hope in a jar side. Baby Judith I believe, is the only beacon of hope that can bring this group back together. She is much more important than she may ever realize.

Earlier on the railroad a walker gets trapped in the tracks and as Tyreese goes to kill it Lizze begs for him not to. She is so flat out wrong about what the walkers are. Its not that she isn’t getting it, she will never get it.

This becomes evident as Carol is brewing tea in the quaint kitchen (which how awesome it this house has propane still?!!!! Again I think about this shit too much but in “The Stand” by Stephen King everyone got to “pick” a house and set it up as their own, I always was drawn to that part of the ZA ( not that it would be fun but I was always fascinated by it). Anyway Lizzie is playing freeze tag with the Walker. For christ sake. She can’t just play TV tag with Mika? they can’t just spout of “Sam and Cat, Sponge Bob, Survivor”? She has to play tag with a walker. See she doesn’t get it.

It escalates from there. Carol expresses how Sophia died and how her being too sweet is what killed her. She parallels Mika and her own daughter. Lizzie just going on with her blank expression and the differences between the two sisters couldn’t be more apparent. Mika can’t kill “alive” people and Lizzie can’t seem to kill a walker but has no problem putting a bullet in between the eyes of anyone. See there can be a healthy balance. It reminds me of “Wife Swap“. They always pick two ridiculously different moms. A slob who doesn’t make her kids bathe and enjoys they all smell like meat thats been left out on the porch for a forte night vs a super anal clean freak mom , who scrubs her children with a Brillo pad and bleach. See its ridic. You can meet in the middle. Kill walkers and kill people who threaten you.

We learn that Lizzie is the one who has been feeding the walkers back at th eprison as she returns to the railroad walker and tried to feed him. I have kids, I have 2 daughters a tad bit older than Lizzie and Mika. I know this is make believe, but I’m confident in the fact my daughters would know that a damn zombie is a damn zombie. Even on the Telltale Game “The Walking Dead” Clementine knows she has to kill Lee. She KNOWS IT!

Carol and Tyreese go off not too far to look for a deer to have as meat. Carol is not seeing the full picture of Lizzie’s psychosis. She’s not privy to all the info we have on her, or maybe she’s not looking for it. You can tell something weird is coming, there is never an ice cream sundae on this show.

Tyreese tells carol of his dreams of Karen and how he only sees a stranger killing her. I’m yelling at the TV at this point”Shut up Carol! Don’t do it”! I don’t want her to reveal SHE killed Karen (and David) I don’t think it will give Tyreese what he needs right now. They walk back to the house and we see Lizzie. Jesus Christ bananas. her hands are covered in BLOOD. yes fucking blood. I’m so worried for baby Judy. I can’t hear her and the camera pans to the ground. baby Judith is okay and Mika ids dead. I actually GASPED! This was some Breaking Bad killing Hank, ER Lucy getting stabbed, Dallas “who shot J.R.” type of shit. 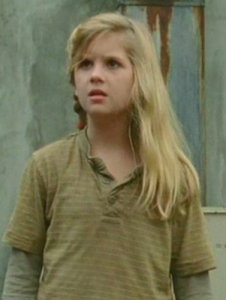 Tyreese and Carol are in shock and trying to keep it together. In that one moment it all comes to fruition. Lizzie is sick, and I’m sorry this is the ZA, they don’t have time to treat her with meds even if they could find some at a pharmacy. That’s not how mental illness works. Lizzie tries to explain she wants Mika to come back, in fact she didn’t “hurt her brain” and then Carol will see.. she”ll see what Lizzie is talking about. They aren’t just undead soulless monsters, they are playmates? The fuck?

Lizzie also confesses she was about to kill baby Judith before they came up. Carol nervously points out “she can’t even walk yet”… because what the fuck do you say to a little girl lost? She convinces Lizzie to let Tyresse take Judith to the house and she can tie up Mika in case she becomes dangerous. Lizzie obliges and Carol has to obviously take care of Mika before she turns. I
m literally reeling from this. Its a gut punch. yes Lizzie has been a weird kid for weeks now and very detached, but this was hard. that was HER SISTER. I immediately think if she can do that to her sister, her only family left in this world… she can do that to ANY OF THEM. Its clear what Carol is going to have to do.

She takes Lizzie for a walk and Lizzie begins to get upset “Are you mad at me” she apologizes for raising her gun to Carol. She still ins’t getting it. There is no hope for her to ever get it. You hear off screen a single shot. Which bookends Carol’s poor sweet Sophia’s fate by Rick. (which was also a gut wrenching scene). 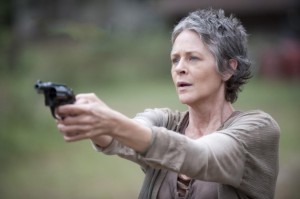 Carol and Tyrese are now sitting in the house talking about what happened. Carol now decides to confess what she did to karen. I really don’t know how Tyreese will react but Carol has some big balls to do this. But maybe she was sick of carrying guilt over a decision she felt just in doing? He says he forgives her but he will never forget, so that may foreshadow some shit to come. One thing is certain they must leave this house in “the grove” . They need to see if their group may be at “terminus” and so they walk on. Melissa McBride should straight up win a g’ damn Emmy for this epic yet hard episode!

Next week the previews are always so mishmash its like scenes played to dubstep, So I have no clue whats about to happen. But again “terminus” doesn’t sound like Happy, Texas.