Holy bajeezus! Its only one episode until the season finale, and this past week was not a filler episode!
The tension is building up for our separated groups and Glenn and Abraham and company are following Maggie’s bread crumb rail (Blood Sharpie signs) to go to Terminus. Again, sounds like a nasty place, but if Mr Shelly was going there I guess I’d be compelled to seek him out.
Our rag tag team comes to an impasse when they reach a dark tunnel. Reminds me of the tunnel scene in 28 Days later (tunnels and virus/zombie stuff is never a good thing). Sargent Abraham Ford decides he thinks Tara must love Glenn, for she is following him around like a puppy. He is slightly embarrassed when she reveals she likes girls which also upsets Eugene who may have been sweet on her.
Abraham says they should walk around the tunnel even though it may take a day (and I fucking agree!). Glenn of course NEEDS to be with Maggie right now so he decides the dark tunnel with the possibility of 20-100 walkers is a better plan.
Meanwhile Carl, Michonne and Rick are walking and seem to be ahead of all the groups (?) and Carl and Mcihonne are playing around on the tracks trying to balance. They’ve challenged each other. Rick asks what they are doing. I’m happy because again this show is bleak and fucking depressing. Worse than the Killing. At least on The Killing Holder had his one liners and banter with Linden. This show there are very very few laughs.
Then we see Darryl’s group waking up from their “alarm” system of tin cans attached to barbed wire. This shit is like inches from where they sleep. Why they can’t set up a perimeter and take turns? better yet, why do so many of them sleep outside at all? They aren’t on the Appalachian trail. I’d walk until I found a secure building for shits sake. Sometimes (a lot of the time!) this show makes little to no sense. This bandit group that Darryl is with now is beyond shady. Apparently the leader “Joe” has rules. You have to say “claimed” if you see something you want, and then Boom bazooka Joe its yours. Darryl and one of the unsavories fight over a rabbit that clearly is Darryl’s catch, but because the bandit says claimed he thinks its his. Sounds like the way only children are raised. If you remember from the episode “Claimed” that is what these idiots kept yelling while Rick was pooping his pants under the bed.

Joe decided they should split (literally) little bunny foo foo in half because Darryl didn’t know the ZA rules of their gang. Why the fuck is Darryl staying with them? He knows how to track, he has seen the signs?? He could have left in the middle of the night and high tailed it to Terminus (which I’ve already stated may not be the best idea.. .but its better than staying with this fucks)!

Back at the tunnel…. Abraham, Rositia (with a new Forever 21 outfit), and Eugene (Looks like a dead Ringer for John Laroquette)….. 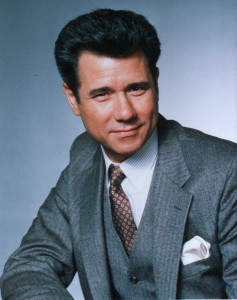 decide they will get into a mini van they found and still head toward DC. While Glenn and Tara limp and muster through the tunnel with about 15 bullets… makes perfect sense.. Abraham takes a nap in the back seat which looks like it smells like equal parts of zombie intestines and an old grandpa who smoked, while Rosita and Eugene “navigate” their way through the back roads of Georgia.  I’m hoping they find honey Boo Boo in McIntyre ( I smell a crossover event!) 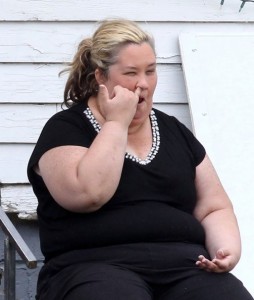 Turns out Eugene is giving Rosita all the wrong directions so they can get back to Glenn and Tara and help them. Boy Eugene seems really confusing as he wants to get to Washington DC and save the world, but also wants to help Glenn .

Glenn and Tara discover the Tunnel is collapsing and so Glenn is checking each walker he sees to make sure it isn’t Maggie. What is he going to do if he sees a beautiful farm girl walker? There are boulders and rocks everywhere from the collapse and of course klutzy ass Tara gets her ankle stuck. She tells Glenn to go but we just had death last week so I’m not thinking Tara will die. Glenn is trying to get her out of this weird rock to no avail when all of a sudden a huge group of people you can’t see pull up and start a shootout similar to the Departed (sighhhhh Scorsese should do TV).
Its Rosita, Eugene, Abraham, and Drunk bob, AND Sasha and ……drum roll… Maggie. Now I don’t think Maggie and Glenn have shit for chemistry but they are the only couple left so I cheer they are reunited (for now). She explains a bunch of walkers swarmed them in the tunnel (dumb asses should have gone AROUND) and she shot the ceiling to hit them in the heads with the concrete. They are hugging and she finds the picture Glenn took of her in the jail watchtower (i can’t help humming Bear McCreary’s version of the song) and she says “you don’t need that anymore, we’ll never be apart again”. Gee that’s not a red herring or anything? 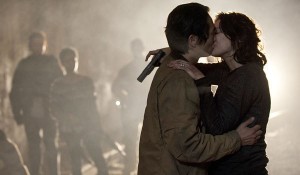 back to Darryl and the shitheads. The guy who fought over the bunny has now planted it in Darryl’s luggage (a trash-bag) to make him look like he lies. Joe doesn’t like lying. Hmmm I feel like Joe is down with raping, killing, pillaging and shitting on our back… but he doesn’t like a liar? Go figure. Turns out Joe knew his buddy bandit planted it on Darryl. The group starts to beat him as Darryl goes to sleep (WTF?) Darryl wakes up as they are moving closer to terminus and sees the bandit has been beaten to death outside the auto body shop they stayed in the second night. So now Darryl knows they will kill you if you don’t follow their rules. And still he doesn’t say “hey man I have to take a shit I’ll be back” and then run away? I used to think this zombie apocalypse would be an adventure, now i’m not so sure. 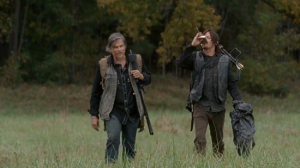 Now flash to Maggie and Glenn co…we see the group heading toward the fuckery place of terminus. Eugene said they should help out and then go to DC. Seems Eugene has no intention of EVER getting to DC. They get to a first gate and there is no sign of ANYONE. No Rick, Michonne and Carl.. whom appeared to be ahead of them. There is no locks , there is NOTHING but the sign TERMINUS. WTF? Why not scope a place out? Why just think its the girl scouts of America? I’d be scaling the outside perimeter like a mother fucker. What is wrong with these people?

They go in further: laundry tubs with old style washboards, plants and sunflowers. Definitely looks like a hippie commune. and then We see a lady barbecuing up “something” and she turns around. Her name is Mary and she is going to offer them up a plate. 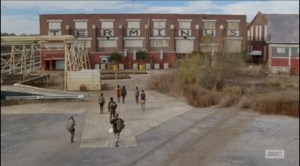 Again the preview for next week is dubstep with intestines. Rick is covered in blood so it could be anything. I’m betting on a major death but at this point I don’t really want anyone to die. i will say right here , right now, if little ass kicker baby Judith dies I’m going to have to switch to Dancing with the Stars; and i’d rather a dog fart in my face.