Ah, the Creek meets the Stream.  Welcome to Crossing Streams, the article that is completely ruled by random picks in the depths of Netflix television programming.  This week Rob and Joe were tasked with watching an episode of the late 90′s popular teen drama Dawson’s Creek.  I’ve never seen it, and I still don’t have to.  Thank god.  Teen dramas just aren’t my thing.  Maybe if I grew up on a farm and was retarded they might appeal to me, but I didn’t so they don’t.  I stay untarnished by the teenage nonsense, let’s see how Joe and Rob handled it.

Joe - So, Dawson, Joey, Pacey, etc. etc. I’ve made it to almost age 34, without seeing a single solitary second of this show, and unfortunately that streak has come to and end courtesy of Crossing Streams.

Quick synopsis, Season 6 Ep 2, Dawson FINALLY fucked Joey last episode, and now they’re dealing with some morning after shit. Not Morning After pill shit, but just with the shit that young, affluent white people deal with the morning after they fuck. Pacey (seriously, Rust Cohle should have been named Pacey Witter on True Detective. It’s only marginally more ridiculous.) is gonna be a cutthroat stockbroker, and he has a goatee. And the other people are doing other things. Oh, and it’s Joey’s 19th birthday. She gets pissed that Dawson fucked her even though he had a GF, which ruins her surprise birthday party, and then they break up again. Probably would have been a fairly realistic way to end the series.

What’s more fun is to imagine this episode fitting in to other versions of the actors and their characters.

1. Dawson is devastated by Joey’s attitude, and it affects his entire outlook toward women. After all, he was a Texas state champion QB who doesn’t want your life. This leads him directly into The Rules of Attraction, and OHHHHHHHHH NO FUCKING WONDER HE’S SO FUCKED UP.

2. Joey realizes that she totally blew it. Dawson was hopelessly in love with her, and she just showed him the door. How to fill the colossal void in her life that he left behind? Oh hai Tom Cruise, wait you want to marry me, but you’re 5’1″, what do you mean 5’1.5″, wait Scientology what’s that, you want me to what for four hours in front of paparazzi cameras, well okay we should probably get divorced. Small wonder she ends up married to Adam Sandler in one of the worst films ever made a few years later.

3. Wait, Pacey’s going to be a stockbroker? Pacey, I’d like you to meet someone, his name is Jordan Belfort. By the way, have you ever tried qualuudes? Don’t worry, everything will be fine. Yes, that’s Jonah Hill’s penis.

Fantastic. Love it, much more than the show. I guess it’s really not THAT bad. But a few other things. It’s funny to watch shows from the early 2000s now, they were just so cavalier about what would now be considered blatantly offensive gay jokes. There were at least four of them in this episode! Maybe one doesn’t catch my attention, but four, holy fuck! And also, the trope about leaving a note on a pillow the morning after you’ve fucked a girl. THAT CANNOT EVER WORK. WOMEN INSTINCTIVELY WAKE UP AND SMELL BLOOD THE MOMENT YOU MOVE IN THE MORNING. This is fact. It was nice that they ran it all the way back to reveal that Dawson was actually breaking up with the “girl he’d been seeing” (only white people refer to it as that) when the note said he “went to get breakfast”.

Look, it wasn’t horrible. Maybe not even as bad as I expected it to be. But I just couldn’t see devoting years of my life to something like this. I guess I’ll never be a teenage girl, FFUUUUUUUUUUUUUU

Rob - I have never willingly watched a teen drama. From an early age, I was mainly a comedy nerd or a cartoon nut. When I got to college in 1994, most of my television viewing consisted of MTV or Sportscenter. I began to watch more dramatic TV as I left college, so perhaps I just missed out on the genre of teen drama. It never interested me in high school. Some of my fellow students were watching 90210 at the time. I remember My So-Called Life made a huge splash on MTV. None of those shows interested me for whatever reason. I seem to remember thinking that those shows weren’t “cool” (as though I even knew what that meant, I was and still am pretty uncool).

When “Dawson’s Creek” began, I was 21 years old and about to finish college. It definitely was not on my radar at the time. The only real exposure I had to the show was when James Van Der Beek was in “Jay and Silent Bob Strike Back” and claimed that Jason Biggs “wouldn’t last a day on the Creek”. I was pretty sure that this show was not my cup of tea. So when Crossing Streams told me I had to watch an episode of “Dawson’s Creek”, I once again begrudingly accepted. Episode 12 of season 1 was my assignment. “Beauty Contest”. The short description on Netflix says “Joey and Pacey enter a beauty pageant”. Hoo boy, what am I about to get myself into? Isn’t Pacey Joshua Jackson? How do I words?

So it appears that this show revolves around four kids in this small coastal town. There’s Dawson, Joey (short for Josephine, played by Katie Holmes), Pacey (Joshua Jackson) and Jen (Michelle Williams). Jen and Dawson used to have a relationship but now they are just friends, and Dawson is just friends with tomboy Joey, but this episode is going to change all that after Joey decides to enter this dehumanizing beauty pageant in order to try to win $5000. This episode basically stole the plot from “She’s All That” (or maybe vice versa since that movie came out shortly afterwards), where a previously unnoticed nerd (because Katie Holmes is obviously very plain and unnoticeable) gets glammed up and all of a sudden pants are tight.

All of the characters seem to come from humble lower-class backgrounds. Pacey and Joey enter this contest because they need money to extract themselves from their current situations. Joey wants to go to a college that is on par with her feminist intellect, so she ends up prostituting herself in order to win that cheddar. Pacey has a rough homelife and he wants to emancipate himself…the $5000 would be enough money to move out and rent a sweet place on the water. He pushes for equal gender rights and is allowed to enter the competition. Dawson turned both of them on to this contest as he is a volunteer for whatever reason. Jen decides to help Joey in her quest to win the prize and attempts to become better friends with her rival for Dawson’s affection.

The dialogue and plot of this show are just ridiculous. I don’t think I can enjoy teen dramas anymore because the storylines have absolutely no gravitas to an adult. Watching this episode, all I could think was “It Gets Better” or “I get why the writers are trying to influence kids’ perceptions of things, but c’mon”. And I’m sorry, I just don’t buy that people would think Joey was ugly because she is “tall” (didn’t know 5’9″ meant you were a Shrek-esque ogre in 1998).

Joey ends up singing (more like caterwauling) a song from Les Miserables. Pacey decides to perform a magic act as his talent (I thought it was a huge copout to not have him dress in drag), but he is told that he has no chance of winning the competition. He ends up changing his act to a dramatic performance of the “FREEDOM” speech from Braveheart. Uber-cringeworthy. Joey ends up winning runner-up as she sacrificed her dignity for a coupon to the spa. She would’ve given up less dignity by blowing a sailor in a back alley.

It was cool to see this foursome at such young ages. They are all right around my age (James is 38, Joshua and Katie are 35, Michelle is the youngest at 33) which means they were in their early 20s at the start of the show. It was great to see the styles that “kids” wore in the late 90s, as Michelle Williams often dressed like a mom. And it was cool to see Dawson’s mom played by Miriam the Vestal Virgin from “History of the World Part I” (see, I’m a comedy nerd, that would be where I’d recognize that actress).

I don’t think I’ll be watching another episode of “Dawson’s Creek” (on purpose). If you like teen dramas, have at it.(ed. note You bet I will!) 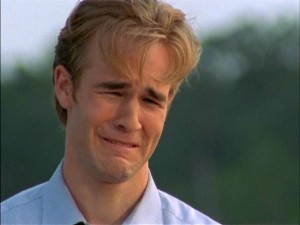