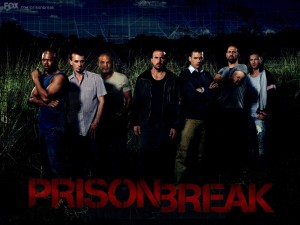 I’m appointed acting director and take over assignment duties for a week, and this is what I come up with?  To be fair, the Netflix randomizer, or Stream Crosser can be blamed for this debacle.  If 1 trillionth of 1 trillionth of 1% of the total mass of the Internet is occupied by episodes and/or discussions revolving around Prison Break, it’s too much.  So let’s add a little to it, shall we!

Rob: Another “Crossing Streams” assignment, another TV show that I avoided watching as it aired. Prison Break began airing in the fall of 2005 and I had two reasons that I refused to watch it. First, I still believe to this day that Prison Break was responsible for the early cancellation of Arrested Development. They aired on the same night and an Arrested Development/Kitchen Confidential/Prison Break block just begs the viewer to either watch the first hour or the second hour. Most people may not remember but the ratings for Arrested Development tanked so hard that fall that Fox stopped airing the show right after the new year and dumped the last four episodes back-to-back on a Friday night in February. This probably had nothing to do with Prison Break but I just remember thinking that Fox devoted a lot of ad time and general promotion to that show while unceremoniously dumping one of the best sitcoms of all-time.

The other reason I refused to watch Prison Break is that I had already seen the definitive prison genre show, HBO’s “Oz”. I am already predisposed to disregard most network dramas as they are somewhat subdued due to the censorship. Everything that your mind could possibly imagine happening in prison, happened on Oz (plus some things that your mind couldn’t imagine!). Why would I want to watch a network show that I presumed would be a mainstream, accessible version of a show I had already devoured? Plus with a name like Prison Break, it begged the questions “what happens when they break out of prison?” “Do they break out of different prisons each week?” “Do they keep getting sent back to prison?” “where’s the goddamn remote?”

So once again, I load up Netflix and pull my assigned episode “Tweener”, episode nine from season 1. The first thing I immediately notice is how attractive everyone on the show is. Goddamn network TV. They even have to make the appearance of the actors more accessible to the mainstream viewer. There is a creepy character named T-Bag who apparently rapes the weaker prisoners on the show…he would be the most handsome guy on Oz.

This is definitely not a show that you could just jump into the middle of and peep. I’m not really sure what is going on. There is a group of guys working on remodeling a room in the prison, but they are actually digging a hole in the center of the room to escape. In order to disguise the mess they’re making, they take the debris out into the yard and slowly toss it onto the ground. To anyone who hasn’t seen Shawshank Redemption, this is likely fucking mindblowing. Never mind that they don’t seem to be making actual headway on the remodel or that there are no guards in the room overseeing their work.

This show features two actors who portrayed two of the worst characters I have seen on TV in recent memory. There is Sarah Wayne Callies, who plays Dr. Sara on this show, but I know her more for her horrible portrayal of Lori on The Walking Dead. It’s probably not her fault as that character was terribly written, but based on the limited scenes of hers in this episode, she isn’t exactly Emmy material. Then there is Marshall Allman, who is playing the wrongly-accused brother of meathead Lincoln (who himself is wrongly accused, I think (?), and is on death row). Marshall played Sam Merlotte’s idiot brother on True Blood, and if you can stand out as a terrible character on that shitshow, you have really made a name for yourself in my book.

So the gist of this episode is that there are dudes trying to escape from prison (just like the title of the show!), then there is some anal rape stuff (one of the victims ends up hanging himself), and then there is a wrongly-accused character on the run from the law. I will give this show credit, the acting is ok, the writing is ok, the set design and cinematography does not look cheap. I do like Peter Stormare, so it was cool to see him have a part on the show. Just based on this one episode, my interest my piqued enough that if I were laid up and there was a Prison Break marathon on FX, I would consider not changing the channel. That’s about as ringing of an endorsement that I will give to a show that gave the world an 8-year Bluth hiatus.

Joe: Okay, honestly?  I watched 10 full minutes of season 2 episode 4 and regretted it.  I’m trying to catch up with House of Cards, and this is how I’m spending the little time I have in between GoT, Mad Men, The Americans, and the 24 season debut?

So yes, I quit watching, I couldn’t stomach it.  Hamfisted acting, stock direction, unbearable dialogue, a completely unreasonable high concept, basically no redeeming qualities.  But it did get me thinking, which is probably the point of the exercise.  Do those of us who enjoy medium to high quality television somehow need the buffer of awfulness provided by shows like Prison Break?  Yes, I feel like one of those assholes that turns down a Miller Lite and will only drink Stella poured in an approved regulation glass, but I don’t want the unwashed masses infecting my enjoyment of Mad Men.  I don’t need to hear “DUDE WASN’T THAT AWESOME WHEN DON FUCKED THAT ONE BITCH AND THEN GOT ALL FUCKED UP?!?” when I come in to work on Mondays.  At this point, it’s a proven fact with five decades of evidence that some people are inevitably going to watch shit movies (when is Deuce Bigalow 3 coming out?) listen to shit music (people 30 and older know the dangers of boy bands, but there’s no way we’re passing that lesson on to future generations) and watch shit TV (do we need to review the network lineup success rate of shows that launched the last few autumns?).  So no, I’m not going to watch Prison Break.  But on some level, I’m grateful that garbage like this exists, so that I can enjoy my 1917 Chateau Blanche Madmoiselle Blahblahblah without the Keystone Light riffraff pissing on my shoes.  Viva la 4+ seasons of Prison Break!  When they gonna break out dis damn prison?!?!?

Phil: Dramas frequently require the suspension of disbelief by their viewers, but Prison Break requires the expulsion of disbelief. This show is alarmingly complex, yet somehow vapid.

As a virgin viewer, here is what I could ascertain:

-An evil organization called “The Company” and led by “The General” is pulling all of the strings
-The prison break has successfully occurred, because there are no scenes shot in a penitentiary
-A musclebound fellow did sneak into a prison to break his brother out. One of the brothers now works for “The Company”
-You can track the location of somebody on a flip phone using a stock Windows laptop
-Everyone is after something called “Scylla”, some form of uber-weapon (which I would guess has little to do the monster from the Odyssey)
-Even bound and at gunpoint, your mother will still criticize you, offer unsolicited advice and try to resolve twenty-year-old parenting issues
-Really attractive and high-functioning pregnant women can be smackheads
-The barrier for entry for television actors is much, much lower than I would have guessed
-Apparently there are people who will watch anything which airs at 9PM on a network

In fairness, I dropped into the series at the nineteenth episode of the fourth season with no knowledge of the (wooden) characters or the (convoluted) plot lines. That said, I am pretty happy not to have invested the 70+ hours of time I would need for this piece of shit to make sense to me. If you are going to just drop in on a network drama, stick to the single-serving fare offered by procedurals.

So, as per the norm, Screensnark recommends you avoid the show that we sampled at all costs.  Unless you need a hangover marathon show.