Mad Men, the show that does not give a fuck.

At the conclusion of Season 6, the SCP partners had put Don on an open ended leave of absence, because even though he’s the main protagonist of the show, he’s also a scumbag that fucks anyone and drinks anything, and for the first time there were huge and obvious negative impacts to his work performance.  The firm has been split, with a satellite branch opening in Los Angeles, with Ted and Pete moving to Cali.  And Betty is skinny Betty, not fat Betty. 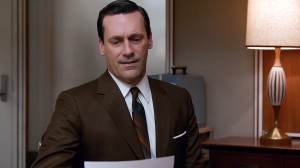 Don’s alcohol-soaked chickens have come home to roost.  Or some of them have.  Only Betty knows about Dick Whitman (I think?) so not everything is out in the open.  But Don’s drinking and fucking finally impacted his performance, when he crashed and burned last season with Hershey’s.  I actually liked the Hershey’s pitch.  But the first three episodes of season 7 have been fascinating for Don.  Always a secretive, self-made/self-destructive loner who is never comfortable being alone, Don recruits Dawn as a mole inside Sterling Cooper and feeds pitches to Freddy Rumson.  And trumping that, he goes bi-coastal with his wife, and elects not to inform her that he isn’t working.  Yes, maybe it is every married man’s dream to enjoy the benefits of being married, while enjoying the freedom of being a bachelor.  But dudes, eventually, the girls figure it out.  And they aren’t usually too pleased.  They think you don’t love them and stuff (because you probably don’t love them).

But as far as episode-closing scenes go, Don’s ending to ep1 and ep3 have been “best of the series” outstanding.  First, Don unable to close his patio door with snow pouring in, but also unwilling to make a simple and obvious fix that would allow him to shut it, leaving him freezing his balls off, does a fantastic job of mirror-imagining his entire life.  Isn’t all of this mystery and intrigue and sleaziness a little silly at this point?  But the “holy fuck did he really just do/say THAT” ending to ep3 is even a little bit better.  Going forward, I have to believe Donald Draper has a plan.  To the casual observer, it might not be a very good plan, but I bet the man has a plan. 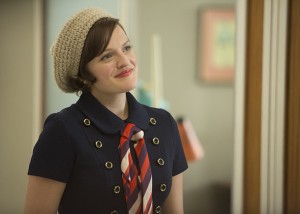 Yes Don Draper is the protagonist.  But wouldn’t Peggy-as-lead-protagonist be at least equally fascinating?  And to some degree she obviously does carry a lot of the show.  Last season Ted was definitely leaving his wife for Peggy…until he wasn’t.  Peggy’s “well aren’t you lucky, to have decisions?” line to Ted toward the end of season 6 had just copious amounts of resonation.  It’s every woman’s comment to every man, ever.  Supposedly responsible men have failed Peggy throughout the series, which is why it’s interesting but not surprising when…

…she shows up in season 7 as the underling of another vaguely incompetent, argumentative, offensive man.  Of course as the enlightened new millennium audience that we are, I think most of us are constantly hoping for Peggy to finally make a real and lasting crack in the Sterling Cooper glass ceiling.  Especially when she’s compared to the LSD gobbling hippy orgy king Roger Sterling, the testically-deprived japanophilic racist Burt Cooper, and the whiskey soaked unavailable pussy hound Don Draper.  But Michael Wiener’s constant reminder to us is, THE FUCKING GLASS CEILING STILL EXISTS NOW!.  As of 2014 Women still don’t become creative directors or partners in these types of firms with any type of regularity, so why should Peggy get to win in 1969?  And even with all of that in mind, I still couldn’t see why Peggy was such a giant bitch to Don when she saw him (“can’t say that we really missed you here” fucking OUCH) until I remembered that he was a complete asshole to her throughout last season.

So far this season, the glaringly terrific triumph was the final 15 minutes of episode 3.  Don’s return to the office, set against Betty’s trip to a farm with Bobby, was simply exquisitely eloquent visual storytelling.  Don has never been so completely out of his element, and since Don needs to be constantly in his element in order to allow his social subterfuge to be effective, the discomfort for both Don and the audience is almost physically palpable.  As disgusting as he’s been, he isn’t full-on Walter White as Heisenberg, and you can still feel sorry for him.  The scene is magnificently shot, mimicking the hustle of an office while still flexing complex characters that now have 3-6 years of backstory.  And Don’s story is ultimately Betty’s/Sally’s/Bobby’s story too, seeing that Betty and Bobby are pretty likely permanently fucked up with out a solution is just as impactful.  Mind blowing, Emmy nominatable material, this.

Be back next week with look-ins on other characters!