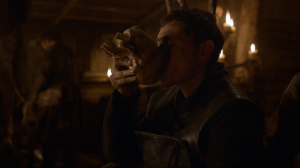 In Westeros, you’re no one if you haven’t almost been raped.  At this point, the almost raped/successfully raped camp may outnumber those who have managed to avoid the “rape as a plot device” trick.  Counting up those involved in a rape scenario (including rapers and rapees) Sansa, Cersei, Jaime, Brienne in most episodes she appears in, Ros, Osha, Dany, Drogo, all of Craster’s wives, several members of the Night’s Watch, The Mountain’s crew, I’m sure Ramsey Snow threatened to rape Theon at some point, didn’t Bran almost get raped, along with Jojen and Meera, the Hound probably raped someone at some point?  I get it, rape is prevalent in Westeros.  But even the most offensive of plot devices loses its impact at some point.  I’m hoping “fuck ‘em til they’re dead” is the last of it, because at this point, I’ll be completely shocked when someone takes someone else captive and DOESN’T threaten to rape them. 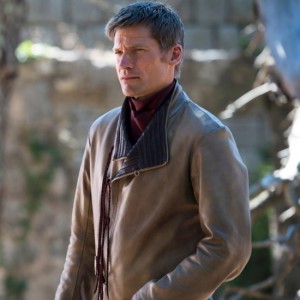 Speaking of rapers, I WANT JAIME LANNISTER’S LEATHER JACKET.  The problem is that there’s no way I could pull off that look.  In fact, I have no idea how HE manages to pull off a leather motorcycle jacket in a medieval-esque fantasy world where there are no motorcycles and no evidence of any other jackets.  Maybe you just have to have that “yes, I’d rape my twin sister in a church three feet away from the corpse of my king son born of incest” attitude to rock a jacket that by all other worldly logic should not physically exist.

Dany is well on her way to freeing every slave, that has ever lived, ever.  MINOR SPOILER: All of this slave freeing drags on for months or years in the books, and happens MUCH later than the current show chronology.  So very soon, I will have no idea what is going to happen with Dany, which is extremely exciting.  She has literally run out of slaving cities to conquer.  Also, wouldn’t it have been fantastic if Daenerys Targaryen would have marched across the southeastern US in 1863 with an army of vicious eunuchs, a crew of dirty sellswords, and a trio of pre-teen dragons, leaving a path of fire, destruction, and symbolically crucified slave owners in her wake?  Would have been my favorite part of 11th grade American History, although Reconstruction and and the Teapot Dome scandal may not have been as exciting. 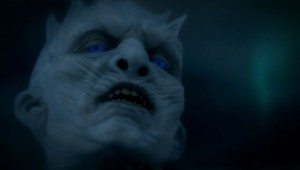 Finally this week, FUCKING CRAZY ASS UNDEAD BABY STEALING ICE KING ZOMBIES.  What happens to Walking Dead when a crazier show comes along that can show anything, have its characters say anything, and is actually really good, AND ALSO HAS ZOMBIES?!?!?  It’ll be like watching The Americans, then trying to go back and trying to watch Homeland.  As far as this episode goes, I understand that they have to remind us every now and then that yes, there are far worse things out there than the Hound’s table manners, or lengthy discussions with Lady Olenna Tyrell’s prowess in the bedroom, or Joffrey.  But I also believe that only seeing hints of these badass ice demons known as the Others is far more effective than actually being formally introduced to one.  And this episode was directed by the fantastic Michelle MacClaren, who also directed most of the best Breaking Bad episodes.  If I was her, I would have gone back for a re-write, to leave us with more zombie mystery to be revealed in bits in pieces. 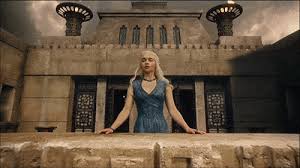