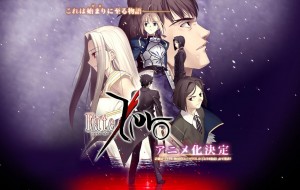 Welcome to animation quick look, you know the drill. In short Fate/Zero is Dragonball Z, but extremely fucked up. Before I get to that, let me lay down the basics.

Centuries ago, powerful wizard families created a powerful artifact that granted wises called “the holy grail”, the problem was, it only granted one wish to one person, so of course the families went to war over it (they couldn’t just wish for infinite wishes? It’s not a genie). Why is the series called Fate/Zero? I have no clue.

This eventually leads to what is known as the “holy grail wars”. Seven mages chosen by the grail summon the spirits of ancient legendary heroes such as King Arthur and Gilgamesh to do battle. There have been 3 so far, with no winner (I don’t really understand how there has no winner, you basically use the spirits like Pokemon, last one standing wins). We come in during the fourth one, where goddammit there will finally be a winner.

Now let me explained how fucked up Fate/Zero is. One of the mages is a child murderer. You see him doing things like crucifiying children and having a grand old time of it. His spirit, simply named “Caster” is a like-minded psychopath, which of course only makes things worse. This is after seeing a scene where some old dude convinces a mage to fight for him because otherwise he’s going to continue subjecting a little girl to lying naked in a room and having giant bugs crawl all over her every night. He’s not merely threatening to do this, he’s already doing it, he’s merely telling the mage he’ll stop doing it if the mage wins the grail war for him. The I laughed very inappropriately at the little girl being excited later about one night not having to sleep naked with the bugs because it was just so goddamned absurd.

But hey at least the child murderer is something relatively interesting. Fate/Zero is mostly filled with boring stock one-dimensional characters like Rider, who is your usual “I FIGHT EVERYTHING BECAUSE THAT’S MANLY” type. Or Saber who is your normal chivalrous type but with a twist-see she’s King Arthur! It’s not really clear whether they were implying Arthur was actually a woman all along or he just happened to be re-incarnated as woman for this war. Doesn’t matter though, they do nothing interesting with that.

Pretty much the only high compliment I can pay to Fate/Zero is that the animation is pretty top notch. The character designs are pretty cool (which makes the boring personalities all the more disappointing) and the battles are slick and fun to watch. But like many anime series that promise lots of epic battling, Fate/Zero spends a whole lot of time building up to said battles and it’s just not worth dredging through the exposition.