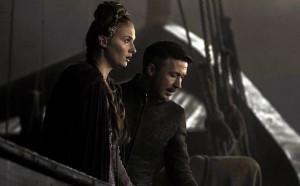 Yes, yes, yes, you can look anywhere for a review of “Breaker of Chains”, the latest fantastic installment of Game of Thrones.  If you really want a great review, why not go to Grantland and read Andy Greenwald’s fantastic piece, the depth of which rivals the show itself.

Instead, I’d like to wax poetic about the screen presence of Aidan Gillen as Lord Petyr Baelish, AKA Littlefinger.  Having known the machinations behind the Purple Wedding for around four years now, I knew ahead of time that Littlefinger had a large part to play, but he would likely be left out of the episodes leading up to Joffrey’s graphic curtain call.  But then Littlefinger gets to lead off ep 3 by showing just how much he is running shit in Westeros.  To recap:

And without the precise character notes brought to the screen by Aidan Gillen, the character would run the risk of being a hollow parody of hundreds of characters that preceded Petyr Baelish.  It’s the real genius of the SHOW Game of Thrones, as opposed to GRRM’s A Song of Ice and Fire.  Creators Weiss and Benioff were smart enough to realize from the outset that adapted smartly and shot conservatively and creatively, the source material was going to be a grand slam.  What was going to be critical to set the show apart from anything else was constantly perfect casting choices, to the point that multiple characters have had the actors playing them changed (Tommen and Daario have changed once each, and The Mountain has been played by THREE DIFFERENT GIANT DUDES).

But Aidan Gillen from the outset has shown a complete understanding of the complexity of Littlefinger’s motivations.  Baelish’s ambition is unrivaled, but it’s an ambition originally born of jealousy and then honed for years into drive, purpose, and above all precision and adaptability.  Cat Stark gets her throat cut?  Why not try to fuck her daughter, who happens to be heir to one of the oldest and most powerful houses on the continent.  And how does he take possession of her?  He knows Sansa LOVES her romantic tales of heroic knights saving the day, so he sends one.  Then he has him offed with crossbow bolts.  Gillen plays Littlefinger with the ultimate self-confidence, which is the only way to play the damn game of thrones.  To Gillen/Littlefinger, it’s not IF he will become king, it’s when.  It’s like Gillen is playing Lord Baelish as if he already is the king, but the rest of the continent just hasn’t realized it yet, so he’s going to keep taking steps to make sure that they come to grips with the fact.  And that’s the only way to play Lord Petyr Baelish, and Aidan Gillen is perfect for it.

And oh, let’s see, where before have I seen Aidan Gillen playing an ambitious and ruthless young politician hellbent on grabbing as much power as he can?  Oh that’s right, Tommy Motherfucking Carcetti.  Oh yeah, and the dude standing next to him sells ribs to Frank Underwood. 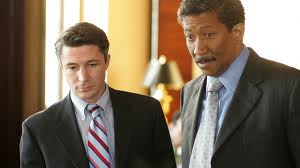 Aidan Gillen, an integral part of two of the best seasons of the best show that’s ever been on television, and now an integral part of GoT, which is a potential GOAT when it’s all said an done.  Okay, okay, maybe the first and second seasons of The Wire are better than seasons 3 and 4, but only slightly.  What, you people still haven’t watched The Fucking Wire?  QUIT WASTING TIME, WATCH THE FUCKING WIRE.  Littlefinger is on it, and he’s AWESOME.

Non-spoiler speculation here (yes I’ve read the books but I have no idea where Littlefinger’s ultimate future lies): I think Littlefinger does manage to rule all of Westeros before the end of the epic.  And if the Game of Thrones was just about seizing and holding political power with a vicious blackout-inducing stranglehold, then Littlefinger might just be the winner.  But in the political game of thrones, how to account for dragons?  Or zombies?  Or ice demons?  Or r’hllor, the red fire god?  Or the Great Other?  In the end, I think there will be pieces on the GoT chessboard that even a merciless and power-hungry politician can’t account for.  But perhaps a taste of ultimate power will be enough to satisfy Littlefinger before his demise?