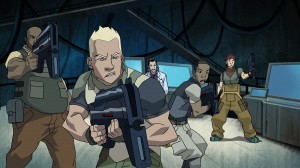 Welcome to Animation Quick Look! You know the drill, I watch something animated, tell you if it’s shit or not.

Ah the ever popular reboot of a show kids these days probably have no clue about. G.I. Joe Renegades cuts down the number of “Joes” pretty drastically (though ridiculous names like “Breaker” & “Lift Ticket” remain) and making everybody look like at best collge-age Joes if not high-school. Young is fine, but these “Joes” are supposed to have already seen plenty of action for the most part.

Anyways, this version has Cobra as an organization that basically runs everything, but appears benevolent on the outside. As Roadblock says, his momma works at a Cobra bakery, and damn those pastries are good! (not an exact quote, but pretty close). But of course they wouldn’t be Cobra if they weren’t doing some incredibly shady shit on the side like developing monster soldiers and arms dealing.

Essentially Duke, Scarlet, Snake Eyes, Ripcord, Roadblock & Tunnel Rat investigate some sneaky going-ons at a Cobra warehouse and get framed for blowing up the warehouse and murder.

They badly need to clear their name because they are on the run not only from Cobra but from an incompetent as fuck military investigation squad ran by Duke’s rival, Flint (yep, they’re rivals now). I mean seriously, there is one episode where they spend ample time in a small town helping the townspeople stand up against Zartan, who now runs a motorcycle gang. It takes them til the end of the episode to arrive. The Joes are considered terrorists, what the hell was Flint doing that whole time? It would’ve actually made for a pretty interesting episode if they had to help the townspeople while avoiding Flint and his squad. They have Lady J on the inside helping them, it wouldn’t be impossible.

The dialogue isn’t terrible, but the group constantly refers to themselves as “ordinary joes”. They aren’t fucking ordinary joes. Having people calling them GI Joes would be corny as hell too, but you don’t have to say it several times in an episode.

Ultimately, I just don’t know who this show is for. Anybody who is a fan of the original would probably consider it blasphemy, kids won’t care as theere is nothing to make it stand out from all the other military cartoons of the past decade. It’s not completely awful, but it’s nothing special either. No go joe.