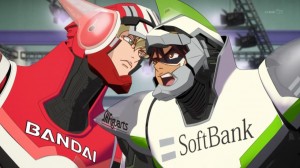 Welcome to animation quick look, where I watch smart satire, serious drama or just something plain weird as long as it’s animated, and tell you if it’s worth checking out.

Animation and Superhero satire are no strangers to each other. The Incredibles is probably the most well-known example of this but you also have shows like The Tick, where the hero and villains are incredibly silly. Tiger & Bunny deals more with the idea that being a Superhero is in fact a job, one bolstered by corporate sponsorships and a hit reality TV show. What does that mean? That means sometimes you drag out the drama by 30 seconds for a commercial break(even if there is imminent danger). It also means to make sure you always say your corny ass catchphrases for the camera, possibly while sporting the latest energy drink. It also generally means your costume is plastered with company logos.

Some are definitely in it for the recognition and fame and money, but Wild Tiger is a hero through and through. He cares more about saving people than pausing for camera angles. But he’s also reckless, constantly causing tons of property damage and he’s old news, being in the business for over a decade. In comes Barnaby Brooks Jr, a hot new young hero who has the exact same powers as Tiger and is much more willing to do things the way the sponsors want (but also tries to have a plan rather than just rushing in headfirst). Clearly Tiger feels like Barnaby is trying to replace him, and it only gets worse when he gets a new head sponsor insists that not only they team up, but that Tiger, the veteran, is just the sidekick. Clearly Tiger is fucking pissed, and derogatorily refers to Barnaby as “Bunny” because his outfit has “bunny ears” and he “hops around a lot”.

As you can see from the description, if you are looking for good biting superhero satire, Tiger & Bunny pretty much hits all the right notes. There a lot of great moments such as in the first episode where Tiger is trying to stop a train from derailing and is in fact told by the reality show’s producer to wait til they get through a commercial break because it’ll be “more dramatic” and they’ll get more footage on camera. There’s a point system based on rescues, captures, etc. and the various heroes are always obsessing about it. Lots of funny visuals as well. Like when the heroes are attending a party, but keep their identities secret at all times, so they are still wearing ridiculous masks and helmets but also tuxedos. It’s just a very smart comedy with interesting characters without being ridiculously wacky and over the top, which is kind of a rare feat for anime. I watched the first four episodes and had a really fun time with it, and will probably finish the whole thing soon (though damn you Hulu, you advertised the series in English and only the first four are. I hate switching from one to the other. The different voices take a lot of getting used to).