So for fucks sake. Yes profanity, I’m using it. I basically bit all my nails off during the season finale. I don’t usually spoil myself but I was privy to a spoiler (well actually more of a foiler) about 4 days before the season finale. Some of the story lines played out , some were ridiculous, and some I’m glad did not play out. What a fucking doozy and a surprising finale.

The show actually starts out flashback style which many people will have an issue with, and yes I’d rather have CURRENT action but the flashback gives insight to what is happening NOW. Its also great to see Hershel alive and kicking his one leg. man i miss that man, talk about an epic character. We then flash to Rick all bloodied and looking straight from a brutal fight all by himself in the current timeline leaning against an old Bronco type vehicle. Cue the epic theme song that I have as my ring tone (don’t judge me).
The (flashback(s) show us that it was Hershel that made Rick go all “Mayberry” country bumpkin farmer. Its a subtle touch. You never really understood why Rick wanted to be a pig and bean farmer at the beginning of this season at the prison. I mean it makes logical sense. You will not always be able to hunt deer, rabbits and other wildlife, so if you can grow some produce to supplement your troops,  good for you. But Rick wanted to “just” be a farmer as Carol points out in the previous episode “Indifference”. Hershel’s point in these flashbacks is you don’t have to be all brutality and violence all the time, but the irony here is the Governor is who they were up against and no amount of farming can protect you from that kind of violence and what the world has become. There has to be a happy medium. Violence with farming maybe?

We find our post Zombie Apocalypse modern family Rick, Michonne and Carl on the road to Terminus and it does strike me…we seem to always be on the road to somewhere. Its hard to watch this show and not cross over zombie lore you know from print, TV, video games and movies. You know in a lot of movies and such that movement is key. I personally think sometimes you do need to hole up somewhere, fortify and protect. But I’m not a show runner. In the comics; which I have read, a good chunk of the time they are moving, so it makes sense they will always be doing such in the series.

I’m glad the focus is on these three. We haven’t had much Rick this last half of the season and he is out hero, love him or hate him (I’m a woman so I love his skinny ass). You know in the back of your mind Darryl and his knew douche-bag crew are hot on their tail so the tension starts immediately. Carl hears a man crying for help but he is surrounded by a 90′s style mosh pit of walkers. Jesus. I even say out loud “you can’t help him” and they seem to agree.

They find an old Bronco type of abandoned vehicle and stay for the night. Carl is inside and Rick and Michonne have a fire and a talk and roast up a bunny. I never get why there are NO BUILDINGS anywhere in Georgia? I’ve been to Georgia and there are indeed buildings. We even have trains where I am from and buildings are all over the place. But not in Georgia. I guess I just think the threat is too great from both psychopaths and walkers to just be doing an Outward Bound style camping trip all the damn time.

And gee, I’m right. The damn scrubby bunches of oats come along and stick a gun to Rick and Michonne’s head. Carl is awoken and trapped in the car. This isn’t going to end well. Joe says Rick made a mistake killing Larry (is that his name?) on the shitter and letting him turn. I don’t get the loyalty as they killed one of their own last week for stealing a bunny. (Which reminds me Anya from Buffy the Vampire Slayer would be shitting her pants right about now!)

I’m literally watching from behind a pillow. There is a fat marauder who takes Carl form the Bronco as Darryl emerges from the dark. He tries to explain to Joe these are good people.Darryl even offers himself up if Joe wants an “eye for eye” type revenge. Joe decided “nope”… he doesn’t like any of them and he’ll kill them all. Two of the Village People kick the shit out of Darryl while Rick and Michonne seem helpless trying to figure out what to do. It is being heavily implied Carl is about to get accosted in a uncomfortable TV land way. This shit is all happening so fast, Mr Shelly is yelling at me to calm down, my dogs are barking! Mass hysteria!!!!

Rick then finally head butts Joe, he drops his gun and all this mish mash shit happens and Rick goes Full Metal Jacket on his ass and bites…. yes B-I-T-E-S his neck. I kinda knew it was coming from the comics but still its a moment that takes your breath away. (Slow Clap The Walking Dead). Michonne wastes no time and stabs her assailant. Darryl takes care of his. And Then Rick basically filets the chubby soon to be child rapist … and boom thats it. Shit was real. Shit was crazy. Shit went down.

So now the scene from the beginning where Rick is mangled in Joe blood makes sense. Rick is not fucking around be a pig farmer any more.

Michonne comforting Carl in the Bronco and Darryl and Rick talking. Darryl is feeling guilty for being with these dirt bags and Rick assures him he loves him lke a brother. In fact he says :you’re my brother”. Now Mr Shelly is really angry because I’m shedding tears . This is huge. Daryl lost Merle and Rick being his “big brother” is huge.

Okay on with Terminus.

Now Rick and Michonne always seem to have more sense than the rest of the group so they with Darryl and Carl stake out the outskirts of Terminus. It seems quiet. But dammit you know this shit isn’t a good place. Even if you haven’t been spoiled, you know this isn’t Passages in Malibu waiting for you to kick your opioid addiction on a beach. Rick decides to hide the guns in a hole because he doesn’t know what might happen. Carl and Michonne talk. Michonne is worried that Carl thinks his dad is a monster for what he did back at the Bronco. Michonne  then shares her story of losing her baby Andre. Finding her boyfriend and his friend getting high in a refugee camp and hinting thats the reason Andre got killed as she was on a supply run. It makes sense because she made them her “pets” . She is pointing out she might look like a monster too. But Carl re-assures Michonne, he’s not afraid of Rick and doesn’t think he is a monster but doesn’t want to let him down. Carl has some pretty bad thoughts too and is afraid his dad will think he’s a monster. Okay he’s a monster, she’s a monster, I’m a monster.

Jesus.. there is a lot of stuff happening in this episode. Okay now we enter Terminus. Now they check the place out and scale the fences. They all have weapons except the aforementioned bag of guns and enter what appears to be the back way in. We see a lady on a HAM radio of sorts recording the creep “Those who arrive survive” slogan. Dammit!! Why aren’t our fearless leaders communicating with some long range walkies or HAM radios??!! I’m not an expert but shit, it should be mentioned! Anyway the place looks like a sewing factory? People are just walking about and they all have a place to be. So then this skinny guy sees them and is taken back but comes off pretty smooth. His name is Gareth ( what kind of g’ damn name is that?) he says they came in the back way but they are still welcome. He asks them to place their weapons down. They of course hesitate but oblige. Some other goofy guys comes to pat them down and then their weapons are returned. Seems legit . (NOT) 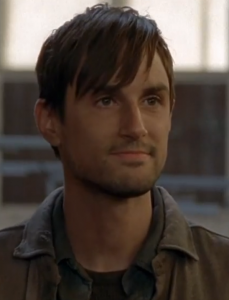 You must be screaming at your TV like I am..”Where is Glenn, where is Maggie”??!! No sign of them anywhere until Rick and company find their way out to Mary with her weirdo Amish side braid cooking up more “grub”.

Rick notices Glenn’s book-bag, the pocket watch from Hershel, the riot gear from the prison and Maggie’s hideous poncho! He knows they have his people and he draws his weapon. I cover my eyes again! Now Gareth and his group act like they got these things from people they have found (bullshit) and Rick knows its bullshit. So Rick, Michonne, Carl and Darryl all have their weapons drawn but they are clearly outnumbered. Rick has the goofy one with the gun to his head and he says to Gareth “we can wait”. Obviously these creepy ass people have a plan but that Gareth is as cool as a cucumber. He says its obvious that Rick doesn’t trust them anymore. Then an all out shootout happens. They have snipers on the roof..(why didn’t they see them when they were checking the place out before!). It becomes clear quickly that they aren’t trying to actually shoot Rick and his group but “herd” them into one spot. Michonne, Rick, Darryl and Carl are running through this maze of crazy train cards and buildings. They run by a pile of rib cages, meat and human spines.

(ya know the usual)

Also by a train car with people saying “help”! (So there are more people prisoner there). They enter a room with weird candles and what seems like hundreds of names on the floor. Also in the style of Morgan there are words painted on the wall “Never again, never trust, we first always” That sounds like Lyrics to a Miley Cyrus song? And why all those name son the floor? This is a creepy Hannibal Lechter vibe at an epic proportion. 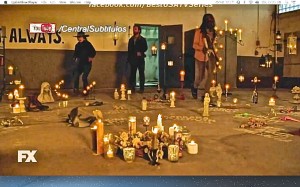 Finally They are herded to where Gareth wants them. They are surrounded even on the outside edges of the fence. They must surrender or be shot. Its pretty touch and go. Gareth wants Rick, “The Ring leader” , Michonne” The Samurai”, and Darryl ” The archer” to go to the train car (labeled “A”). Poor Carl looks like he is about to bite it. I’m literally about to burst out of my seat. He then tells Carl to follow the them into the train car. I mean its like when you think what you do if you were kidnapped.. you wouldn’t get into the car, but really what do you do when someone has a gun.. or multiple guns to your head? You comply.

Then in the last seconds of the show we see, Glenn, Maggie, Sgt Abraham Ford, Rosita, Eugene, Drunk Bob and Sasha. But noooo Tyrese, Carol or little ass kicker!???!!! They all look at each other but no hugs? Its weird but yet a relief, but yet not! rick utters his last lines “They just screwed with the wrong people” and its Arnold Schwarzenegger-esque and I love it!

So where are My Carol, Tyrese and baby Judith? Where is Beth? is she being served up as a snack or is she part of them or somewhere else all together?! OMG October is going to be like hell to wait for!