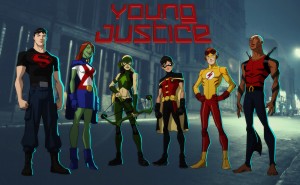 Welcome to Animation quick look, you probably know the drill by the now, I watch something animated and tell you if it’s worth your viewing time.

Young Justice is a lot different from previous animated shows I have reviewed on Screensnark thus far. Not only have I seen bits and pieces to it prior to just putting it on for actual review, but for most shows I just go in cold with little to no knowledge of what the show is even about. I have been watching animated shows based on various DC properties since the seminal Batman: The Animated Series premiered over twenty years ago. Simply put, DC may be a goddamn mess when it comes to big budget live action movies, but they’ve dominated the animated scene for decades.

Batman, Superman, Justice League, Justice League Unlimited, Batman Beyond, Teen Titans. All ridiculously awesome shows, some of which have continuity tied within series. DC did the whole connected universe thing years ago. It’s basically the high bar standard for western animation, and very little matches up to it.

Young Justice takes arguably the biggest risk of a DC show to date by focusing on the lesser known sidekicks. Because seriously, who the fuck cares about Aqualad or Kid Flash? Especially going up against D-List villains like Sportsmaster (seriously, the guy’s whole deal is deadly sports-themed gadgets and weapons). How can this possibly be good?

But what the DC Animated universe has done incredibly well it’s entire run is bring lower-tier characters in and make them interesting. In Batman: the Animated Series guys like Mr. Freeze and Scarface became storied deep characters who weren’t gimmicky jokes. In Justice League, minor heroes like Hawk & Dove, Vigilante and Booster Gold all got some fantastic spotlight episodes that made them actually interesting.

Young Justice continues that tradition, and plays well with the fact that this is a team made up of heroes that while trained and powerful, are still kids that no one takes seriously(and people even get their names wrong sometimes). Often villains underestimate them and wonder when the “real” heroes are going to show up. It’s a pretty good dynamic. As is their interaction with their mentors on the Justice League, which they resent for treating them like kids. And Superman is arguably at his most dickish in this series, completely blowing off his clone, Superboy. It’s great.

My only big issue with Young Justice is that at least as far as I’ve watched (10 episodes) is that not only do they often manage to defeat enemies on their own that give their mentors huge problems (essentially it boils down to someone on the team saying they should call the League for help and someone else going, no it’s ok this villain only almost killed half the heroes in the DC universe, but we can take him on our own!) but they don’t really establish their own villains, borrowing others. I mentioned guys like Sportsmaster, but he’s often working for a bigger villain like Lex Luthor or Ra’s Al Ghul. They really should’ve establish their own rogue’s gallery to contend with, even if it is mostly comprised of cheezy lower-tier villains. Teen Titans managed this quite successfully, no reason Young Justice couldn’t have done the same.

Regardless, it’s a very awesome show that continues the pretty great track record of DC animated shows. Basically if it’s animated and based on a DC property, you should give it a shot you’ll most likely get hooked.