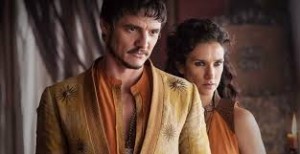 Who am I kidding.

The question that I can’t quite wrap my head around is, how can the show always be so damn good?  Other shows cannot take a brand new character like Oberyn Martel, drop him in the first few scenes of the season four premier, and have it click like it was nothing.  Other shows can’t leave out major characters like Littlefinger, Varys, and the Bran/Jojen/Meera/Hodor party of entire episodes and hum along without the audience revolting.  Other shows could never get away with having 75-100 relevant cast members without the writers completely losing any semblance of direction.  This shit just should not work.

And yet it’s probably the very ballsy arrogance of the Weiss/Benioff + Martin triumvirate that makes something that on it’s surface should be impossible succeed.  Where other shows like Agents of SHIELD go out of their way to spell out every plot twist like the audience is made up of second and third graders with a few pre-schoolers thrown in, GoT just assumes that every last one of its viewers is able to keep up with the pace, and if they can’t, too fucking bad for them.  AND THERE’S AWESOME ASS MOTHERFUCKING DRAGONS.

The “back in my day” attitude definitely has a fair share of fallacy to it, but I think there used to be more of an attitude in various artistic mediums that if the audience didn’t appreciate the art, then fuck the audience.  Mainstream music, film, and television have all been steered over the past decade toward the position that the art should cater to the masses rather than the masses flocking to the art.  And that leads to Adam Sandler movies, Justin fucking Bieber, and NCIS.

With GoT, instead we have a fantasy epic with a giant budget, a fantastic cast, and no fear whatsoever.

I watched the premier, and I don’t remember one character getting more than 10 minutes of screentime.  But in that episode, I got the following:

Oberyn Martell: Badass motherfucker, bi-sexual from Dorne who takes no shit and hates him some fucking Lannisters.

Tyrion: Lost any sense of control in his life, disappoints everyone, just can’t win.

Sansa: Completely devastated by the Red Wedding.  I think we all are, sweetheart!

The Hound: Loves him some motherfucking chicken.  Do not fuck with the Hound’s chicken.

Arya: Finally a Stark got some revenge! Even if it was killing some throw away fuck like Polliver.

Jon Snow: Jon is the manningest man that has ever manned the Wall.  And Maester Aemon, that is one kickass 100 year old.  Does anyone realize that he’s basically Dany’s great-great uncle?

Dany: Guess what, all the dudes want to fuck Dany, and Ser Jorah is Friend-Zoned for life!

And they still found time to squeeze in Jaime, Cersei, Brienne, some Tyrells, and some cannibalistic wildlings with crazy ass intentional facial scarring!!!

This isn’t really fair, because I’m a devoted book reader, and I’m one of those assholes that know the three main crazy what the fuck things that are going to happen this season.  The great thing is, I have no idea when they’re coming.  With the Battle of the Blackwater, Ned’s beheading, and the Red Wedding, I knew when shit was going down.  But viewer beware, there are DEFINITELY at least three events that will happen this season that will bring the OH HOLY SHIT WHAT THE FUCK WAS THAT NO WAY.  Wait, no, that will happen at least four times, I forgot one.

I can’t wait like Bart Scott.  By the end of this series, GoT might very well be the GoaT.