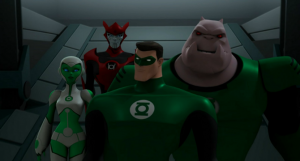 Welcome to Animation Quick look, you know the drill.

Green Lantern: The Animated Series focuses on DC comics first Green Lantern that was the concept we know of as Green Lanterns today, Hal Jordan (the original Green Lantern, Alan Scott had a green ring the was charged with a green lantern, but there was no alien factor or Green Lantern Corps or the uniform that pretty much all lanterns wear now). While he is the Green Lantern that’s supposed to be guarding Earth, he sets off with buddy Kilowog in a spaceship that’s basically Edi from Mass Effect to the far reaches of space to investigate the rumor of Red Lanterns that are killing Green Lanterns far from Oa. Why is he in space when he should be guarding his sector? BECAUSE REASONS!

In my previous review of Young Justice, I pretty clearly explained how awesome DC animated cartoons generally are, but even with that pedigree and hitmaker Bruce Timm behind this show, I wasn’t actually psyched about sitting down and watching this series for two main reasons. One, it’s CG. Now I don’t have a problem with CG in movies, but as animated CG shows tend to be incredibly low budget they generally look terrible. Also, much like everyone has a favorite Bond or a favorite Doctor who was usually their first exposure to the franchise, my first and therefore sentimental favorite Lantern was John Stewart. Sure he was pretty much in Justice League to be the token black dude, but he was still a great character and so I’m instantly biased against anyone else donning the ring.

So I was actually surprised to find myself quite enjoying Green Lantern: The Animated Series. Don’t get me wrong, Hal Jordan is totally the archetypal young rookie who breaks all the rules and still wins the day along with his practically “I’m too old for this shit” partner/friend/mentor Kilowog; but it’s a formula for a reason-most of the time it works and it works pretty well here too. It also has a clear objective that anchors every episode (at least in the 6 I’ve watched thus far) which I prefer to random wacky adventures that have absolutely nothing to do with the main plot. I mean those are fine, but too often shows (not just animated) are filled with so many one-off episodes that the main season arc only takes up 5 or 6 episodes and the rest of the season feels like a giant waste of time.

Also I really enjoyed the animation. Like I said previously, I loathe CG on animated shows because generally it’s very low-budget and looks awful. Even more recent shows like the most recent Teenage Mutant Ninja Turtles (I actually like that show just not the overall look) and Beware The Batman have an off-putting CG style. But in Green Lantern they have a very Incredibles style look and it works really well and is fun to watch. It’s not quite up there with the DC Holy trinity of Batman/Superman/Justice League, but it’s a solid continuation of that fantastic animated DC pedigree that hopefully someday they can their shit together and pump out live action movies to match.