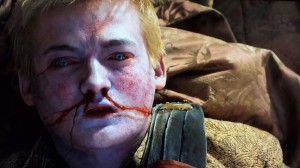 Alas, His Grace Joffrey Baratheon, the First of His Name, King of the Andals and the First Men, Lord of the Seven Kingdoms and Protector of the Realm has left us all too soon.

Or more precisely, Jack Gleeson, who portrayed Joffrey with unbelievable smarm and hearty helpings of unearned hubris and arrogance, combined with a viciousness only an irreparably damaged teenager is capable of, has left us too soon.  That is, if his “threat” to leave acting altogether comes to pass.  While his detestation for the trappings of celebrity and fame are completely understandable, it’s still difficult to see a public figure leave a calling that they have so obviously mastered at a young age.  Joffrey rightfully belongs on the short list of The Most Hated Villains in the History of Television.  And while some of the credit for that undoubtedly goes to GRRM for creating such an imminently hateable character, the on-screen execution of Joff the Awful could have strayed in any of several directions that might have turned the character into a caricature.

Instead Gleeson added depth where there could have only been shallowness, which could have had the effect of making Joffrey relatable, but instead only served to make him THAT MUCH MORE FUCKING AWFUL.  Popular villains are often referred to as “characters we love to hate”, but Joffrey went a step further, because when he came on screen the emotional tone was immediately established as petty and desperately jealous.  Gleeson played Joffrey as constantly being in on some inside joke that he thought everyone else was aware of, but which didn’t actually exist.  And being able to capture that exact level of deep seeded character flaw EVERY TIME HE WAS ON SCREEN is a precision worthy of at least a supporting actor nomination.

In the end, Joffrey’s essential Lannister qualities were on full display, even if they didn’t coincide with any of the other Lannisters.  Jaime and Cersei couldn’t have been proud of their son, Tywin couldn’t have been thrilled about his constant lack of discipline, and obviously Tyrion had a few problems with Joff’s behavior.  But Joff was just being Joff, so deal with it.  Hats off to a fantastic performance, I’m truly sad to see the sadistic little fucker go.

The obvious question is, who poisoned him?  I have insight that I will not share, but I will say that the sequence was filmed well enough to provide clues without giving away the mystery.  Mysteries have been lacking thus far in Westeros, other than the long term kind that most of the audience have forgotten are even still mysteries.  I can’t see this one playing out over multiple seasons like the poisoning of Jon Arryn (all non-book readers collectively: “who the fuck is Jon Arryn?), but I do hope that we get a couple episodes of misdirection before the culprit(s?) is revealed.

Elsewhere, we get a quick check in with the Boltons and Theon (Ramsey still a crazy fuck, Theon still lacking a dick), Bran/Meera/Jojen and HODOR HODOR HODOR (back to nothing really happening) and Stannis (Red Woman still burning people).  It was a no Dany episode, but Dany’s off twiddling her dragon thumbs doing boring shit like freeing slaves.  But as a whole, the subplots were nicely subdued in order to clear the floor for Joff’s swan song, which I appreciated.

I love this show.  I can’t understand how I can live without it for nine months a year.  I never want it to end.  Please don’t end ever, GoT.  Please.