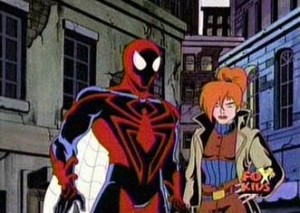 Welcome to this week’s Animation Quick look. I’ve spent the last two columns basically praising the hell out of DC animation. It’s awesome. What about Marvel though? Marvel unfortunately has a much more spotty record. Sure more recent stuff like Spectacular Spider-Man, Ultimate Spider-Man and especially Avengers: Earth’s Mightiest Heroes have all been pretty damn good. But basically up until those recent shows Marvel cartoons were a mixed bag at best. Spider-Man Unlimited tried to build on the successful Spider-Man series that ended in 98, but only lasted one season. Want to know why? Let me relay the plot for you.

Ok we all know J. Jonah Jameson is a first rate asshole and Spider-Man hates him. But his son, John Jameson is a good heroic astronaut, so he and Spider-Man are kind of cool. John Jameson is manning a one-man mission to “Counter-Earth” (wait it gets better), but somehow Carnage and Venom (who are apparently best buddies because reasons) sneak aboard and sabotage the shuttle mid-flight. Spider-Man attempts to stop them and actually fails, but everybody only sees Spider-Man so they blame him thanks to Jameson’s usual blame game tactics. The shuttle is lost and everyone presumes Astronaut Jameson is pretty much done for. Best case scenario he’s trapped on “Counter-Earth” with no way home.

No big deal, right? Spider-Man should just shrug it off and keep protecting New York. He’s dealt with being labeled as criminal and menace for decades, this shouldn’t be a problem. Nope. He somehow gets a job at NASA (they say Jameson pulled some strings, I’d like to know what clout a publisher of one little newspaper has to get a photographer a job at NASA), STEALS A FUCKING SHUTTLE THAT HE SOMEHOW KNOWS HOW TO PILOT (because you know he’s a scientist in one area and it applies to all science somehow) AND GOES OFF TO RESCUE ONE DUDE LEAVING NEW YORK TO THE MERCY OF ALL HIS ARCH ENEMIES. Spider-Man is not someone who goes to other planets, that’s part of his appeal, he’s a fairly earth-bound regular guy. This seems more like a job for the Fantastic Four, I’m pretty sure they even have their own space shuttle. And no one cares when they leave the planet. Hell the planet is usually better off.

But it gets better. You see “Counter-Earth” is different from our Earth. How different you ask? It’s run by furries! With great names like General Ram and Lord Tyger! See some random human from our Earth somehow escaped to Counter-Earth after being sick of all the war and destruction. Because apparently anybody can just go there. He found it to be just as bad (grass is always greener dude), but vows to fix it. How? By making “Bestials”, which are basically animals with human form. How does he even accomplish this? IT DOESN’T MATTER HOW!

So this leads to present day Counter-Earth where this douchebag has crowned himself the “High-Evolutionary”, Bestials run things and treat humans like trash, but everything is of course better in his view. To his credit, Spider-Man doesn’t really give a shit and just wants to get John boy and go home. But of course, John is the leader of the human revolution! Because of course some dude who’s been there maybe six months is the leader of the revolution. And both the shuttle Spider-Man came in on and John’s shuttle are trashed. But you say can’t Spider-Man just use his SCIENCE to fix the shuttles? No such luck I’m afraid. So he’s sort of just stuck here. The Bestials don’t really know what to do with him (because thanks to his clever costume, they think he might be a Bestial and apparently they don’t really hunt their own) and he doesn’t join the revolution, remaining a neutral party.

So what does he do? Basically just dick around as far as I can tell. I mean Venom & Carnage are there and up to no good, but he doesn’t know that until several episodes in, and even then doesn’t make defeating these insane criminal mass murderers a priority. He runs into Counter-Earth versions of Green Goblin and Vulture, who are not only heroes (because you know, it’s Counter-Earth, but somehow Kraven is still Kraven) but have even gaudier outfits than their Earth counterparts. And also his has a cape made of webbing. WHY THE HELL DOES HE HAVE A CAPE MADE OF WEBBING?!? 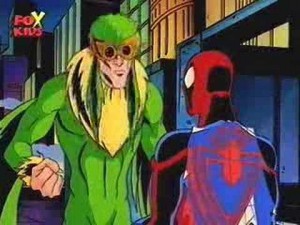 How is this guy the Vulture again? He looks nothing like a vulture…

So yeah in case you haven’t guessed this is an all-around awful show. The “best” thing about it is the animation, which is that exact same Marvel animation that seemed top notch in the 90s, but doesn’t really hold up so well these days. If you want some good Marvel cartoons, stick to anything released in the last 4 or so years, the older stuff either doesn’t hold up or was pretty awful to begin with and Spider-Man Unlimited is a prime example of this.