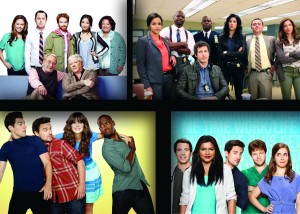 cked off Fox’s new comedy block. It started off with Dads which suffered from a comedy block of its own, more on this in a bit, and then got exponentially better with the series premiere of Brooklyn Nine-Nine and season premieres of New Girl and The Mindy Project starring James Franco. So overall the Fox Block wasn’t half bad, but it was a quarter horrible.

Dads
Dads is story about 2 guys who work at a video game production company who have to deal with their old crazy and kooky dads. Thats about the nice as this is going to get…

First off I don’t want anyone reading this to think “well you clearly went into Dads with a negative view and judgement was clouded by it” That’s wrong, I laugh at dumb shit all the time I absolutely hate Big Bang Theory but I have seen some of it before and yes I have laughed at parts but overall it just ain’t my thing. That being said I watched Dads expecting to chuckle and laugh at parts and I didn’t at all.

What a pile of shit this was. It started with a big THUD as the opening joke was “What kind of Wizard is he?” replied with “a magical one” lulz were had by many judging from the canned laughter but I can only bet those people were watching something else. Dads is so shticky and sitcom-y and it’s in every bad way possible. It doesn’t necessarily leave a bad taste in your mouth since it’s never really good to begin with. The clichés and jokes are so dated and bad that even if this came out in 2004 they would all be tired and overused.

While I generally like half of the cast in Green, Ribisi, and even Mull they all just kind of fall flat here. I’m also not above jokes that could be deemed sexist or racist, and Dads has them all out in full force in the premiere; from Asian school girls to racist dad(s) saying don’t trust the Asians and thanks to the maid (but was actually Ribisi’s wife who might be the worst actor on the show altogether), to small Asian penis jokes. That’s pretty much Dads in a nutshell. Two asshole sons have to deal with their asshole-ish dads with canned laughter to try and trick you into thinking you should laugh now. I don’t see a bright future for this but who knows its got Seth McFarlane’s name on it so that may carry it.

I give this 6 episodes until cancellation

Now for the good, and Brooklyn Nine-Nine is really good. B99 is led by Andy Samberg as a hotshot detective Jake Peralta who is a good detective but likes to goof off and is put head to head with his new by-the-books Captain Ray Holt (Andre Braugher). I laughed my ass off during this, granted after Dads maybe my bar was set lower,but there’s not much bad I can think of about this show it was genuinely funny. I really hope this stays around. I think I have been jaded in the past so I don’t have high hopes. This will probably be lucky to get a full season and Dads will be renewed by the end of the week. Lets just hope those meaningless ratings stay up. (They probably won’t) Most people I bet tuned in to see if its worth throwing on their DVR schedule (It is). FOX had a great cop comedy in The Good Guys two years ago and has a chance of having an even better one now. We just have to hope FOX doesn’t fuck it up. (They will)

Watch This. I give it a whole season with possible renewal.

I’ve only watched a few episodes of the New Girl on Netflix when my girlfriend was watching so I’m assuming this show has found its footing since it’s the 3rd season. Nothing much has changed here from the formula I saw in I’m assuming was the first season. Though I have heard Damon Wayans Jr’s Coach character might return since Happy Endings is over(*tear*) . For those that can’t stand Zooey Deschanel’s whimsy and girly girly attitude, I’m not sure why you are still watching. This is its 3rd season so get off the train already, that’s her bread and butter and its in full force. To be honest when I watch this show I get the same feeling as I did watching Girls on HBO, it’s kind of the guys that are carrying the show.

This show isn’t going anywhere for a couple more seasons or until someone decides to do something else. If you’re going to watch this though a girl should probably be present/nearby.

The Mindy Project (Which will now be referred to as TMP with James Franco)
This is another show I watched with the lady, though its not nearly as airy and light as New Girl. I like TMP with James Franco much more. Quick tangent, I didn’t really like MADtv all that much but man Ike Barenholtz, Keagan Michael Key, Jordan Peele, and even Will Sasso have been cracking me up as of late (If you are wondering about Sasso, google “Sasso Lemons”) Anyways everyone here is on point. The addition of Franco doesn’t disrupt the flow the show has created thus far. TMP with James Franco is at its best when it’s being brutally honest (almost too much so) and the self deprecating humor at Kaling’s expense is still funny while not seeming bully-ish not to mention she handles it well and quips back just as much.  One thing that I don’t like is the formerly skinny guy is fat now bit, It’s Always Sunny In Philidelphia just did this. It didn’t really lend too much to the story so I doubt it will here either except the opportunity for a few more fat jokes. Maybe it was to pull some of the fat jokes off of Kaling?

This show seems like it has a few seasons left in it. It’s biggest hurdle will be once again FOX and whether or not they decide to go a new direction if they feel somethings not working.

Overall a solid start for FOX’s comedy block, I’m sure there are a lot of those that hope Dads gets dropped and maybe Ben and Kate returns to take its place but I think McFarland has brought in so much money to FOX that he will be given a pass and be allowed to finish out the season. I hope that Dads shiftiness doesn’t affect what otherwise could be a solid block of good to great shows.