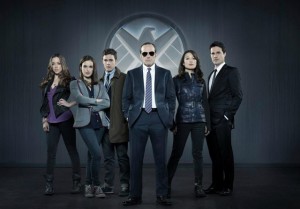 A pilot can obviously make or break a series.  In most cases, this refers to the actual survival of a show, as establishing an initial audience is often life or death when it comes to modern network programming.  In the artistic sense, this refers to tone setting, character establishment, episode format, etc.

When it comes to the pilot for a show like Marvel’s Agents of S.H.I.E.L.D. (the one and only time I will be properly typing out the official title), the stakes are a little different.  With its built in fanboy audience (OMFG It’s Maria Fucking Hill!!!), along with the potential to grab a percentage of the millions who have seen any or several of Marvel’s post-Iron Man movies, the show’s survival past the first 6-8 episodes should be virtually guaranteed.

Theoretically, this should allow the show creative and artistic freedoms that aren’t typically enjoyed by network shows in their infancy.  Instead of making a standard network pilot that lays out basic plot elements, introduces stock characters with little nuance, and crosses its fingers that it won’t get cancelled, Agents of Shield should be able to jump right into “good”, rather than skewing “safe”.

And there is some of that in the pilot (note to show producers: don’t name your pilot “Pilot” unless there are pilots.  I guess there are pilots here, so, whatever.  Fine, I guess.  Maybe it was meant to be semi-ironic).  There is certainly an assumption that the viewer has some basic knowledge of the Marvel Universe, but not so much that anyone jumping on would feel out of their depth.  Also, the show isn’t being written to specifically cater to fanboys, but also isn’t so vanilla as to insult us, which can be an extremely difficult tightrope to walk.  So Joss Whedon seems to have managed to avoid (for the time being) the largest of craters set in his path.

The larger and decidedly unexpected problem, however, might be the comfort level American network television (and admittedly, its viewing audience) has developed with procedural drama.  There were a few times during the pilot that I half expected NCIS-style head slaps to pop up, or Gil Grissom to step out of the shadows to give stern fatherly advice and wax poetic about the beauty of insects.  It’s extremely worrisome that given the opportunity to create some relatively original TV programming (Lou Ferrigno and Linda Carter aside), the creators dropped a short action sequence in the cold open, detective work and tech-savvy forensics in the show’s body, and a satisfying but convenient resolution at the end.  Yes, both NCISs and the jumble of CSIs have loyal followings.  It can be assumed, however, that this is because the audiences are on the verge of brain death.  Fourteen fucking seasons of CSI?  FOURTEEN FUCKING SEASONS?!?!?

Obviously there is a larger picture in the background, but to make the structure of the pilot so nondescript and formulaic makes it impossible to ignore the similarities to NCSIIS (the logical acronym for the inevitable NCIS/CSI crossover).  If each episode follows the bland crusade of a generic cast to contain a vague potential hero/threat, then there’s really not much more to say.  David Caruso and Gary Sinise are both recently out of work.  Why not team them up as a duo of criminal masterminds hell-bent on world domination, always two steps ahead of our shielded heroes?

The rest of the cast is passable, with the only real standouts being Clark Gregg as Agent Paulson (because we’ve seen him before) and Chloe Bennet (because her performance is pretty damn good).  We were promised the spontaneous explosion of this episode’s hero, and I wish the promise would have been kept, to put an end to his screen time.  If that’s the best casting they can do, this might be a long (first and only) season.

I would have been surprised if Joss Whedon had completely fucked this up.  I’ve read his comics, I’ve watched his shows and movies, and they are all generally above average (Dollhouse excluded).  He so far has delivered, if only in not completely fucking up.  But I have high expectations.  If the show ends up being NCIS with superpowers, I’ll be dumping it rather quickly.  The potential here is for high espionage drama (a proven entertaining commodity) with otherworldly elements mixed in.  That is what I expected going in, and that is what I’m hoping we still might get.  I’m decidedly on the fence.