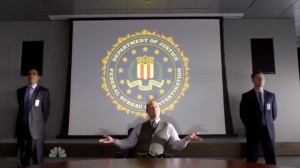 This week NBC premiered the new drama The Blacklist starring James Spader (You know the weird boss guy from The Office*) as Raymond ‘Red’ Reddington, a former FBI agent who goes missing on Christmas Eve leaving his wife and daughter and sells secrets to bad guys thus becoming a bad guy himself. Super dick move on his part, but he turns himself in 20 years later to help the FBI catch some of the baddest of the bad guys so he is OK by me. These guys are so bad the FBI doesn’t even know about them.

Now, overall this was a very solid premiere that keeps the old trope of bad guy and good guy working together alive though it does have a few missteps. The cop, Elizabeth Keen played by Megan Boone, is actually an FBI profiler who is sought by Red after his capture. Initially I thought “Yeah this is his daughter” but so far it doesn’t seem to be the case though her father has a sordid past. Anyways, I didn’t mind the very unlikely situation of FBI swarming the house with 5+ cars and a helicopter but what I did mind was the fact that this chick thought she was going to go in for a half day at work and then meet her husband for an adoption meeting. (You know because the family ties theme wasn’t punching you in the face already. ) Another thing that bothered me was her whiny ass husband who was shocked that his wife who was just essentially abducted by the FBI IN A FUCKING HELICOPTER couldn’t make their hearing. (They should be denied. They couldn’t even plan two separate life events without fucking it up, things aren’t looking good) Before I get to the awesome stuff my last annoyance that I can remember is why didn’t that Generals daughter kick and scream while being kidnapped? That’s like my first response to anything when I was a kid and definitely to being taken.

Alright now the fun stuff. While the acting is all solid from a cast of mostly unknowns (to me) Spader’s Red steals the show obviously and carries the scenes even if he doesn’t have to. I particularly liked the scene where he was overlooking the FBI’s intel and rearranging and chastising them for some of their prime suspects. This wit and sarcasm continues throughout the episode and will no doubt continue through the show as this man Red has a long arcing game plan with pieces seemingly in place well beyond any scope we can see. I also liked the scene where Keen stabbed Red in the neck when she wanted answers I felt it was nice they didn’t pussy foot around plus they showed that his coolest kid in the room act will only go so far.

The Blacklist has already set out a ton of mysteries for fans to try and unravel. Why does Red want Keen? Whats the deal with the husband? Red’s overall plan, Red’s Family? Keen’s Family? and probably more that I can’t think of right now but the story is ripe with directions to go and so far is heading on the right one. It seems to have a case of the week feel to it but it will clearly have season long story arcs. Also Red has escaped and shown dominance so many times that this show could be around for awhile since the obvious deadline of him being useless to the FBI will undoubtedly be brought up.

NBC has a bad habit of getting rid of their dramas early; Freaks and Geeks, Awake, Black Donnellys, Journeyman (wait am I the only one that watched that?!), etc… So there is no free lunch here. Here’s to the hopes it gets as many seasons as Las Vegas.