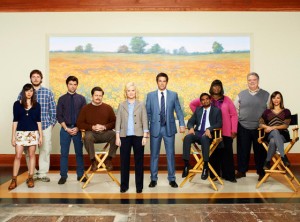 I’m sure there have been more criminally underrated shows than Parks & Recreation over the years, but I’m hard pressed to come up with many.  I suppose The Wire never got proper recognition when it was airing, but hyper-intelligent urban dramas on HBO can be a bit elusive, and it certainly has been lauded over the past few years.  I just can’t understand how a high profile network comedy that’s as intelligent and consistent as P&R can never receive the acclaim and audience that it deserves.  The Office was awful for at least three years before it was mercifully put down, and yet it still received the high praise and maintained the large audience that P&R has always struggled to obtain.  My guess is that it stems from a large, obtuse (how can you be so obtuse?) contingent that dismisses the show as a second-rate Office knock off that isn’t worth the time investment.  Dumb motherfuckers couldn’t be more wrong.

The season premiere picks up where we left off, with the Ron/Lucy Lawless pregnancy being discovered by Andy.  The speed of the wedding that followed was brilliant, with Ron and LL obviously wanting to get through it as fast as possible, going against every fiber of Leslie’s being.  While I’m deeply saddened that this might be the final season of this fine show, I’m extremely excited to see what Nick Offerman will move on to.  I’m a little worried that he’ll return to his theater roots and no one outside of the Chicago theater scene will ever hear from him again.  Ron’s final scene in this episode was particularly touching, and it will be interesting to see if the Ron/Leslie relationship is fleshed out over the course of the season.  Ron is obviously Leslie’s anchor, but I think Ron might start to notice that the vice-versa is true too.

The theme of the series has often been “opposites attract”, with the pairings of Leslie/Ben, Leslie/Ron, Ben/Andy, Chris/Ann continuing into this season.  Andy finding a British soul mate was fun, and has some potential over the next few episodes.  I hope it blows up violently over some trivial nonsense.  The joke about his weight loss was also pretty funny, given his upcoming starring role in Marvel’s Guardians of the Galaxy.

The biggest LOL moment of the episode for me was Jerry detailing for Chris and Ann the effects of the stages of pregnancy on a woman.  Jerry is normally the butt of extremely funny jokes, so to see him be the source of the comedy for once was great, I loved that shit.

The only real miss in this episode was pulling Tom completely out of the main action into his own separate storyline.  Henry Winkler’s role wasn’t particularly inspiring, Jean-Ralphio and Sister has become a pretty tired concept, and not having Tom play off the interaction with the other characters was disappointing, since that’s where he is best.  It was telling that the funniest Tom scene was with Chris and Ann at the Doctor’s office.  I hope this gets wrapped in with the main narrative, so Tom can get back to being funny within the group instead of struggling to carry his own storyline.

Looks to me like the season will lead Leslie to re-evaluate her place in Pawnee, and consider moving on.  My guess is that there will be an opportunity to take a high profile position elsewhere, which she will eventually turn down to stay in Pawnee.  This was a great start to what is potentially the final season, and certainly makes me sad to think about the possible end of a genuinely hilarious comedy, a true rarity in the post-Seinfeld TV landscape.