Man, what’s become of Van Alden?  This character started the series as a real force to be reckoned with, an unstoppable prohibition agent with righteousness on his side.  Now, he’s basically a joke.  A stoolie that’s pushed around by whatever mobster he happens to be hanging around at the time.  O’Banion’s a crazy dick that bullies his employees, and the crazy Capones recruit Van Alden, or George Mueller as he calls himself now, to accompany them on some collections.  Or should I say, crazy Capone?  I enjoyed the scene where Al almost lost it on some lady and his brother jumped in with some finesse knowing how hotheaded his brother is.  Basically the Capones now turned Van Alden against O’Banion when they all kill one of O’Banion’s guys.  I wonder when Van Alden, if ever, is going to re-assert himself as a strong character. Or if he’s going to remain a strong presence, weak of character. 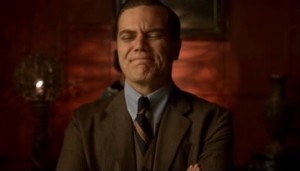 Eli’s son William is still up to some college nonsense.  He kicks it up a notch this time when he decides it’s time to prank his bully Bucky.  “Couldn’t happen to a sweller feller”.  William drugs Bucky’s booze and then makes sure the bathroom’s occupied.  Bucky proceeds to shit himself at the party, so I guess this makes them even?  Side personal note here – When I was in 7th grade I fancied myself a bit of a gansta.  I wore a gold chain and everything.  One day a kid got mad at me, probably for good reason.  I was kind of a dick.  Anyways, he grabbed my chain and yanked it off.  My gangsta style of revenge was to give him some ex-lax chocolates.  A “friend” of mine ratted me out and I got in BIG trouble.  They called the cops and I had to get lectured about how it could have killed him if he’d been allergic and yadda yadda yadda.  I thought it was so ridiculous.  Anyhow, point of the story, apparently the cops were totally right.  Because in Boardwalk Empire, Bucky shit himself to death.  He shit. himself. to. death.  Goddamnit William.

4th season in and Nucky’s right hand man Eddie has never been given much of a personality.  He’s always just sort of there, attending to Nucky’s every need.  Finally this is rectified as Eddie is given a mission to deliver $10,000 to a Capone at the train station.  He meets “Bottles” Capone, Al’s older brother.  The two hit it off pretty well and end up going to German bars and partying all night.  I quite liked seeing Eddie cut loose, and learn more about his background.  He’s one character that never fully felt fleshed out.  And as soon as I get that satisfaction, the bureau of investigation picks him up for an as yet unspecified reason.

Speaking of right hand men, Chalky’s seems intent on betraying him.  Dunn lies to Chalky about his mother being sick and goes to see Dr. Narcisse in Harlem.  At first Dr. Narcisse is non-responsive to Dunn’s approach, but reconsiders when Dunn persists.  The good doctor waxes philosophically on the state of the current position of black men in America and it’s apparent that this man is a pre-black panther black panther.  He does not want to play nice with the white man, and can use a man like Dunn to wreak havoc on white society and other black men who he feels shame the race.

The bureau of investigation itself, who we see through the ambitious eyes of Agent Knox, seems to be piecing together the concept of organized crime.  Mob bosses from different cities linking together to do deals.  Just as Nucky is trying to do with Arnold Rothstein in this episode.  Nucky’s trying to get Arnold in on the rum business he decided to start last week.  Arnold’s reluctant and it leads to the centerpiece of the episode: a poker game between them.  This was great because cards are Arnold’s thing.  He’s a gambler at heart, and I’d assumed that he would wipe the floor with Nucky.  Instead as we continue checking in on the game Nucky pulls further and further ahead until he’s simply tired of winning.  Arnold can’t handle loss very well and kind of loses his shit here.  Luckily he’s got Lucky Luciano’s partner Meyer Lansky behind him, telling him that  it might not be in his best interest to be a crazy motherfucker in public.  Arnold leaves the table and Meyer has a talk with Nucky.  Nucky informs Meyer that he can’t do business with a man so obsessed with winning, so Lansky goes behind Arnold’s back and secures the deal with Nucky himself, without Arnold’s backing.

Overall this was an extremely solid episode.  I missed Richard, as he’s become the most badass character since Jimmy got two in the head.  Also, still no Margaret, but she’s still in the credits.  At this rate, why doesn’t Michael Pitt still get billing?   But everything else in the episode was tight enough to hold my interest.   I give this episode four and a half stars out of five.