The show is Catfish: The TV Show.  “The TV Show” is right in the title, in case anybody was confused as to what they were watching.  AM I READING A BOOK?  OH NO, IT’S TV.  It’s got two guys, Nev and Max.  Nev is pronounced “Neev” and has a meticulously groomed 5 o’clock shadow, and Max looks like a 20 year old with the hair color of an 80 year old man.  Despite these initial turn-offs, they’re amiable enough fellows.  What they do is investigate people who are in online relationships and are skeptical about their partners for some reason or other.  Sometimes the other person uses fake pictures, sometimes fake names altogether and sometimes they’re not even the sex they said they were.  It’s got all the MTV reality show tropes that I hate, but the premise is juicy enough to tune in and see what the fuck people are falling in love with. 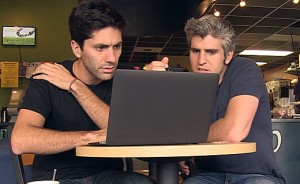 This episode focus’ on an 18 year old African American gal named Aaliyah.  Aaliyah is in an online lesbian relationship with a slightly older African American girl named Alicia.  They both live in Oakland and have maintained a relationship for over a year.  Nev and Max are like what the fuck, you both live in Oakland, why haven’t you met up.  Apparently Alicia always has some lame ass excuse, and she’s deep in the closet.  So Nev and Max head to Oakland.  We get a nice travel montage, our two heroic hosts have so much fun traveling.  Many cuts of smiling and goofiness that puts me at ease.  I can trust these guys.  Aaliyah’s homeless and moves around to different friends’ houses because her mom gave up their home to pay for Aaliyah’s education.  Touching story, but where’s the mom?  I’m assuming buried in a backyard somewhere.  That’s my go-to assumption.  Don’t agree with me, would you like to see my backyard?  I digress.  Despite Aaliyah’s economic situation she’s been sending Alicia money, and an IPhone.  Oh, shit!  But it’s true love because there’s messages they send each other of hearts and shit.  True love is textualized hearts.

Nev and Max investigate Alicia’s Facebook profile.  Everything appears legitimate, correct number of friends, photos that don’t show up on a reverse image search.  You guys wouldn’t believe how many people they catch using reverse image search.  ANYONE can do that shit.  If you’re curious enough to contact MTV, maybe try a google reverse image search.  They message several of Alicia’s friends and get a few calls from them.  It seems that she dated one girls’ brother.  Then another guy calls and says they dated for a short time.  If Alicia’s in the closet, she’s filled it with plenty of dicks.  Finally they talk to Alicia’s sister who informs them that Alicia is currently unemployed and dating a man.

“We seriously compute so well”

Commercial breaks.  Advertisements for a show called Big Tips Texas about hot girl bartenders.  Because we don’t have enough of those shows.  It looks like Coyote Ugly without a plot or John Goodman.  No thank you.  Also an ad for a Snooki and JWoww show, Snooki and JWoww.  Puke.

Max and Nev are constantly and unnecessarily holding video cameras of their own as they’re being filmed.  Did they forget there’s always a film crew around?  Anyways they contact Alicia who begrudgingly agrees to a meeting with Aaliyah.  The guys figure she’s just very far in the closet and is too reluctant to pursue her feelings.  Now Aaliyah and our fearless hosts are on their way to Alicia’s house.  We get a driving montage.  Lots of montages in this show, actually.  They use it to showcase the shitty music that’s playing.  It is technically still a show on Music Television.  They arrive at Alicia’s house and it’s in the neighborhood of the Biff’s alternative Hill Valley.  The houses are all barred up and it’s shady as fuck.  Alicia comes out.  I mean, out of the house.  Not out of the closet.  Alicia is extremely stand-offish and laughs off everything.  She laughs off their entire relationship while Aaliyah breaks into tears.  At this point I want to go full Chris Brown on this bitch.  She’s just the worst.  Aaliyah can’t handle it and leaves. Alicia tells Nev that she was never sincere about the relationship and it was only ever about getting stuff and because she was bored.  She’s even hoodwinked other people.  Nev needs to go Joey Greco from Cheaters on Alicia now. Joey Greco was a douche, but at least he was assertive enough to get motherfuckin’ stabbed.  Nev needs to but instead kind of mumbles some bullshit and leaves.  What a snatch.  Max tries and is slightly more successful and they agree to a second meet.

The second meet is pretty unproductive, Alicia informs Aaliyah that she isn’t a lesbian and that she’s sorry.  In a move that Nev calls generous, Aaliyah even lets Alicia keep the IPhone.  I call it a pussy move.  Aaliyah’s too much of a pussy to demand her shit back.  It ends with a clean split between the two, a little insincere talk of remaining friends.  My ass.  Flash forward one month aaaaand, nothing’s different.  Alicia says she’s done with scamming people on the internet.  I’m sure she would totally say that she’s still a con-artist on TV if she was.  Has to be 100% verified legit.  They give Aaliyah some words of encouragement and the show ends with the payoff of a snake or sparkler.  I watch this show guiltily to see fucked up shit, but this one was pretty straightforward and depressing.

Please make the next episode be an obese senior citizen posing as a teenage girl. 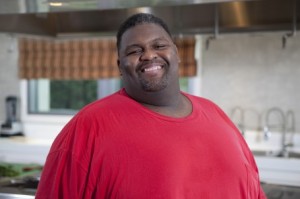