When we last left Tig, we assumed he would be killed.  Pope’s right hand man, August Marks had been gunning for Tig for a long time and finally Jax gave him up.  We left the episode with Marks and Pope’s crew surrounding Tig.  ….Apparently that was just another whoopity derpity “What’s Tig gonna get out of this week?!” deal.  Tig shows up at Jax’s house and tells him that Marks wants to meet with him. Tig also seems a bit suspicious that Pope’s men showed up instead of the prospects Jax said would.  Ya fuckin’ think, Tig?  So a man as powerful as Marks brings a gang to this place to arrange a meeting with Jax through Tig?  Pffft.  Cheap.  Marks tells Jax to get out of the gun business.  Jax is like, “Yeah bro, I’ve been trying”.

Wayne Unser is attacked brutally in his motor home, and left hanging in the clubhouse with a swastika carved into his chest.  The Nazis are avenging the guy that Clay killed in prison last week.  That’s the “Freak of the week” aspect of the episode as the Sons now have to deal with these Nazis.  They enlist the help of Skinner, AKA Darby an ex-nazi.  He’s iffy about it initially but helps SAMCRO reach the Nazi headquarters.  Tig and a prospect go in as father and son hoping to do some reconnaissance work, but it all goes to shit when another Nazi member picks up Darby and Juice on the road and brings them to the compound.  The Sons at the scene escape.  Eventually the club rides on the Nazis full force and blasts them like Bonnie and Clyde.

Wendy appears to be contacting Gemma behind Tara’s back about the kids.  As it turns out, Wendy is doing it all on behalf of Tara who’s hatching some kind of plan to take the kids away from the MC lifestyle.  Unser catches the two colluding, but covers in front of Gemma.

Nero is picked up by the cops due to Lee Toric’s anonymous call implicating him in the death of the prostitute that Lee killed.  Lee planted evidence all over the truck, and it’s quickly discovered by police.  Roosevelt however, doesn’t totally buy Nero as the murderer and starts investigating Lee Toric.  In the ride from the police station Nero tells Gemma he’s thinking of of cutting ties with SAMCRO.  It’s about goddamn time!  I’ve said since basically he STARTED ties with the MC that shit’s been going from bad to worse for Nero.  He might be mostly in it for Gemma at this point.

So Jax wants out of the gun business.  He meets with the Irish, and Jax tells Gaalan that he’s done.  For about the thousandth time this season.  Gaalan doesn’t take it well, but they seem to part amiably enough.  At least until Jax gets a call from Phil telling him that Gaalan’s delivering the guns to their warehouse.  When Jax arrives at the warehouse he instead finds Phil and another prospect’s mutilated bodies.  Phil is the big adorable furry guy.  Shit.  I didn’t want him to die at all!  Chibs is getting pretty tired of Jax making important decisions without bringing them before the table.  Jax is insistent that everything he does, he does for the club.  He’s the Walter White of SOA, and the Sons are his family.  Chibs remains unconvinced and tells Jax that his leadership is awfully reminiscent of Clays’.  It’s a good moment for Chibs, calling out Jax on his bullshit. 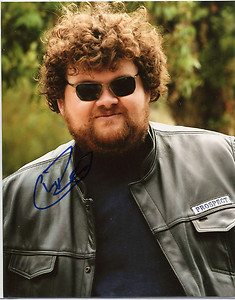 Meanwhile Lee Toric’s in a spot of trouble as the DA informs him that if he can’t get Clay to sign their affidavit, Lee’s off the case.  So Lee pays Clay a visit with some light threats.  “I’ve known guys like you my whole life”  Clay tells Lee.  “You don’t hate me because I’m bad, you hate me because I’m familiar”.  Lee figures his next best move is to show Clay what’s become of Otto.  Clay sees the mess that Otto has become and asks for a minute.  Clay uses this time to slip Otto a shiv.  “One more, brother” Clay whispers.  Finally Lee gives up on Clay when he realizes he’ll never budge.  So he goes to Otto and offers him comfort within the prison system.  He gives Otto a pen to write out something incriminating Clay, and Otto writes “YOUR SISTERS BLOOD TASTED ALMOST AS GOOD AS HER PUSSY”.  This gets Lee’s blood up and he attacks Otto, who shivs Toric in return.  Otto slits Lee’s throat open and gets shot to death.  At least Otto’s suffering is over, but like Lee said, “I didn’t even see that coming”.  I thought this whole season was leading up to a big showdown between Lee and Jax.  I suppose as unhinged as Lee was becoming, that wasn’t going to work out.  Now the Irish appear to be the main opposition as SAMCRO and the IRA are in a full out war.

So for this episode, I liked it.  A solid episode.  I didn’t buy Tig slipping out of danger again.  There was plenty of death, however.  And shocking deaths.  OH, and the T-1000 as the president of a different chapter of the Sons.  Robert Patrick’s always a welcome sight.  I give this episode a 4 and half stars out of 5.