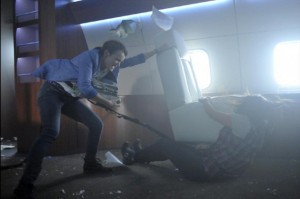 Teaser: explosion on the SHIELD plane and Coulson is about to get sucked out the side.

Flash back to about a day earlier. Half the members are questioning why Skye is on the team. Well she’s not, she’s a consultant “Just like Tony Stark”  We get more exposition about Coulson being “hurt” in the Battle of New York and how “magical” Tahiti is.

Apparently the super cargo plane, “The Bus” is something Coulson received after returning to duty. All this tech and they fly a cargo plane that has to have an airport or some long stretch of field near by to land  somewhere near by.  This week the team is in Peru to investigate an unknown device found in a pyramid. Coulson explains that they keep things quiet from the public. We get Skye’s major role. She’s pretty much Rat from “The Core” to make sure things don’t get exposed on the web.

The accents are atrocious with the tech geeks, so this means we are forced to listen to them for scientific explanations, however we get to see Phil handle a side arm with an old partner with some skill.  Grant then uses some type of shockwave stick which knocks people back but not out for them to make their escape.

The tech of the week seems to be Tesseract bomb. They then have to remind us directly which Marvel movie this is from (Captain America). How is it that no one was able to get any reading on this when they were looking for a similar device back in the Avengers film or anytime after?

The new members on their actual first official mission together squabble among themselves. Oh, we are so dysfunctional and different!  How will we ever become like the crew of the Serenity?

Coulson is mentioned to be having a mid-life crisis which he corrects to “afterlife”, surrounding himself with a young team and affection to the past. I’m thinking he may be a bit older than he appears. I’m going with infinity formula.

Wait, what? The random unauthorized military members that they saved and let on the plane are bad? The team gets captured?  Such refreshing new storytelling.

We then find out the device is a leftover from HYDRA and misplaced as the Third Reich fled to South America. Again, we knew of them since Howard Stark’s days but we didn’t check to make sure we got all this super weaponry out of the hands of bad guys?

Melinda May then shows why she’s named “The Cavalry”. The plucky team works together to try to get to Phil who’s tied up in another part of The Bus. They have to  trigger the device and blow a hole in the side of the plane since they had to change the pressure in the cabin to open the doors. Seriously, why are top secret super devices activated with such complicated switches?

We are now back to the beginning of the episode with Phil holding on for life. Only bad guys are sucked out the plane since saving people was already done in Iron Man 3.  Skye proves her worth by using an inflatable raft to plug the hole…In the side of the plane.  Whatever, it’s a Disney TV series.

They land and proceed to Operation Slingshot.  This operation is designed to banish things that are too powerful for one person or one government, to have control over, into the fucking sun. So it seems like no Warehouse 13 or Readers scenes. Seems like the episode is over with the team sharing some drinks. But wait, Skye replies to a text at the end of the episode…….”I’m in”  dum dum dummmmmmb.

This was was a solid enough episode. They were on the set most of the episode, so it made a way for the story to be told without various set changes. It very much felt like a Firefly episode where we learn about the characters, the ship itself, and progressed to the grander stories while setting up new mysteries.