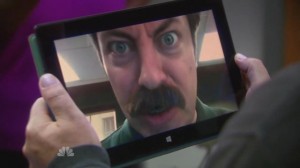 “The Pawnee-Eagleton Tip off Classic”

This episode felt like a small letdown after last week’s grand one hour premier.  There were some nice moments, but very few of the belly-laugh guffaws that I’ve grown accustomed to as a result of this show.  Sometimes the show falls into a strange comedic gray area because most of the cast is better suited to support comedy rather than be the main focus of it.  Amy Poehler is obviously the driving force, and side stories can suffer if she isn’t involved.

The main plot for this episode follows Leslie in her bid to improve her position in her recall election, at the expense of Pawnee’s rival town, nearby Eagleton.  it quickly becomes clear that Eagleton, a town full of snooty rich prick types led by the perpetually cute Kristen Bell, has spent itself into oblivion and is on the verge of bankruptcy.  Plus, they just switched to the Euro, and they paid for everyone living in the town to get HBO!  Eagletonians are pleasantly fucking insane assholes, I love them.  Leslie is poised to rip out Eagleton’s throat in an effort to bolster her support in Pawnee, but nice guy Ben isn’t comfortable with it.  Evil bloodthirsty Leslie is a bit of a one-note joke, and even becomes a little creepy toward the end of the episode.  However, the idea of all of the people from Eagleton being prissy Euro-trash assholes is pretty funny, given the rural, central Indiana location and the fact that Eagleton seceded from Pawnee over 200 years ago.  It’s a running gag, but it works, especially when the residents use insults that only make sense to super-wealthy people, then laugh at their own jokes.  They paid Chris Bosh to play for their high school basketball team.  I love this town.

There are two secondary stories, one pretty funny and pretty damn boring.  The first revolves around Ron’s constant struggles to remain anonymous and retain his right to privacy, going to ridiculous lengths to eliminate all physical and digital evidence of his existence.  He enlists the aid of Tom (thankfully brought back in with the main cast, with curiously no mention of Fonzy, Jean-Ralphio, Rent-a-Swag, Mona Lisa, nothing) and Retta, who are of course completely linked in to an insane amount of social networking and digital media.  The scene where Ron is trying to erase pictures of himself from a tablet but mistakenly sends out a Vine of himself yelling into the tablet, which is then tweeted and re-Vined by Tom and Retta had my shit rolling.  Certainly the best moment of the episode.  The hijinks is predictably brought to a close by ball and chain Lucy Lawless bringing Ron back to civilization.  Lucy is pretty much wasted if she’s only going to nag Ron.  Bitch knew what she was getting into, so leave my man alone!

April and Ann Perkins are driving to Bloomington for April’s veterinarian school orientation.  Other than the scene where April has only agreed to continue to attend the orientation if Ann agrees to pose as her grandmother and take all of the humiliation that comes with it, it’s largely boring.  Obviously this is necessary because Ann marks Bloomington as a potential future destination for her and Chris, since Bloomington is the most modern of cities compared to Pawnee.

The episode had its share of moments, but had more misses than hits. No Andy Dwyer is always disappointing, I expect him back full force next week, and assume he must have been filming on location somewhere as STARLORD.   I want more OH FUCK I CAN’T STOP LAUGHING moments.  Leslie and Ben’s solution to envelope Eagleton back into Pawnee in order to help solve their debt crisis has potential down the road, if it involves Eagletonians and Pawneeans trying to live together.  Overall, too many separate storylines to make a good episode, hopefully next week everyone can get roped into the same story and we can go back to having a raucous good time.