On the first day God said, “Let there be Mac”.   We start this episode learning that it is “Mac Day”.  Apparently each member of the gang gets their own day wherein all the others have to do what they say without complaint.  So obviously everybody goes sleeveless in this episode.  Mac decides to model his day after the 7 days it took God to create the earth, picking and choosing which days are more “badass” than others.  He begins by lecturing the gang for 7 hours, 5 of which were about the evils of homosexuality.  Apparently the whole time he was talking about the gays, he was sporting an erection.

Mac’s cousin, “Country Mac”, comes to visit.  Seann William Scott plays Country Mac, a Harley riding, laid back, effortlessly badass who has an omnipresent can of beer in his hand.  Mac revitalized Project Badass for his day and was consistently out-badassed by Country Mac.  When it came to jumping off a bridge, Mac wanted to add the actual jump via some kind of digital post-effects.  Country Mac jumped.  When the gang sign up Mac for a karate tournament, Mac scores one blocking point and Country Mac starts a riot.   Mac takes them to a planetarium, and Country Mac gets them stoned.  Dennis’ stoned conversation with the gang was great.  “You know what I really hate?  It’s Mac”, as Frank kept agreeing.  Everytime Country Mac would do something actual badass Mac would counter, “That’s not badass, it’s just dangerous”. 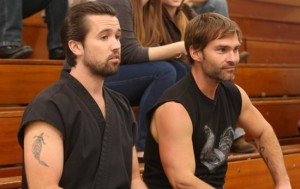 Mac takes the gang to oil up a bunch of bodybuilders.  “If you guys don’t start greasing up some dudes, I’m gonna freak out!”.  The gang decides that Mac is a closet homosexual.  As it turns out, Country Mac is an out and proud homosexual.  It’s as if Country Mac is very much like Mac, he just does it in a way that grates everybody’s nerves much less.  Mac brags about his “ocular patdowns”, but Country Mac actually follows through and disarms someone carrying a knife.  It all culminates in the gang deciding it’d be best if they switched Macs.  Country Mac agrees, and almost immediately keels over dead.  Mac delivers the eulogy at the bar, mostly putting Country Mac down for being dangerous and homosexual.  It ends with Frank day, and he starts the day by crudely dumping Country Mac’s ashes in the toilet.
This was a decent episode, mostly saved from mediocrity by Seann William Scott and his immaculate comedic timing.  I give the episode a 3 and half stars out of five.