Previously on Survivor: Despite looking the part and acting the part of a filthy pirate, as if he lives out on these islands just waiting for Probst to show up every now and again, poor Rupert’s torch was snuffed for a fourth time.  Rupert is not so good at this game.  When given the chance to trade places and go to Redemption Island in place of his wife, he took the offer without hesitation, interrupting Probst’s explanation of what that meant with “AGAIN AND AGAIN AND AGAIN!”.  Rupert had one in him and looked like a buffoon attempting it. The noob tribe voted out Rachel in the hopes that Tyson would pull a Rupert and replace her at RI, thus weakening the veteran tribe.

We begin the episode at RI where Tyson sees that Rachel has been voted out and is a bright fellow and realizes their plan was to get him to swap places with her.  To his chivalrous credit, he puts the ball in her court and she declines knowing full well that Tyson has a better shot at winning this game than she does.  Tyson then gives his best ” I’m gonna kick the shit outta all you assholes” speech to the other tribe.  He was standing and everything!

With his drama senses now tingling, Colton motherfucking Cumbie begins to openly weep. “I Can’t do this anymore!” Probst scoffs at this bullshit and just lays the fuck into him and it is glorious.  Asking him if he’s quitting, Colton responds yes and Probst reveals(at least I didn’t know) that this wouldn’t be the first time he’s quit as in his previous season, he’d faked appendicitis and was med evac’d.  And he was in total control of his season, miraculously!  What a piece of shit.  God, I hate this guy.  I would bet 1 billion dollars that if he was cast on this season’s Big Brother, you wouldn’t have heard a peep about the other houseguests because this asshole would fill up one day with his racist, hateful comments, let alone a whole summer. Colton probably owes the CBS crew a beer for how GOOD his edit was. Why didn’t they vote his ass out that first day?  Why did they invite him back? 1. Shit exactly like this 2. He wanted to clear his name(hahaha) 3. I hear Rob Cesternino and Wife pulled out at the last second because she got pregnant…so I guess he didn’t pull out, heyyyyyo. 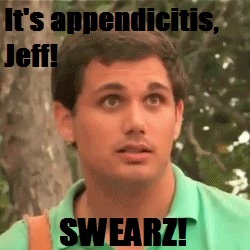 But the best part of all of it was Probst’s absolute shaming of the guy, the kind he only reserves for the ones he truly can’t stand.  From the oh so you’re quitting again, because you faked illness the first time, yeah.  To the you wanted your shot at proving you were a good guy, you got it and you’re still a fuckin asshole. to the go ahead and keep your buff as only “competitors” get to throw it in the fire.  So great.  Don’t let the door hit you, Colton.  The silver lining of this is that arguably the nicest guy in the game, Caleb, his fiancee(how did THAT happen) gets to stay there and play.  So, Jesus, where was I?  Onto the battle between Candice, Marissa and Rachel.  Candice beasts it again at RI and gives husband John a second clue to the hidden idol, leaving Marissa and Rachel to race through some domino stacking tripwire contraption thing. Ultimately, Rachel is sent packing but not before embracing Tyson.  wasn’t he gay before?  I seriously remember him being gay. 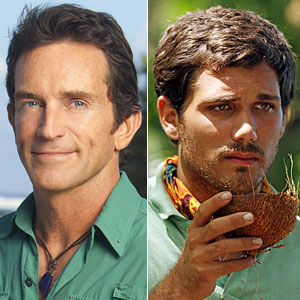 “The tribe has fucking spoken, you shitbag.”

The most compelling pair of the season to me is that of Aras and Vytas.  Aras, the superstar former college athlete, former Survivor winner, all around great guy and Vytas, his brother, former junkie and outcast of the family.  Without going into detail, let’s just say I feel Vytas’ pain.  When Vytas talks about how he’d love to take down his brother in a physical challenge, you know shit is about to go down.  We arrive at the immunity challenge where there is a floating platform in the water and the tribes will compete one on one in sumo style beat each other off the platform challenge. Aside from both young ladies embarrassingly both losing to their grandmother aged mothers, the main event is Vytas-Aras for me.

Probst talked to them before their epic duel and Aras said he felt like he was seven years old again about to take on his bully and Vytas remained stoic, prepared to take down his superstar brother.  And the battle begins!  And an epic one it was, no one giving up an inch.  Eventually, Vytas grounded himself on all fours.  Exhausted, Aras was unable to move him, so Aras did the noble thing and took a step back and allowed his brother to regain his footing.  With immunity on the line, Vytas jumped up with a cheap shot on his brother, who shrugged it off and still vanquished him.  Probst asked a visibly emotional Aras what that was like and he replied through tears that he hated fighting his brother then and he hates fighting him now.  Vytas’ response to the same question “I gave him a cheap shot and he still beat me.  He’s the better man” I have a sad face right now.  Vets win again.

So the scrambling begins at tribe ‘we don’t know what the fuck we’re doing’. as Brad Culpepper has become this season’s Amanda Zuckerman(For my Big Brother peeps out there) making irrational decisions one after the other and he’s loud and brash so everyone follows his lead….because it’s too early to take him out you see.  He’s a threat and they need to stay forever in these games.  Uggh. See if you can follow his logic.  John needs to go tonight because when, not if, but when Candice comes back in the game they’ll be unstoppable.  Candice is ALREADY at Redemption Island.  She will have to beast mode the fuck out of it to even make it back in.  She might, but the odds are stacked highly against her.  So John already has one of his legs chopped off, so let’s take him out?  What about when Brad and Monica reconnect at the merge?  He’s a former NFL player.  A real winner having played for those unstoppable Buccaneer teams of the 90s.  Neither of them are at Redemption yet.  How is he not a threat?  Or take Hayden and Kat.  He’s won Big Brother which is a hell of a lot harder to win than Survivor, mentally, plus he’s one of the most fit guys on the island.  No threat there?  Culpepper is a total Zuckerman short term player weakening his own alliance and by proxy, his tribe, out of paranoia and jealousy. 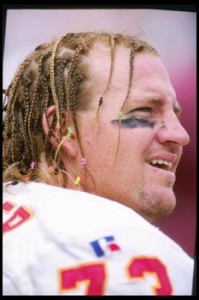 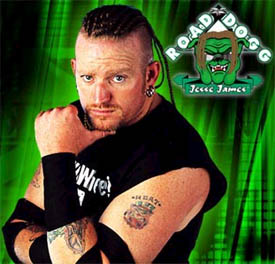 So we get to tribal and John is blindsided, weakening the shit out of their tribe even more.  He gets to RI and Candice is understandably upset to see him.  He’s like, Hey we get to be together again and she’s like, you moron.

Quote of the episode: Marissa: “Fuck you, Brad Culpepper”  Fuckin A, Marissa.  Fuckin A.

DVR Demon. I watched this shit.  Now you don’t have to.