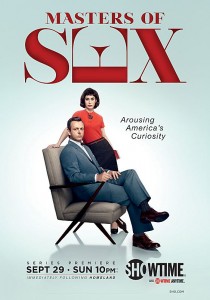 This past weekend, the scientific sexual revolution themed Masters of Sex debuted as Showtime’s next dip into the HBO-dominated premium cable arthouse ocean.  The show, based in the notoriously repressive 1950s (as much as the American 50s are regaled by so many as an idyllic utopia, there are dozens, if not hundreds of movies and TV shows that point out how prudish and racist and sexist and homophobic everyone was (maybe that says something about those who worship the 50s…) that features Lizzy Caplan as a recently divorced secretary with upward (and horizontal) ambitions and Michael Sheen as a prominent MD desperate to study sex while experiencing little joy in participating in it and demonstrating little understanding of any female motivations, pleasures, basically anything whatsoever.  The show is amusing enough, but needs a few nudges in the right direction.

About ten minutes into the pilot, anyone who has seen an episode of Mad Men will begin to make inevitable comparisons.  I won’t write off Masters of Sex after one episode, but the creators have to figure out a way to distance themselves from Mad Men pretty quickly, because they’re losing that battle.  Obviously the subject matter will be a little different, but there is enough of an overlap to the time period and the content that an unavoidable “Mad Men does this waaaaaay better” reaction is going to pop up.  There’s room in some genres for multiple shows airing alongside one another, but a relatively hypersexualized section of 1950s Americana isn’t one of them.

Masters of Sex probably could hope to achieve the distinction through character development, particularly with the strength of its leads.  Mad Men has always been more of a true ensemble rather that just the “story of Don Draper”, which has been largely successful.  Caplan and Sheen both bring immediate gravitas to their roles, and both characters have achieved admirable depth by the end of the first hour.  Most shows struggle with that accomplishment over the course of an entire series.  The secondary cast could use a little fleshing out, especially Nicholas D’Agosto as the aggressive, young up-and-coming (cumming?) doctor.  But I feel like I already know Masters’ wife, played by Caitlin Fitzgerald.  Beau Bridges is completed wasted in a guest spot as an angry administrator completely opposed to all things penis and vagina.  Why not just have John Lithgow reprise his Footloose role?  The roles of the two initial test subjects, who are rather nondescript and are introduced late enough  in the episode that I didn’t catch either of their names, are written and acted well enough that there is quite a bit of potential for both of them if the characters stick around.  Sexual nervousness can be difficult to project onscreen, and their scene together is entirely believable.

Most of the pilot is run-of-the-mill, oh-my-god-talking-about-sex-in-the-50s, with the added bonus of plenty of gratuitous Showtime tits.  The cliffhanger ending, however, is probably jarring enough to carry over through the rest of the first season.  While not wholly unexpected, the manner with which Masters delivers his, well what does one call it?  Penis proposal?  Orgasm offer?  Basically Masters informs Virginia (Lizzy) that he believes that if they are to conduct proper sexual research, then they should be participating in the research, together.  The most scientifically proper booty call ever.  It really is a scene that catches the viewer off guard, and given that Masters knows that Virginia is fucking another doctor who beat her ass, and Virginia knows that Masters’ wife is participating in the study, it’s doubly shocking.  The scene alone lifted the episode from average to good, and definitely is enough to pique my interest in what happens next.  I’ll be looking forward to the next episode, and probably the rest of the season.