I was pretty excited for this one.  I just recently watched all of the first season on Netflix and loved it.  I was hoping that they would release the second season a bit before the 3rd season started to air, but no such luck.  Now if they release the second season on Netflix, I think I’ll wait until the third is over.  What with so many people who play different characters, I’d probably get confused.  I get confused pretty easily.

The most interesting aspect of this premiere, to me, was Kathy Bates’ turn as Madame Lalaurie, a woman who lived in reality back in the 1800’s.  In this she’s seen applying blood to her face in order to stay younger, and torturing slaves.  She keeps a torture chamber in her attic where we see all kinds of fucked up torture that’s been inflicted on the poor slaves.  The whole story of Madame Lalaurie and her slave torture is frighteningly true, and I appreciate a little bit of history in my fantasy horror shows.  I mean, of course there are some artistic liberties.  In the show the Madame is poisoned and buried, and dug up some 150 years later.  As far as I know, that didn’t happen in real life.  Scarily, in real life, she fled the country and nobody knows exactly what happened to her.  Who knows what kind of messed up stuff she was off doing?  Also, probably most horrifically, when the police discovered the tortured slaves, they took the ones that were still alive and kept them in jail so people could pay to look at them.  Jesus Christ, olden times were terrible. 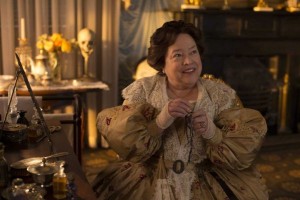 The bulk of the show is seen through the eyes of Zoe, a young woman who didn’t know she was a witch until she discovered her awful “power”.  When she loses her virginity, her boyfriend dies a terrible death.  Now, I know I’ve seen this said elsewhere, but this story line is almost exactly like that of Rogue’s in the first X-Men movie.  Accidentally kills her boyfriend, has to join a special academy for people like her who are persecuted by an ignorant and intolerant society.  There’s only three other students, a movie starlet who can do crazy shit with her mind, a down’s syndrome-ish girl who can read minds, and a gigantic black girl who is a “human voodoo doll”.  By that I mean she can do anything to her body and not feel a thing, inflicting whatever she would be feeling on somebody else.  There’s a neat dinner scene where the 3 other girls get into a small spat and I can’t help but feel like Zoe is completely outmatched at this point.  The other girls can do all this impressive shit, and she’s pretty helpless.  I mean, if she scissors with one of them, will that cause death?  Would she or one of the other girls have to use a strap-on?  First she’d have to convince one to do it with her.  Hopeless.

Zoe and the movie star girl go to a frat party where the starlet gets roofied and raped.  Some dude crushing on Zoe breaks it up and they run back to the bus, but the movie star gal flips the bus, killing most of the boys.  Zoe goes to the hospital hoping to see the kid that was hitting on her, but finds that the one that was left alive was the jerk who roofied her friend.  We see a look of vengeance in her eye, and it’s like, “Oh fuck yes, this kid deserves whatever’s coming his way!”.  But instead he’s sentenced to…..death by snoo snoo.  Seriously, not even a bad way to go.  I hope Zoe finds some hidden powers, because seeing her jerk off the comatose bro to get him hard before she started banging him was kind of…..degrading really.

In other happenings Jessica Lange plays Fiona, a witch who can do basically everything.  She’s known as the “Supreme”, of whom only appear once in a generation. She takes over teaching duties at the school and she’s on a desperate quest to restore herself to youth, much like we saw Kathy Bates’ Madame Lalaurie doing earlier.  The two connect at the end as Fiona has Lalaurie dug up for purposes yet unknown.  Other small hints include some vague mentions of a “council” of witches.  I’m sure that will come into play.  All in all this was a great premiere.  Thrusted me right into a rich world, that I’m very excited to see become darker and darker, if the first season(and probably the second) is any indicator.