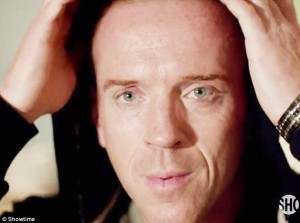 We all knew that Brody was going to return, it was just a question of when and in what capacity.  I’d find it difficult to believe that anyone in the viewing audience predicted “gutshot outside Caracas with a shaved head, being transported to a desolate, graffiti-covered rooftop villa with no walls, encouraged to embrace heroin addiction”.  Alright by me, I’m okay with anything they do with Brody, as long as it isn’t more of the same.  It’s reasonably obvious that’s he’s destined to die this season, and not too much of a stretch to assume that it will be in some quasi-redeeming fashion.

The parallels drawn between Brody’s third or fourth rock bottom and Carrie’s fifth or sixth rock bottom are glaringly evident and persist throughout the episode.  The obviousness threatens to detract from the effectiveness, but it basically works until the very end, which pits Brody being dumped into a dungeon strikingly similar to the one he was pulled from in Iraq against Carrie being confined and desperate in her institution.  It was a little over the top with the visual storytelling, but I’m hopeful that this will continue to play out next week, with both characters finally beginning to bounce back.  I’ve seen enough of Crazy Carrie, so much so that I’m beginning to forget the allure of accomplished, professional spook Carrie.  It’s time for her to be right about something, which we haven’t seen since she brought down Abu Nazir.  It’s nice to explore the depths of mental illness, but pounding the viewer over the head with it for weeks on end smacks of redundancy.  If this was Awakenings or Patch Adams I’d get it, but it’s motherfucking Homeland and shit.  Give Carrie a way out already.

I did appreciate the relief that we got from the Brody’s family storyline.  The worst mistake the writers could have made with this episode would have been tying Brody back to Jessica and Dana.  It seems like he has cast off the old life completely, and it’s about damn time.  What still doesn’t make sense is the creative devotion given to Dana’s craziness and Jessica’s Jessica-ness in the first two episodes of the season.  They’re definitely coming back at some point, likely to the detriment of the show.  I’m invested in these characters, so much so that if they keep asking me to invest more, I’m going to start actively rooting for them to die.

Given the episode’s direct focus on Carrie and Brody, it’s understandable that there was no Saul or Quinn, but I’d like a similar episode dedicated solely to them two weeks from now.  With Brody very likely dying in the last or next to last installment this season, the show is going to need a direction for the future.  Quinn as a rouge agent, working for F. Murray “Salieri Suarez” Abraham, pursued by a re-teamed Carrie and Saul would have some serious potential, especially if Quinn was directly or indirectly responsible for Brody’s death.  Or maybe Saul’s wife is a mole, and working with Quinn!  What happened to Virgil and Max?!?!?  Let’s do this shit!

Wrapping this week up, it’s always nice to see alumni from The Wire pop up unexpectedly.  D’Angelo Barksdale was living in Woodbury on the Walking Dead, and we didn’t even know it!  I recognized Brody’s squatter penthouse doctor immediately, but it took me a second to figure out that he was Jimmy McNaulty’s mortician buddy.  The dude plays a major part in this episode, and the cavalier way he discusses Brody’s relationship with death is fantastically intense and this week’s high point.  It’s that comment that finally drives Nicky to take to the needle full time, and sink even lower than he already was (who knew that was even possible, although how hard can be to quit heroin?  Jack Bauer kicked it cold turkey in season 3 of 24 in like four or five hours!).  I’ve seen the needle and the damage done, and junky brody has a shelf life of MAYBE one episode, then we need an intervention.  Saul, Quinn, Chris Brody, lunkhead Mike, and dead Tom Walker sitting around Brody, begging him to stop with the H.  Appointment Fucking Television.

I’m reinvigorated with support for Homeland after this week, but I remember what they’ve been giving me prior to this.  I’m warning them, if we’re back to The Brody Bunch next week, I’m fucking laying into this shit.