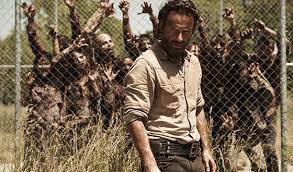 Okay Okay! This is what wets my whistle (insert whatever you would like to think my whistle is)! In addition to American Horror Story this show is pretty much what I look forward to. Yes look forward to, the busy mom of two who feels like an indentured servant at times is easily pleased with TV. I have to say I am obsessed with zombies, before zombies were the cool thing. I read Stephen King’s “The Stand” back in middle school (great job mom and dad) and although not a zombie novel it is an apocalyptic type story that changed my life forever, yes truly. One of my favorite parts of the novel was when survivors could “pick” their houses. yes yes the world had ended but I was mesmerized at the chance to start over even in middle school (Thats why I loved the idea of LOST too). But this ties into The Walking Dead. Characters like Daryl get to be completely different in this new walker world.

I’m a huge fan of this show, and just like a TRUE football fan;  I’m a true Walking Dead fan. I don’t get all pissy and moany when the show seems to be “slower” as I know the set ups of these episodes is just as important as the episode itself. yes there are parts I don’t love, but I love The Walking Dead in its entirety.

We pick up at camp Cell Block Six (which seriously get the fuck out there gang, its horrible), but the survivors have seem to make it “home” to them. You can tell some time has passed since the Governor’s Full Metal Jacket moment on last season. It’s hinted to then in your face when you see Carl rapidly growing and becoming an awkward Peter Brady teen before our very eyes. We see our group from last season little by little: Rick and Hershel becoming Mr and Mr Green thumb planting what seems to be a sustainable garden (which is an excellent idea because you can’t grow cheeseburgers). We see Daryl and Carol which WTF with their hair? Does Carol have some good cutting shears? Her hair doesn’t grow? And Daryl is waaaaaay to Rocker chic with his perfect “messy” hair. He immediately grosses me out as he licks all five of his dirt covered fingers and shakes a boy’s hand (whom is a new character). The boy is obviously smitten with Daryl because he doesn’t back up as I would and gladly shakes it. Tyrese and his sister who is  poor man’s Angela Bassett, Beth , Maggie, Glenn, and some survivors from Woodbury. And the baddest of the all: Michonne!!!!

Rick seems to not being seeing skinny ass Lori talking to him anymore, which is a good thing. By the way I am the world biggest dumb ass and I decided to paint my toe nails during this episode. Needless to say it looks like my girl Helen Keller painted my nails.

Anyway……Shit goes down soon as a small group of the prison campers decide to go to BIG LOTS! Ha, it’s actually Big SPOT but its def supposed to be Big Lots. Which how amaze balls would that be? I could pick up a fuzzy penguin throw, some imported canned beets, your pick of Latin delicacies and a Ninja blender. The choices are limitless. I’d be living there and not at the prison. But apparently thew crew didn’t check out the roof because a Helicopter at some point has crashed. (By the way spoiler alert, but ya know what? People who come to TV sites hoping not to be spoiled seem silly to me). The Roof of Big Lots is obviously not strong enough to hold a helicopter. I have no way of knowing how long its been up there but it comes with at least 15-20 decomposing walkers.

A guy whom we don’t know yet is jonesin’ for some booze pretty hard. he is eyeing up the wine and ends up making a big turbulent racket. This draws the walkers from the roof to the noise ( i think some viewers seem confused about this). They hear the noise and go towards it like Carol Anne does the light. The noise is centered where the Helicopter crashed and has compromised the roof. There are weak parts of the roof and the walkers start pouring in like seagull shit on a beach with some dumb ass fat kid throwing his McNuggets at them.

This of course causes pandemonium and the loss of life (but we don’t know this person yet so its cool). Meanwhile there is an episode long scene Rick has with a mousy zombie looking human lady he finds in the woods, that does bore and confuse me. Its pointing out several things. One of them being Rick was ..<— that close to being as crazy as this chic is. She keeps mumbling “you can’t come back from the things I’ve done” or something like it. Here’s the deal she doesn’t know, you have to have done something terrible to still be alive. This is zombie/infected/virus/Apocalypse 101. You have to kill, hide, steal, lie, and worse to keep on keeping on; and that’s okay. You don’t need to beat yourself up for surviving.

There is an underlying illness going on in this episode that I haven’t wrapped my medical detective head around but I’ll give them leeway. Sick and dying pig at the beginning. Daryl licks his butthole fingers and shakes the kids hand. Now the Kid at the end of the episode is barfing and sputtering n the water supply and DIES. The kid we never got to know DIES! We see the last few seconds his eyes coming back as a walker. So this is for sure setting up for the next episode which I have a hunch will be full of way more action. I don’t see nearly enough of Michonne. Glenn and Maggie were only in their jail love nest momentarily (with a baby scare I might add) and speaking of babies… baby Judith was only in a blip too. I need to see more of the trails and tribulations of that baby. I need to see what they are doing with her diapers?! What the kid is eating. Does she have colicky crying fits in the middle of the night? I need to know this shit.

All in all a solid season opener with the foreshadowing of serious walker shit to come, oh and don’t forget my Liam Neeson look alike Governor is still on the lose (and with the Government Shutdown who knows what he’ll do!)