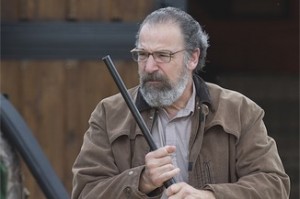 I’m not going to let Homeland off the hook completely.  There’s still plenty to be pissed about, and the show is nowhere near what it was at the end of the first season, or in the middle of the second season.  But they hit the Season 3 reset button at the last available second where something decent might actually still be salvageable.  One request!  No more shots of Carrie staring at herself in the mirror, Showtime!  You’ve done it at least a dozen times now.  Your obsession is getting weird.

Something finally happened with Carrie!  Yes, she’s off her meds again, yes, somehow she hasn’t been picked up for questioning regarding her involvement in the CIA Headquarters bombing, but she’s out of the institution, and something actually happened to her!  She got black bagged (which I suggested should happen, when?  In episode 2?  Yes, I believe so) after being strip searched, and was taken to a rendezvous with who I presume is the Magician.  Could the head of Iranian intelligence simply drive into the US across the Canadian border?  I guess so.  But now he’s here, and he’s a grinder eating, wisecracking, son of a bitch.

The show should tread lightly with its portrayal of Persian/Muslim villains.  The risk of offending the Muslim American community put completely aside, modern television and film is full of A) The faceless, personality-less evil Arab hellbent on bringing down the Great Satan (Abu Nazir fits this to some degree) and B) The devout Muslim who secretly covets the American lifestyle and lets his jealousy feed his violence.  We’ve already been presented with the Magician obviously enjoying the hell out of some decidedly American cuisine, he’s cruising around in a western car, and he’s making jokes about Carrie’s physical fitness and yoga participation.  This dude needs fleshed out a bit, or else I have no understanding why, in a world full of hundreds of millions of people, he’s the one who saw fit to load up Nick Brody’s SUV with a hundred pounds of C4 and turn the CIA into a crater.  I’m happy with the character so far, but now I need some backstory, and what we’ve been provided with so far has been pretty thin.  At least with Nazir we got to see the murder of his son, something that not only ignited him but fueled Brody’s turn as well.

This episode also saw the complete bottoming out of Saul, something that was pretty unexpected.  We’ve been set up to believe that Saul was ascending to the top of the CIA, and that he’d reconciled with his wife, but both of those Persian rugs were swept out from under him in a matter of ten minutes or so.  First, he’s blindsided when he finds out that some non-spy bureaucrat is going to take over the agency, and Saul’s reaction is very and appropriately Carrie-esque.  Having him respond to a situation the exact way that we would expect Carrie to was a nice touch, even if his swan song of a soliloquy to the new director was given in a decidedly calmer manner than what we’ve seen from un-iodine’d Carrie.  It was also quite telling that Saul, confronted with his wife obviously cheating on him, goes upstairs, sulks, then starts working the op with Quinn.  So now, all three of the main characters have reached their bottom, and Homeland would do well to understand that the audience could use a turn or two of some well-earned redemption.  And that Saul is one duckhunting ass motherfucker.

We get the return of actual likable characters.  Virgil, Max, and Quinn are back to support the main Carrie plot, and it’s a welcome return, as Virgil and Max bring the geniality that is countered by Quinn’s stoicism and grit.  Quinn’s character still has more plot device to it than depth, so I would really like to see him revealed as a double or triple agent this season to shake things up, even if it doesn’t make any sense.  When his connection to F. Murray was teased last season it was intriguing, and it’s gone exactly nowhere, a giant red flag that the writing team doesn’t really know what it’s doing with him.

We can all rejoice that the Dana/Leo/Jessica Triangle of Bore has come to a close.  What was the purpose?  Nothing happened!  They wasted hours of screentime having Dana run away, having Jessica worry, having Mike do nothing, and having Leo serve no purpose.  I actually can’t believe that Showtime execs let this garbage air.  And to cap it all off, Jessica goes to Carrie for help?  The crazy CIA operative that her traitor terrorist fugitive husband was fucking?!?!?  Come the fuck on!!! No fucking way!!!  And not only that, but Carrie jeopardized an active operation working to catch the motherfucker that blew up the CIA, that could get her killed, to help Jessica SmallTits Brody?  At least it’s finally over.  Please God let it be over.

The show has a direction.  It’s all that we can ask for at this point.  There’s an op being run, and only Saul and Quinn know about it, but how is Saul going to keep everything in play when he’s presumably out at the CIA?  It’s a fun set up, for the first time this season outside of Brody’s penthouse villa of doom.  I’m betting we get some Brody action in the next week or two, and not the disgusting Jessica/Dana kind.  No, we want some head shaved, lily-white heroin-shooting ginger-ass Brody, and we want it SOON.  Make that shit happen, Showtime.