“I can’t be in love if it’s plastic
To live on my own just seems tragic
But we’ll raise our swords high when our day comes
You thought it was gold, but it was bronze”

This summer, my wife got addicted to British television.  One show that she began to watch, which I decided to join in on, was “The IT Crowd”.  We had heard good things about it and we liked Chris O’Dowd in “Bridesmaids” and “Family Tree” so we gave it a shot.  We were completely unprepared for how much we would end up loving this series.  One of the funniest characters on this sitcom was the office boss.  The boss in the first two seasons was Denholm Reynholm (a great name in and of itself), played by Christopher Morris.  After Denholm’s hilarious and unexpected exit from the show, he was replaced by his son, Douglas Reynholm (the inimitable Matt Berry).

After completing the whole series, I immediately became obsessed with Matt Berry, who reminded me of a British Jack Black.  I remembered that he had a small role as a kid’s musician on Portlandia.  I went to Netflix to see what else was available featuring Matt Berry.  This is what I found: 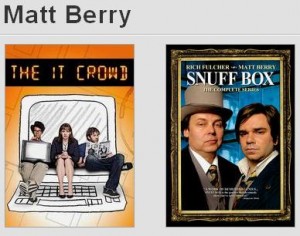 Snuff Box?  I had never heard of this show and the picture didn’t exactly look enticing.  I had seen Rich Fulcher a few times in the past couple of years…he had a hilarious story on Funny or Die’s “Drunk History” about Abraham Lincoln.  He also played some odd characters on “NTSF:SD:SUV” and “Jon Benjamin Has A Van”, odd to the point that he made me a little uncomfortable.  But Matt Berry was so awesome that I figured I’d give Snuff Box a shot.  Boy am I glad that I did.

As a huge fan of cult comedy and sketch comedy, I was immediately impressed by the first episode of Snuff Box.  The premise is quickly set up with the opening scene: Matt and Rich play characters with their real names.  Matt is a professional hangman and Rich is his assistant (why an American is working with a British hangman is never explained but you really shouldn’t care).  The show weaves skits between their interactions and various random segues.  Snuff Box reminded me of another cult sketch show, Mr. Show (one of my favorite shows of all time), in the way that sketches would roll one into the other (though Mr. Show was much smoother in the transitions).

I also loved that there are jokes during the episode that are referenced later (sometimes in a future episode).  There is a random skit segue where Rich Fulcher is a “rapper with a baby” and sings a cheesy rap song, only to have it offhandedly referenced later in the show as its video is playing on a television and Matt Berry asks “How did this shit get to #1?”  It is best to see all six episodes in a row to get the full experience, but each episode can be individually viewed.  There are certain sketches that are repeated in different episodes, such as the hilarious “Boyfriends” sketches:

The humor is about as dark as it can get, with literal gallows humor throughout.  This show also featured the interesting dichotomy of a British and American comedy partnership.  Off the top of my head I am unable to think of another show that was 50% British and 50% American like Snuff Box (they even display the 50%/50% by the superimposing of Berry and Fulcher’s faces on the American and British flags in the opening credits).  The show itself is British but the presence of Rich Fulcher creates a schism between the politeness of British comedy and perceived ultra-vulgarity of modern American comedy.  Fulcher portrays himself as a vulgar lout who has always “gotta piss” and seems unable to complete a sentence without at least two “fucks”.  Berry’s character is much more urbane but is also a completely unapologetic dirtbag, but he is also a professional murderer…

Most of the sketches involve Fulcher and Berry as the hangmen, but they will also play random characters, such as this musical duo in the recording studio who keep meeting up with famous musicians (in this case, David Bowie):

If you like sketch comedy and are in the market for something you haven’t quite seen before, I highly recommend Snuff Box.  It is only 6 half-hour episodes, so even if you completely hate it, you won’t be that much closer to death upon finishing it.

I would say that out of all the Screensnark staffers, Rob is the most similar to me in terms of entertainment. We’re both huge comedy nerds. We’ve been discussing stand up and sketch comedy for the better part of a decade. So when he requested that I watch Snuff Box, I was a little intrigued. I’d never heard of it before, but Rob is into a sketch comedy show that I’m not? I got very curious. He likened it to Mr. Show With Bob and David, which…no. That isn’t a slight against Snuff Box, but a testament to how much I love Mr. Show.

The problem lies here. How does one exactly critique a sketch show? I guess in the spirit of Switch Hitter, I could just critique Rob’s taste, but I find it hard to say what works and doesn’t work in a genre as subjective as sketch comedy. It’s either funny to you or it isn’t. Or it’s whatever the fuck Tim and Eric Awesome Show Great Job! is. But I’ll try and critique it anyhow.

Snuff Box was kinda funny. No more, no less. They gave their jokes and premises no time to grow and that frustrated me as a viewer. That’s their style, but it doesn’t work for me. I’d be surprised to go back and find out if even one sketch cracked the two minute mark. And probably 7 times out of 10, I saw the punchline within five seconds of the setup. So I found it predictable, lazy comedy most of the time. But there were a few genuine laughs from me. There was a sketch with no dialogue that was probably my favorite. Just guys out on the street with huge signs with arrows that say GOLF SALE. and when they got a patron to follow the arrows, it led to a back alley where they just beat his ass with the signs. Another premise that I laughed at was the fashion trend of pre pissed in and pre shit in pants called Le Piss and Le Poo, respectively. Because I’m a 13 year old at heart.

So at the end of the day, I find this to be a pretty run of the mill sketch show. Not great, but not crummy. Sorry, Rob. We’ll get ‘em next time.

This week my pal, buddy, confidante, guy I know by first name Rob asked me to watch Snuff Box. He asked that I watched the entire series, and to be fair it’s only 6 episodes, but life happened and I could only get in the first episode. Not to say that I will never see the last 5 episodes, because from what I saw in the pilot episode, I liked quite a bit. Rob told us that since we were big Mr. Show fans, we would enjoy this. Having seen the first episode, I do understand the comparison. I don’t like it quite as much as Mr. Show, but I can see the similarities. Both done by a talented comedic duo. Whereas Mr. Show was anchored by David Cross and Bob Odenkirk being themselves, albeit somewhat sensationalized versions of themselves, Snuff Box seems to be anchored by comic actors Matt Berry and Rich Fulcher playing characters. A sophisticated executioner and his American assistant. Then random sketches happen in between visiting these characters.

I didn’t know these actors, I think I recognized Matt Berry from an episode of Portlandia and the American I didn’t know at all. In fact, I didn’t think the “American” character was American at all since he sounds like a British actor impersonating an American. But I looked it up and apparently the guy is actually American. Inception. I’d like to go into more depth but the boring fact is that I enjoyed it. To analyze why people enjoy this show would be to look inwards, and I don’t have the mental fortitude to do that at this point in my life. I probably will return to it now that most shows are on a break. No more Walking Dead, Boardwalk Empire, etc for a while. It’s a little weird in places, like alienating weird. That’s okay though, not all the sketches on Portlandia or even Mr. Show are gold either. Final impressions, it’s streaming on Netflix, put it in your queues, it’s a funny show.