Channel 4’s Derek, a Netflix exclusive.  Can Netflix really claim exclusivity to a show that already has a channel attached to it’s name?  Anyhow, Derek is a Ricky Gervais vehicle shot similarly to his original Office mockumentary style.  It takes place in a nursing home wherein Gervais plays the title character Derek, a simple minded, kind-hearted caretaker.  His always welcome to see man-pet Karl Pilkington plays the home’s maintenance man, and there’s a slew of supporting characters that you actually grow to care about over the course of the series.  Even the show pervert, Kevin.

Overall this is a series that I really enjoy.  It is heartfelt and genuinely funny.  My only real complaint is that sometimes it feels like it’s squeezing you for cheap emotions.  As the show is set in an old folks home, they’re able to kill off a character almost every episode.  Normally the viewer doesn’t have any real emotional attachment to said character, we just get bombarded by a crying Derek telling us what great people they were.  Having this possibly autistic character crying nearly episode and spouting cheesy lines about how kindness is the answer for everything naturally evokes some sort of feeling.  Perhaps my biggest issue is actually that these things are coming from Ricky Gervais, one of the most polarizing comedians on the planet.  He plays the saint on this show, then straightens out his face and rips mercilessly on old people, fat people, and most of all, religious people.  Anyone who follows Gervais on any social media can tell you that he probably makes at minimum 3 unnecessary jabs at the stupidity of religion and the people that believe in it. 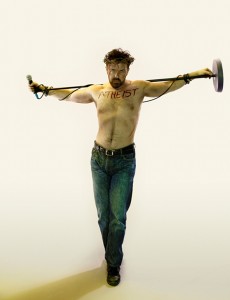 However, this should not take away from the experience of watching this program.  I still enjoy Tom Cruise action films, and that guy is bananas.  It actually can be very genuinely heartfelt, and getting further into the series you do start to know some of the characters dying off.  There’s a constant humor present throughout each episode, and the overall message of the show is pretty good too.  Be kind to people.  Altruism isn’t something that needs to be looked on with a sneer.  It’s pretty simple, people that do good things are good people.  It’s a point that’s pretty fantastically illustrated in this program, and I’m looking forward to series 2.  (Series 2 being season 2 in British.)  In the meantime I’d like to see if I can get my internet pals Joe and Shelly to understand that kindness is magic.

Derek is Ricky Gervais’s unexpectedly touching new single camera comedy vehicle, airing on some ridiculous Brit channel across the Atlantic, available on Netflix (and pirated download) in the states. Prior to this, I had never seen a minute of the show, but following Gervais on Twitter it gets difficult to ignore the near universal praise that the show seems to receive. In between Ricky’s endless and humorous tweet critiques of Christianity and his shilling of David Brent live shows, there are infinite comments about how tremendous Derek is.

First, after watching show after show clock in around 42-55 minutes (looking at you, Masters of Sex) it’s instantly refreshing to know that this episode is only around 24 minutes. All killer, no filler, right? It’s understandable that prestige dramas need to be longer, but there is an element to the short comedy episode that forces the point to be made quickly and effectively, or else all of the juggled balls fall out of the air.

The show is similar to The Office in that it is filmed mockumentary style, following the employees and inhabitants of a small retirement home occupied primarily by low income residents. There seems to be an inordinate amount of deranged or mentally troubled people in the building, but having only seen one ep, I can’t tell if that’s actually the case or if it’s just the intense British-ness showing through. The home is facing financial trouble and is likely facing closure, so it is up for review by some bureaucrats from a vague government agency. Gervais plays Derek, a possibly autistic pseudo-employee, and is accompanied by the kindhearted but no-shit-taking Hannah who runs the facility, and the ever aggressive Dougie, who has every skill except social skills.

The points here are made clear almost immediately. The first is that within any organization or grouping of people, if you peel back the layers of the onion, you’ll expose both examples of the elegance of human relationships and uncomfortable and unavoidable failures of everyday life. Anyone who ever has been through an audit of any type knows, the auditor is going to find shit. Nobody’s perfect, and rarely are people even close to perfect. But if people are going to expect perfection out of human beings, they’re not only going to be disappointed, but they’re also not close to understanding the point.

The second point is delightful in its simplicity. It’s okay to be nice. It’s all right to be kind. Altruism can exist. You don’t have to be an asshole. Sarcasm is fine sometimes, but other times, just try being genuinely pleasant. Is it the true meaning of life? Just be nice to people. Do nice things.

I do have to say that I have a little single-camera comedy fatigue, after multiple seasons of the British Office, the American Office, and Parks & Rec. It’s pretty obvious that this show wouldn’t work as a traditionally filmed multi-cam sitcom, but it would be nice if Gervais began exploring other techniques that haven’t been so prominent recently. Especially since he was so responsible in popularizing the single-cam mockumentary style in the first place.

But overall, this is a touching display of TV that brings with it emotionally elements that aren’t typically present in comedy. Yes, I accidentally watched Ep1 instead of the Pilot, in case there’s anyone left that hasn’t figured that out yet. But I’m very much looking forward to seeing the Pilot, and then finishing the first season.

Wow! I was pleasantly surprised when Cam picked “Derek” airing on Netflix for us to watch this week. Number one I must confess my secret crush on Ricky Gervais. I know he’s not your “typical” beefcake-y heart-throb, but I am hot for him. I love that I can only understand every third word he says and I love his whimsical and different outlook on life, and of course his humor. Having said that, I was over the moon happy to take on Derek.

Derek follows Gervais as this understated Health Care worker in the UK (obviously) in a nursing home. It looks as you’d expect it to look. I’ve had some experience now with the elderly and their care so I was happy to see this setting. Old people used to scare me but now I know they are people like you and I who have lived sometimes full and exotic lives. At some point your body and mind get tired but you’re still inside, if that makes sense.

Derek has a weird walk as if there might be a limp, and he has an under-bite that reminds me of my Shih tzus (whom I adore) and he is weird and odd and endearing. He has a friend in the facility: Dougie , who seems almost as equally odd and unintentionally funny He is the care taker of the facility and also Derek’s flat mate. And there is Hannah, a pretty woman who seems to be in charge of the facility. We get to know her background in an organic way. The interesting part of this show is that it’s like “the Office” (That Gervais created) in a Mockumentary style. There is a film crew there to capture their stories. Seems to make perfect sense. I mean if Honey Boo Boo has a show, why can’t these British nursing home workers?

The show is short, only 24 minutes but I feel you get super character development IMMEDIATELY. I feel I already know the three main characters. Derek clearly loves Hannah but isn’t creepy or stalker-ish in showing it. She thinks he is a great person, and Derek is. He loves these elderly patients. He gets to know them and their idiosyncrasies. It’s amazing to get to know people. I know I know, a lot of people say the world is doomed, but it’s not. People are what makes this life worth living, and I love learning about other people every day. Some are bad and some are good, and some of us are neither but just trying to figure it out.

Derek loves reality TV so he is thrilled with the film crew being there. i can’t relate because although I love TV and even the branch of some reality TV, I don’t ever want to be documented in any way, shape or form. I’m a weirdo private person and I would never think I was fascinating or good enough to be filmed. Derek himself comes off as almost autistic at times but annoying like Dianne Kruger’s character on “The Bridge”. Derek says he believes it’s more important in life to be kind instead of being clever and good looking. I think this should be put on every diaper in America. So many people are so caught up in how “smart” they think they are or how hot they think they are, when in fact they are making up lies for all that they lack. Derek is indeed actually kind so he needs to make up for nothing.

i will be watching the whole series and Thank you so much Cam for introducing it to me! The only thing it lacked at all is subtitles as they are Uber British like Harry Potter and I had to rewind a few times! Damn ‘Muricans