It was my turn to choose this installment of “Some Like It Watched”, so I pulled up a recent Nielsen Ratings list and decided to pick a highly rated show that I had never seen. Castle was #9 on this particular list. I wanted to get some witnesses and figure out what the big deal was about Castle.

This isn’t my first rodeo with Castle. I’ve spent a significant amount of time in the hospital over the past couple years and Castle reruns on TNT almost every day for hours. And at certain hours of the night, it was infomercials, Castle or The Nanny. If you’ve ever seen any show on the USA Network, you’ve seen Castle. palatable crime drama with a side of humor. Like Psych or White Collar or Monk, I’ll pop in from time to time, but it’s very far from appointment viewing. At the end of the day, nothing matters. They give you no real reason to become emotionally invested in these characters. They’re simply a set piece to get to the end of the crime in one single serving episode. The main characters aren’t ever going to die or anything.

And the episode Rob selected for me to watch couldn’t have been a more perfect cheeseball example of this. The main characters are Castle(a crime novelist, I think. It was hard to tell because everyone was wearing flak jackets that said POLICE and he had one that said fucking WRITER on it) and Beckett, his police officer/girlfriend. Early on in this episode, Beckett steps on a trigger to an explosive device and can’t move until they disarm it. See, on a series like Breaking Bad or The Shield or Homeland, I’d be riveted, because who knows what the fuck will happen. On Castle, we have Castle and Beckett joking around as we see flashbacks of their relationship. God dammit, Rob. A flashback episode? There’s nothing lazier than a flashback episode. And this show is already pretty fucking lazy.

And I’m going to spare you the flashbacks, because they did absolutely nothing to enhance the episode. Beckett’s standing on a fucking bomb for hours and you’re bickering about who liked who first and having this flippant, flirty discussion? uggh. About halfway through the episode, the explosives team discover there’s a timer on the bomb with about thirty minutes left on it, and only then do Castle and Beckett realize the gravity of their situation, because before that it was just jokes on jokes. But I bet you’ll never guess how it ends. Castle figures out the five digit code must be Billy based on some bullshit I don’t even remember and disarms the device with 1 second left! 1 second! That never happens. Seriously, can we ever find someone capable enough to disarm a bomb with like 14 minutes left on it?

A lot of us here at screensnark are pretentious douchebags, especially when it comes to procedural dramas. I admit, I’m one of the worst of the bunch. I fully understand the appeal of them, but they just aren’t for me. They’re massively popular, and I get it. Sometimes people just want to watch a self-contained hour of television without really worrying about any main characters dying unexpectedly. Normally a very straightforward storyline without any sort of brainpower needed to keep up. This ain’t Game of Thrones, this ain’t Breaking Bad. This is Castle.

I was a very big fan of the sitcom Two Guys, a Girl, and a Pizza Place, (later just Two Guys and a Girl) and remember being very impressed with one actor in particular. That was obviously Ryan Reynolds. He was absolutely hilarious, destined to become a star. There was another funny character though, the boyfriend. Played by Nathan Fillion. His role within the show was not as outright funny as Reynolds’ character, but his turn as a straight man showed some fantastic comedic timing. Sometimes being a straight man in a funny show can be a challenge in itself, knowing just when to look perplexed in a crazy situation a la Ben Wyatt. He didn’t gain true cult fame until he starred in the amazing series Firefly. When I saw that I couldn’t believe how much charisma Fillion oozed, rivaling Harrison Ford. The show was tragically cancelled early and we all wondered where Nathan would go. There was the Firefly movie, Serenity and then things were pretty quiet on his front. Castle is where he ended up, unfortunately. 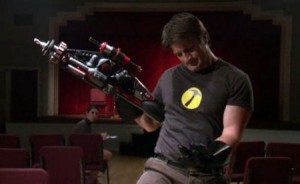 Unrelated image from a better project

The show isn’t any deeper than it’s premise, that being Fillion playing Richard Castle, a murder-mystery writer who gets to shadow detective Kate Beckett for book inspiration, even though she clearly disapproves. Why he’s allowed to do this ridiculous thing? I have no idea, I’d like to see the comedy of errors contained in the first episode that sets it up. The episode I actually saw was inconsequential. There was a murder, Castle uses unconventional methods to follow leads, detective Beckett uses good old fashioned detecting to follow others, and together they’re able to pool their resources and solve the murder. I imagine that could cover a large majority of the show’s plots. There’s the obvious will they/won’t they thing going on when you have one male lead and one female lead(I bet they will!!!). Formulaic as fuck, standard as shit, and as special as any one CSI spinoff. I figured this going in, and confirmed during viewing, the only reason this show works is due to the charisma of Nathan Fillion. If you’re a fan of Fillion, but procedurals are not your thing…..they still aren’t going to be. However if you’re a fan of procedurals, give Castle a shot. It’s a decent crime show and Fillion handles the lead with more charm than the Mark Harmons and David Carusos of the world.