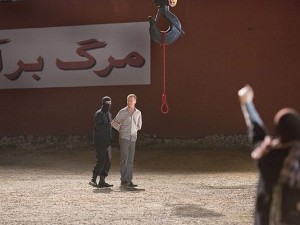 So, those of us who have stuck it out know by now that season 3 crashed and burned.  There was the laughably bad back and forth between Mrs. and Dana Brody, which only ended up serving as filler for the first 5 episodes.  There was the slightest glimpse of character development for Quinn and F. Murray Abraham, with threads of stories that ended up going nowhere.  And there was the Granddaddy of them all, Carrie doing nothing for an entire season besides being pregnant with Brody’s baby, and Brody spiraling into heroin addiction and eventually a merciful death at the end of an Iranian noose.

We realize we have a failed throwaway season.  It happens, even to above average shows.  The question that inevitably follows is, are we going anywhere?  Or, did episode 12 leave us with anything to look forward to?  Unfortunately, the answer seems to be a resounding no.  Carrie did her best (actually, was that her best?  Just trust Saul and the CIA, they’ll figure everything out?  The Carrie that I remember from previous seasons would have gone 100% off the grid with Brody as soon as they were together, leading him through the mountains into Afghanistan or Kurdish northern Iraq.  Instead she leads him to a questionable safehouse an hour out of Tehran and just waits to GET TO DA CHOPPAH?!?  Again, season 1 and season 2 went to great lengths to establish Carrie as an outsider skirting the edge of acceptable practice who went beyond mission parameters as soon as she could.  It seems like this season did everything it could to actively destroy all of that work.  So disappointing) to extract Brody from Iran after he went ahead with his contractually agreed to murder, but it wasn’t enough.

A further complaint: what ended up being Brody’s motivation to go through with the murder?  I understand why he would have failed to live up to his end of the bargain.  He finally arrived in a place that looked like it was prepared to show him some semblance of civility and respect, even if it was for executing a bombing that he probably didn’t have anything to do with.  Was it his love for Carrie?  Was it remembering how things ended with Dana?  I don’t think it was clear at all.  Perhaps the more interesting finale exists in a world in which Brody doesn’t murder Mr. Big Bad Guy, and Carrie is left holding the bag.  Also, shouldn’t we have expected off-her-meds Carrie to be a little more broken up about the death of the man she loved?  Drawing a memorial star in invisible ink is all the further she’s willing to go to mourn him?  Man they fucked up writing Carrie this season.

A final complaint that leads into the possible premise for next season.  I’m pretty sure we STILL don’t know who actually bombed CIA headquarters, and worse yet, no one involved in Saul’s super-op seems to care.  There’s an interesting way to tell that type of story, but again, the writers failed to tell it.  Have Saul be obsessed with pulling off the Brody mission, so much so that he’s unable to focus on anything else.  They didn’t do that, Saul was as lackadaisical as ever, to the point that he gave up on the mission several times and was resigned to his inevitable dismissal.  Or, show us that there are people within the CIA that are actively covering up who was responsible for the bombing, because they are connected.  They didn’t do that either, even though Quinn and F. Murray and Lockhart are all crying out to be involved in a story like that.

So, do we want this issue to be addressed in season 4?  Or do we want our hands, mouth, feet, face, etc. completely washed clean of this season and everything that preceded it?  Carrie is off to Istanbul to be station chief, abandoning her Brody-child quicker than if she was Peggy Olson in 1960.  I enjoy resolution and don’t usually like loose ends, especially after admiring the final 8 episodes of Breaking Bad, but I have to feel that there isn’t much left to be had from the major plot points from Homeland season 1-3.  I think I’d prefer a clean break, with Carrie waist deep in shit in Turkey chasing down a new threat and new scoundrel perps.

UNLESS they just want to pull out their dick and piss on everything, revealing that the Abu Nazir conspiracy reaches everywhere, and we are powerless to stop it.  One of the advantages that shows with 3 seasons of backstory usually have is that they don’t have to waste time with 3 episodes of introductions.  And Homeland can do that, if it has the balls to turn either Quinn, Abraham, Lockhart, or *gasp* Saul into the arch-nemesis in season 4.  It’s probably the better story if the creative team has the chops to pull it off, I just don’t see much evidence from this season showing me that they do.  That said, the 5 things I’d like to see next season: