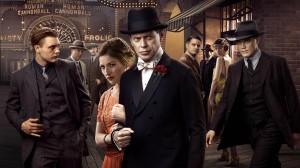 Boardwalk Empire, a show that was cool before it even started. Featuring the quirky, always liked Steve Buscemi in the lead, legendary filmmaker Martin Scorcese behind the scenes, and based in one of the most interesting time periods in American history. Prohibition, when alcohol was outlawed and criminals started to organize. With the fourth season having just wrapped up, it’s of this writer’s opinion that the show has never been so good as it was during it’s very first season. Our introduction to the show and the quick paced action within the first season remains some of the most compelling stuff we’ve seen yet. We started with two main characters, Enoch “Nucky” Thompson, played so ably by Mr. Buscemi, a corrupt city treasurer who immediately begins using prohibition to his advantage as he secures steady shipments of booze pocketing much more of the profit than he would have otherwise. We’re also introduced to James “Jimmy” Darmody, a young man come home from the first World War working for Nucky. Jimmy’s an interesting character, violent, effortlessly badass, and ambitious to a fault. Within the first episode he begins forging friendships with the likes of Al Capone to start some real gangster shit.

As far as we can tell, this is some of the first real organized gangster shit the world has seen up to that point. Nucky Thompson is also a badass, just a much more subtle, understated, wise sort of a badass. He doesn’t need to hit you in the face, but will give you an admonishing look that packs the same punch. The first episode, which was actually directed by Scorsese, is indicative of what viewers were to see for the first season. An extremely fun look into the time when underground kings were made. Throw into the mix a psychologically imbalanced prohibition agent, and a beautiful abused Irish wife that Nucky has his eye on and the table was set for one of the best seasons of not only Boardwalk Empire, but of any premium cable program.

I assumed that you would choose Season One or Two because you are such a Darmody fan (who isn’t?). And you are correct in that Season One was great. After two or three episodes, I was fully in. But you’re wrong regarding which season is the best. The answer to that is clearly Season 3.

Nucky is a great star of the series, but it is because he plays the Seinfeld role. He is even-keeled, logical and deliberate in his actions while everyone around him does crazy things. He is the straight man. Nucky doesn’t create mayhem, he actively combats mayhem because it is bad for business. Hell, he forgave Eli (after appropriate penance, natch) because that was the best business move he could make. He only took out Jimmy when Jimmy’s past mistakes and continuous battles made him disruptive to business.

So, if Nucky is the straight man, each season of Boardwalk Empire will only be as compelling as its villain. And Season 3 gave us an incomparable villain. Bobby Cannavale’s Gyp Rosetti was the perfect foil for Nucky. He was loud and brash where Nucky was quiet and understated. He was impulsive when Nucky was calculated. He didn’t believe that business wasn’t personal. “Everyone’s (in business) a person, though, right? So how else could they take it?” he famously replied when Nucky suggested that he not take business decisions personally.

I know, Cam, that you are a great fan of the show and can give me 100 great moments from Season 1, but Season 1 didn’t have Gyp Rosetti. And Gyp Rosetti played against Nucky better than any character on the show. Because Nucky was always Nucky, the make or break factor in every season was his nemesis. And you can’t find a better nemesis than Gyp. 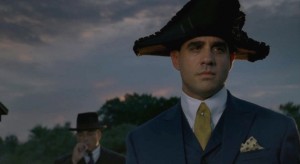 You got me, seasons 1 and 2 are absolutely my favorite seasons. You’re also right about those being in large part to Jimmy Darmody. You are ALSO somewhat right (when you’re right you’re right) about the best seasons being as good as their overarching nemesis to Nucky. Where I disagree with you, however, is the best nemesis. To me, the best “villain”, that being one who is diametrically opposed to Nucky, is the combined forces of season 2. Season 2 saw his protege Jimmy, team up with his former mentor, The Commodore. Throw in Nucky’s own brother betraying him and the fact that Nucky overcame all that he did in season 2, it’s pretty amazing. However, I’m not arguing for season 2, I’m arguing for season 1. This is why I said you’re somewhat right.

Because, as I demonstrated, even IF I fully agreed with you, I wouldn’t agree with your pick. Season 2 was the best for enemies, but season 1 had the second best enemy, prohibition agent Nelson Van Alden. We see him on the show NOW almost as comic relief. Just a big dumb fella bumbling from accident to another with an occasional outburst of insane rage. Season 1’s Van Alden is almost a different cat entirely. Van Alden started as a smart, meticulous detective type with some insane rage bubbling right underneath his skin. He believed he had the righteousness of the lord on his side, and was simultaneously dorky and scary as hell. Whereas Gyp Rosetti is completely driven by his temper, Van Alden’s only surfaced occasionally, making the tension for any of his scenes palpable. Also, another person who was sided against Nucky this season was Arnold Rothstein. Another real life derived character, and within the show, one smart cookie. With calculating intelligence rivaling Nucky, and gangster muscle Charles “Lucky” Luciano, Rothstein was opposed to Nucky from the first episode to the last. Not something to write off completely.

It’s not all about the bad guy, though. Season 1 is the best overall for story. Story is the most important thing, and in my opinion this show started out as a steamroller, but it’s running out of gas lately. That’s why it’s easy for me to rate the show from best seasons to worse, 1,2,3,4. 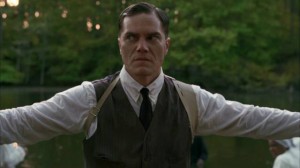 Your erudition is exceeded only by your irresistible charm, but that doesn’t make you less wrong.

I’ll disagree regarding Rosetti being driven only by temper. He’s driven by inferiority and always has something to prove. He acts fearlessly, but is always afraid of that he’s not being respected by the other gangsters. And he’s afraid that he’s not going to get what he feels he deserves, which is everything. Add to that the fact that he is charming when he wants to be and prone to shocking violence and you get a complex, wildly-interesting villain. And Cannavale can act, too. His portrayal of Rosetti is way-over-the-top, yet somehow still subtle. His Rosetti comes across like a Pacino character, but in a much more menacing package.

I’d be loathe to omit mentioning the havoc that Rosetti wreaks on Nucky. In Season 3, we see Nucky on the run and dodging bullets. He has to seek protection from Chalky White and Atlantic City’s black gangsters. Chalky’s decision to stand up to Rosetti and not give Nucky up is one of the finest moments of the series. And let’s not forget Al Capone showing up with the cavalry and telling Nucky and Chalky, “Let’s go sit down and figure out who dies.”

Admit it. You got wood.

As an aside, you raise a hell of a good point about Van Alden. Somehow, I forgot how great he was. It was incredible watching his stern focus and hyper-righteousness slowly corrupt until he had lost his identity entirely. Nobody (who is still alive) has lost more than him. His story arc was pure plot candy. And amongst us dudes, I probably make the trade of (literal) self-flagellation for the opportunity to tap Paz de la Huerta. Surrounded by a murderer’s row of great actors, Michael Shannon might turn in the second-most outstanding performance in the show.

We agree about Rothstein, as well. He might be my favorite secondary character on the show. Beyond the way that he shows up to gently move the plot along, I love the way he thinks and talks. I could probably watch a “Best of Rothstein subtly insulting people while trying to instruct them” DVD several times before getting bored. 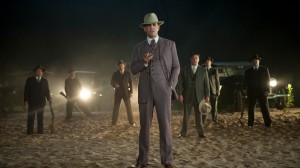 “Nobody here can take a joke.”

Let me just begin by saying that I am absolutely through and through a Rosetti fuckin’ fan. I believe Bobby Cannavale did an incredible job with the character. I feel like we’re splitting hairs, however, when I say that he’s driven by his temper and you say he’s driven by his inferiority complex. I feel like all of his insecurities just attribute to his over the top temper that goes off at the slightest provocation. He was scary, lighting cops on fire, beating people’s heads with shovels. One of my favorite lines from season 3 came from Gyp after Nucky’s advice about not taking things personally. At first Gyp seemed content, then later stewed on the words and came to the conclusion, “What the fuck is life if it’s not personal?” So good.

Having said that, there was simply too much in season 3 that DIDN’T click for me. Margaret’s subplot about opening a women’s clinic was boring as shit. Maybe it was revolutionary shit for the time, but it simply wasn’t entertaining. Christopher McDonald’s character of Harry Daugherty was given plenty of screen time for some reason to go over his corruption and investigation. Another real life occurrence that was just boring to watch. This was also the first season without Jimmy, and it was hurt by that. His replacement in Nucky’s organization, Owen, was shown to be a capable enough enforcer himself. However in season 3 for whatever reason he was castrated, and all the screen time he was given was devoted to him reminiscing fondly about Irish fields and shit with Margaret as they planned their escape. Then he was killed off screen! That’s unacceptable.

My main point is that while I liked Gyp Rosetti a lot, and I LIKED season 3, it just wasn’t enough to me to lift it up to the standards set by the first two seasons. It had it’s share of fuck yeah moments, but plenty of drudgery. My main reason for picking season 1 is simple. I was never bored watching it. 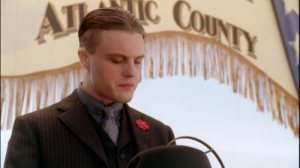 First things first: Shooter McGavin entering a situation is never a negative.  I don’t care if the situation is you and your lady having some sexy time on a bearskin rug by the fire.

Second, let us not forget that Season 3 gives us Nucky’s greatest move—convincing Masseria to walk away from Rosetti and cut Rosetti’s army down to a manageable size.  And then, then he has all of Masseria’s men wiped out on their way out of town to punish Masseria for sending his men after him in the first place.

I don’t put too much stock in awards, but it is worth noting that Cannavale won an Emmy for Season 3.  Boardwalk has won 17 Emmys, but Cannavale’s is the only acting Emmy (Buscemi & MacDonald have noms, but no wins).  It is no coincidence that Season 3 is the only season where one of the actors rose above an incredibly crowded field to win the prize.

In broader context, Season 3 of Boardwalk compares favorably with all but a couple Sopranos seasons– and you know Terence Winter will have the decency not to end the series with us holding our dicks yelling ‘What the fuck happened?’ (Choke on a cock, David Chase.)  There were no boring moments.  It was tense stem to stern.  And while I agree 100% that Seasons 1 & 2 were great, their greatness served as the foundation on which Season 3, Boardwalk’s finest, was built.

Until next time, Phil

Want to join the debate?  Enter your comments below.  Unless you agree with Cam.  Then you can go pee on yourself.