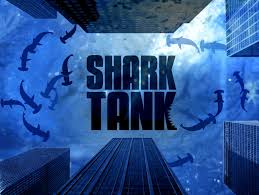 Ah, reality TV, that niche of the television industry most rife with pedestals and pitfalls.  For every Masterchef there’s a Bachelor, for every Amazing Race there’s a Long Island Medium, for every Big Brother 14 there’s a Big Brother 15.  Shark Tank, Mark Cuban’s foray into the medium, borrows much of the schlock from the awful side of reality TV, while remaining  grounded in actual reality.  The show features real entrepreneurs seeking real cash from real investors, which allows it to separate itself from other money-related shows like Storage Wars, which have had their behind the scenes shenanigans exposed.  The basic premise of each episode is that several potential investment opportunities are pitched to the Sharks, who are made up of five wealthy investors.  The Sharks then weigh the pros and cons of the opportunity, making offers or rejections along the way.  The show can be in turns boring and intriguing, and much of the excitement level depends directly on the type of person and product being evaluated.  Every episode I complain to my wife that we’re watching, and every episode I still find myself yelling at my TV.

So this weeks assignment was “Shark tank” on ABC. it’s not mind bending, but it is a neat show and I can yell at the TV and watch with the kids.

The basic concept is people come on in front of a panel of “experts” and pitch their ideas, concepts, businesses, or inventions. Sometimes the inventions are actually good. Most of the time, however, they are redonk useless and even a waste of money.

I missed almost the first half of this past week due to a Christmas parade. if you don’t have children, just buckle up for when you do. They take over your life even if you say “they won’t take over my life”. You have no say in it.

This week was a Christmas invention special. The fist pitch was a little thing called “the Hanukkah Tree Topper”. I’m not Jewish but I always wanted to be. Firstly I wanted 8 “crazy” nights of gifts. As a gluttonous catholic, I wanted more presents growing up, the church taught me well. Secondly, I thought being Jewish was so cool and exotic and then later in life I heard Jewish men can do you pretty well. I’m not sure if I’ve ever confirmed that but I’m going with that stereotype. Mazel. Anyway this dumb thing was for mixed families with Jewish and non-Jewish members decorating a tree and you could put this tree topper to gives snaps to being Jewish. I’m not sure about the rules and regulations of being Jewish and mixing religions, I’m not sure if it’s frowned upon. The idea seemed stupid to me. I mean can’t you have a menorah and a tree? Must you combine the tree with a Hanukkah topper?

The whole premise of the show is to get these experts (who seem really like D list investors) to give you money for your company and some percentage. I don’t do finance or numbers for a living and I don’t care. Their proposals sound absurd. They claim to be already making 150k but they need more money? I know enough about business to know these people are fibbing pussy farts out of their ass.

I think either they didn’t get any of the experts or only one? Anyway this idea isn’t taking off like an Ipod anytime soon.

The other product I remember was “Cashmere hair”. LOL, I was dying during this segment. This appeals to the fake bitches of the world trying to get luxurious hair with extensions. I think it’s great for an event or something or if you’re a Real Housewife, it’s mandatory. but Us Jane Shmoes of the world just use our regular hair and seem to have to get dick that way. The premise is these clip-in hair extensions from INDIA (ya know all the best hair comes from INDIA!) The shit was super expensive. Yes it was “probably” real hair, but there is no regulating body that can tell you it’s not horse hair. This shit reminds me of those chicken cutlet tits things. I always thought that was a sham. You know if you’re a guy and you’re at a bar and you see some chic you might want to dick, and she has really nice boobs. You get her home, you’re listening to Nine Inch Nails.. and “Closer” comes on and you pop out a chicken cutlet form her bra. IF I WERE A GUY…. I’d be pisssssssssed. Just use your real teets and your real hair. You can’t be all bait n switching on men ladies. They like you for who you are or they don’t. You can’t do a Dog and Pony Show when it comes to relationships.

There were other products, but those two were my favorites. All in all this episode the investors were not that successful, and none of the ideas blew me away. There is always next week!

Thanks Joe and you all have a great Holiday Jewish or not!

I watched this holiday-centric episode.  I think Mark is Jewish, right?  Anyway, Jewish girls are pretty good at sexing, but I’ve experienced a very small sample size.  Pitches were:

This episode was pretty representative of the show.  It’s not the greatest 45 minutes on TV, but if you spend your entire life watching high-intensity drama, you’ll burn out super fast.  Just forcing myself to calculate each entrepreneur’s company valuation in my head is a fun brain exercise, and worth the price of admission.