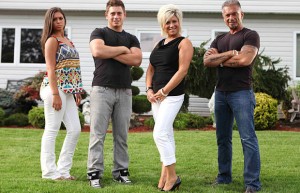 Let’s just say my pick of Long Island Medium as the Switch Hitter topic has been somewhat controversial around the screensnark water cooler (which I think needs a filter change, who is in charge of that?). Some have called foul. The idea of the Switch Hitter segment is to make others watch a show that you watch and let them explore something new. Do I think Long Island Medium is a good show? No. Do I watch it? Yes.

My maternal blood line is filled with generations of old school Italian gypsies and though very much a skeptic, the subject matter intrigues me. At best, the Long Island Medium helps people come to terms with great loss and at worst she exploits sadness and vulnerability. I watch to tear it apart, but deep down the Long Island boy in me is endeared by the familiarity of it all.

What say the guys?

I don’t think I had even heard of “Long Island Medium” before being tapped to watch the show. I checked my DVR and “luckily” there was a marathon running on TLC. The episode I chose turned out to be a road trip episode, where the medium traveled to Niagara Falls and performed some readings on the road.

I could not enjoy this show. In order to enjoy it, one would have to (a) like the star of the show and (b) believe in the power of the medium’s readings. Regarding (a), all I could think during this show was that my mom would be a reality star if she were still 40 years old. The Long Island Medium, Theresa Caputo, reminded me a lot of my mom, at least as far as obnoxious larger-than-life personality is concerned. The fashion senses are a bit different, as Caputo looks a lot like Hulk Hogan’s ex-wife, whereas my mom looked like Linda Richman. Caputo’s ridiculous hair, her huge fake nails, bad tan, constantly bewildered expression…no thank you. But I am not the target audience. I assume housewives are drawn to her pseudo-down-to-earth personality. I think it’s as fake as her skin color.

As for (b), I understand the appeal of mediums. Everyone wants to think that there’s an afterlife. Mediums can offer some solace to a person that’s lost a loved one by reinforcing the belief that they’re in a better place, or that they forgive you for a transgression, etc. However, I do not like the way that mediums perform their job. There was an excellent “Penn & Teller: Bullshit!” episode about mediums detailing the tricks they use to perform their reading. Some of these tricks were on display in this episode. It also occurred to me that you’re only seeing what the producers of the show want you to see. What about Caputo’s incorrect guesses?

This show also has a lot of filler, which I assume is the norm for these reality shows that follow a personality around. In between readings, Caputo and her husband are filmed at a chicken wing joint (because they’re in Buffalo) and are seen walking underneath Niagara Falls, with an annoying incident where the medium cut her poncho with her stupid nails.

I definitely will not ever watch this show again. It’s like it managed to combine a bunch of stuff that I don’t like into one giant shit-melange.

Her: What is that?
Me: Long Island Medium
Her: Why are you watching that?
Me: A friend told me I should check it out. It’s funny if you like to mock Long Island.
Her: You don’t ever get to make fun of anything I watch again.
Me: I know.

Not knowing where to find the show, I located an episode called “Unseen 2” on demand. Theresa, the Medium, starts the episode in Philadelphia and shows up at the doorstep of a couple named Laurie and Juan, who are very excited to see her. Apparently, Juan sent a note to the show telling them that Laurie was a devoted viewer who had unresolved questions and feelings stemming from her sister’s demise from a train accident twenty years prior.

Theresa walks in the door and is able to establish credibility very quickly by asking questions about numbers, letters and images which hold deep meaning to the person. She then relays messages from the dead sister to Laurie which ultimately provide great relief, specifically that the sister’s death was an accident and that her soul is at peace. Later in the episode, she hears from a spirit hanging around an archery range and then helps a mother cope with the loss of her young son by passing on reassurances from the dead son. What is striking is that beyond her appointments with clients, Theresa appears to hear from the dead everywhere she goes. And remarkably, she heals at every stop.

I see why Long Island Medium is successful. Beyond the fact that Theresa is charming (in an overly- honest, loud, big-haired sort of way), the show delivers six-minute cycles of redemption one after the other. You could do away with the symbolism and provide the same experience by filming ER nurses cleaning and closing wounds.

But this show hurts my soul. Theresa lays bare people in awful pain who are still grasping for answers and for meaning. What’s next? A show about starving African kids picking through shit looking for seeds? Ultimately, people appear better off from their encounter with Theresa, but this exchange is way too personal to be filmed and shared. I felt awful for each and every one of these people and that awful feeling lasted for hours.