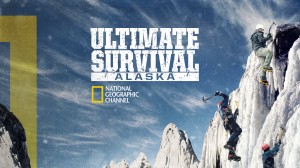 This week I might have been confused but I did a Switch Hitter and  not a SLIW. I’ve been in a Walter White Christmas induced fugue state, forgive me. I picked Ultimate Survivor Alaska on Nat Geo. I don’t know if there have been ultimate Survivors in Maine, Virginia, or Arizona..I assume not. But I love me some Alaska. I want to roll in the primordial snow naked and run from Polar Bears and sex it up in a real igloo. There are a bajillion shows about Alaska and I don’t care, I’ll be watching most of them.

The point of this one is for four teams to journey through an obstacle course of sorts, Alaska style. Now this is similar to the onslaught of new ” fake” reality TV shows. Or maybe I’m wiser now and realized shit is staged…Still I don’t care. I must share, I usually find myself attracted to a few men here or there on TV shows and sex them up in my mind. It’s not a big deal..I can’t openly finger bang in the living room with my family looking on now can I? i(I have boundaries!)  I’m also at that “age” not in my 20′s but not yet 40. I’m not sure if all women experience this but my thoughts of sex rival that of a high school boy (and my maturity level). I can also again wash the dishes or pay bills (not as dreamy) while watching this show.

The four teams are :The Military, and holy shit they are hot. The main guy seems very Matt Lauer metro douche-ish but the other two are rugged and not so annoying. The Endurance team has the youngest guy to win the Iditarod…ever, so that’s sexy and they have my favorite, a sexy Eskimo on the team. The Woodsmen: ha! The lady is amazing! She’s a tough ass broad who is a dead ringer for Dog the Bounty Hunter, and she has two guys who have to live in a log cabin.. I love them. Last team The Mountaineers: they are from Alaska and climb every vagina and crevice Alaska has to offer. They are skilled (sometimes dumb) and make my vagina a flutter (just a bit).

This show won’t make you smarter but it’s pretty good. Most men won’t have sex in my pretend igloo in my head but you might like the show regardless.

When I learned that I’d be watching Ultimate Survival Alaska on the National Geographic channel, I didn’t really know what to expect. I thought maybe it would be similar to Man Vs Wild, or Survivorman. I watch these sorts of shows occasionally when I’m not really paying attention to the tv and need some background noise. So I was surprised to discover that in fact it’s a reality competition show. Normally I’m not a big reality competition guy; I don’t watch Survivor, Amazing Race, Real World Road Rules Challenge, etc. However I do have to open my mind somewhat since I just this last season got hardcore into Big Brother. Though I was less interested in the competition aspects of Big Brother, and more the voyeuristic angle as a group of people are filmed 24/7. So I decided to give this a fair shot. I ended up watching the first episode and maybe about half of the second.

First off I have to mention I love the no-nonsense intro. Dudes on a plane are dropped off with maps and minimal gear and a destination and they’re off. There’s no 30 minute build up, no annoying host eating time, just dropping these poor fuckers into a foot of snow and watching them go. The four teams of three people are introduced as they come upon a dog sled camp. The first team is the “endurance” team, consisting of two world class athletes including a fucking dog sledding champion, and a live off the land real Alaskan. I favor this team immediately, since they just come to dog sleds and they have the youngest winner of the Iditarod ever. Second team is the “military” team, consisting of former special services military guys. They decide, fuck the sleds, let’s just run. I like this team, I hope they win. I still feel the endurance team has the best chance, but I’m rooting for the military guys. The next team are the “woodsmen” comprised of wood cutters and shit like that. Only team with one girl. I can’t imagine them doing well at all. Finally the last team is the “mountaineers”. A bunch of Alaskan mountain climbers. They could do all right, I guess.

So I guess each episode they’re dropped into a new location with the only goal to get from point A to point B in 72 hours time. The military guys come in first in the first episode, and the woodsmen almost don’t make it. The second episode I watch drops the crews into bear country. The woodsmen soon run into a secluded hermit who happens to have a boat that they can have. The fuck? They’re allowed to take shit like that? I guess it is a true survival show. I want to be the team who happens across a guy with an airplane. The episode is hyped up with the military guys running into bears. So I’m waiting for this bear encounter and when it happens it’s such bullshit that I have to turn it off. They happen upon a bear cave and they’re all freaked out, holding up their assault rifles. Then we see a second of a bear head peek up and the guys just freak the fuck out, blind firing a shotgun in the caves’ direction and take off running. Aaaaand, that was it. That was the biggest bear danger. The fuck happened, did they just wound an animal? Some bear that just wanted to know what the hell all that noise was? Dicks.

So overall it’s a pretty big meh for me. A 6/10 type deal, something I won’t seek out, but won’t dive for the remote to change if it’s on. Since there’s cameramen who always have multiple angles, I can’t fully invest in the “survival” aspect of Ultimate Survival Alaska. There’s entire crews out there munching on Taco Bell playing on their iPhones between takes. I also don’t know what they’re playing for. Along with the no frills introduction we also got no sense of what they’re competing for. Well, according to National Geographic’s website, “It’s an epic competition series where the only prize is survival.” What? Like, they’re not playing for anything? I don’t get it. A bunch of adrenaline junkies or something? So they don’t have THAT much motivation. Fuck it, go Military Team.