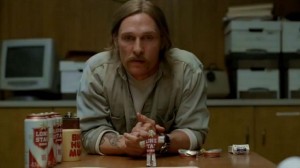 The television medium is not well known for its propensity for experimentation and risk taking.  The original formats for the sitcom and TV drama that were developed in the 50s can still be seen largely unchanged on all three major networks today.  That said, the rise of premium cable original programming from HBO, Showtime, Netflix, etc. and basic cable offshoots like FX and AMC has allowed for an expansion in creative freedom for TV creators and also new formatting options unheard of as recently as the 90s.  HBO’s True Detective is the logical extension of these two forces, and aims to take full advantage of both.

Having seen only the first episode, it’s obvious that HBO is treating the first season of True Detective like an 8 hour movie.  They’ve cast movie stars in Woody Harrelson and the suddenly white hot Matthew McConaughey, they hired a hotshot young filmmaker to direct in Cary Fukunaga, and the episodes seem like they will be presented in a long form style atypical of TV.  While other TV shows have borrowed extensively from film, this show is certainly the most prominent to fully embrace it in such a pronounced manner.

The show is centered around a stylistic serial killing set outside of New Orleans, featuring Woody and Matthew as rural detectives (what makes one a TRUE Detective?  Still not sure about that, but hope to find out).  Harrelson fits easily into the middle age cop who’s been around the block a few times with a family to think about, and McConaughey immediately makes it known that he is the eccentric loose cannon who has his own ideas of what it takes to catch a sociopath.

The approach shifts back and forth from a single-cam present day interview setup to a traditional multi-cam flashback setup.  The skies are gray, the music is dissonant and creepy, and the dialogue is murky and cerebral.  At first glance, this is basically Se7en with Woody playing a younger and whiter Morgan Freeman and Matty playing a mentally fucked Brad Pitt.  Oh, and McConaughey’s name is Rust.  Come the fuck on, no one’s name is Rust.

Actually, if Woody and McConaughey could inject some of the easy chemistry that exists between Detectives Somerset and Mills in Se7en, this would be a lot more watchable.  I was more than a little shocked that the worst parts of True Detective are the scenes that the two leads share together.  Their tension in those scenes in particular feels forced and doesn’t feel at all earned, and young McConaughey’s dialogue feels more calculated than an Aaron Sorkin Newsroom monologue.  And even that kind of shit can work if presented properly, but ten minutes in our first real glimpse into McConaughey’s character is him explaining to Woody (aka the Audience) that he is fucked up because the world is fucked up.  This isn’t a play, I don’t need a character to give voice to the inner workings of his psyche for me to understand that he’s off-balance.  Maybe I was expecting too much, but I wanted more than this.

There’s still loads of potential, especially since later in the episode it is revealed that the reason we are flashing back to 1995 is because there’s been a very similar ritiual killing in the present day, and Hurricane Rita wiped out most of the files on the older case.  The parts of this initial episode that work best by far are the interview segments with older Woody and Matthew, and as we move from flashback to the present, it would make sense that the two grizzled detectives would be reunited to take down the resurfaced killer.  That’s a story I’m interested in seeing play out.

We close the episode with a minor cliffhanger promising more peeling back of the 1995 serial killer onion next week.  As of now, this show is filling a void created by the polarization of Hollywood.  Specifically over the past two years, Hollywood has increasingly suffered from blockbuster-itis, shifting all films into either the categories of “summer/Christmas blockbuster” or indie arthouse pet-project.  There was a time when the film version of True Detective would have been greenlit featuring the same actors and director and would have made $150 million on a $60 million budget.  Now that there is no middle ground in Hollywood, we are either blessed or cursed with 6.5 additional hours of a project like True Detective.  Blessed, if it turns out great, cursed if it Breaks Bad.  And we got no allright allright allrights?!?!?  One week in, I’m not exactly sure which direction we’re headed, but I’ve certainly seen enough to be in for the duration.

7/10, except for the scene with Harrelson and McConaughey in the car at around 15 minutes, which gets a 2/10