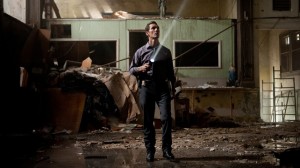 After digesting the fifth installment of True Detective, I finally felt the satisfied sense of contentment that I get after I’ve watched compelling TV.  I still feel that the first three episodes, with clunky ridiculous dialogue and tired late 30s white male detective with issues tropes, were a long, long way away from being even above average artistic television, while the tracking shot that closed the fourth episode was a fantastic and unsustainable high.  There’s just no way that the show could have maintained that level of intensity for four more consecutive episodes.

So the recipe for success for the fifth episode was a solid and steady segment of the story that made leaps in the plot, significant reveals to add to the depth of the main characters, and laid the groundwork for the last three ep stretch.  And…that’s exactly what we got.

We got another fantastically unorthodox action sequence that finally resolved the original set of 90s murders (or did they?).  I could have done without the slow motion machine gun masturbation shots, but overall the action scene closed one story but gave further explanation not only to what happened to Cohle and Marty, but also to their current set of circumstances.  We’ve (probably) found out why their investigation stopped when neither of them seemed to be truly satisfied with the outcome.  And this episode managed to accomplish all of this without completely removing the veil of mystery that has been present throughout.

So at this point, we think there is a larger conspiracy at work, but what kind of conspiracy jeopardizes itself by allowing very public ritual killings take place?  We think that Cohle is still just doing detective work, but has he crossed the line from incredibly dedicated detective to infatuated and obsessed copycat killer?  And it certainly seems that there’s a good chance that Cohle and Marty are still working the case together and have been in secret for over a decade, but neither are reliable narrators during their interviews, so it’s difficult for the audience to figure out which lies are cover ups and which are just outright lies.  And during all of this, there seems to be an undercurrent of occult nonsense that might be there just to make the audience dig up the whole back yard looking for clues.

I also love that the current day story line finally got jump started in this episode, with the hooded accusations being thrown at Cohle directly and through Marty.  It’s fun to find out the chronology of the interviews themselves, since I don’t believe it had been previously revealed that the Cohle interview took place before Marty’s.  I could still do without the verbose bullshit from Cohle, but now there’s a possibility (a ray of hope) that he’s using all of the metaphysical nonsense as a smokescreen to shield himself from anyone who might come sniffing in his direction.  And not only do they think that he’s behind the current string of killings, but they think he somehow managed to be the original murderer too!  I don’t think even superhuman Rustin F. Cohle could pull that shit off.

Finally, it was interesting that both of the interviews have been wrapped up at this point.  It effectively ends the possibility of having additional flashback segments, since the narration that justified them is over.  That means that the final three will be taking place in the present day.  Obviously that could mean anything, but I enjoyed a lot of the interviews themselves and I’m sad to see them go.  It also is starting to feel like MAYBE they should have done 10 episodes, but I’ll wait and see what happens.

I’m obviously glad that the show has turned in a positive and intriguing direction, but the unique quality of the format and presentation would have been enough to have me on board for future seasons.  Can’t wait to see where this goes.

Marty’s Division Bell Tour shirt? 6/10.  Would have figured him for a fan of Dark Side for sure, not a post-Roger Waters bandwagon guy.