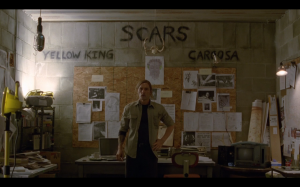 True Detective, an enigmatic creative roller coaster, from both a quality standpoint and a content standpoint.

Having had a day to digest episode 7 (I spent my Sunday night watching the Oscars and still haven’t seen the last 10 minutes of Dynamo Daryl Dixon’s Dirty Dance of Death) and had a glance around the Internet, I’d say that my opinion of this installment again differs with the popular stance.  The difference is this time, I enjoyed it and the masses were bored.  My problems with the first few episodes of the show have largely disappeared, as McConaughey’s Rust has given up speaking like he’s the resurrected and handcuffed corpse of Andy Warhol being buttfucked by Ellen Page’s Juno on peyote.  It also helps that Woody’s Marty has given up treating women like every other TV cop that has ever been a TV cop in the history of TV cops.  I haven’t been quiet about my disdain for that which has previously been done better by someone else, and this episode did a bang up job of sealing off the shtick.

I thought Ep 7 did a nice job of freeing up both characters to drive their stories to an endgame.  Marty was brought back to respectability and maybe came to an understanding that there’s no justification for continuously fucking over the most important people in your life.  I could have done without that part of the story entirely, but it was used as the source of the schism between Marty and Rust.  Yes, a little creativity would have gone a long way there, but it wrapped before the finale, which is better than leaving it open ended and giving some level of tacit approval to Marty’s reprehensible behavior (boys will be boys has always been and will always be bullshit).  We were also given clear indication that while Rust might not have been the classiest dude in the Klondike and the bayou over the past couple decades, he also (probably?) isn’t a copycat serial killer, and also (probably?) hasn’t been going vigilante on the Tuttle clan.

At this point, we’ve seen a little more than the tip of the conspiratorial iceberg, and playing “just the tip” is only fun for so long.  And since we’ve only got an hour left from this season, I only see a few options left.  It’s finale speculation time!

1. First option is, Marty and Rust lay waste to the Tuttles and both go out guns blazing.  It was super clear in Ep 7 that both had crossed a line that they were aware they may not be able to return to, so there is a level of commitment to closing the case with both of them that might result in death.  But it’s fairly clear that neither of them knows how deep the conspiracy goes, so it’s a little far fetched to think that they’re going to be able to shake the foundations of the Louisiana state government in an hour.  Odds of the Thelma and Louise ending: 20/1

2. Second option is, Marty and Rust close in on the Tuttles, but in a surprise ending, they take out some of the lower levels of the conspiracy, but some surprise Tuttle muscle takes them out and prevents them from brining down the whole Kevin Spacey.  Okay, Okay, the whole House of Cards.  We then fade to black with Scarred Tuttle giggling over the lifeless bodies of Marty and Rust, with pools of black blood forming and trickling into the swamp.  Odds of the Antagonists Winning: 20/1

3. Third option: The Cosmic Clusterfuck.  Personally, I love this one.  Rust has been warbling and rasping for weeks now about the circular nature of life, and how time doesn’t exist in one direction, and how everything that has happened has happened before and will happen again.  What if he’s right?  I’d love to see a psychedelic pastiche of the case taking place over billions of years.  Sometimes Rust and Marty bring down the Tuttles.  Sometimes Rust is the killer, sometimes Marty is the killer, sometimes Marty’s psycho daughter is the killer, sometimes Black Detectives #1 and #2 are co-conspirators.  Sometimes there is no killer and Rust goes insane.  The common theme is that there is no common theme, we’ve just seen the current incarnation of this series of events play out.  Last time it wasn’t like this, and next time it won’t be like this, and time is a fluid thing, motherfucker.  Odds of the Cosmic Clusterfuck:  There’s no fucking way they have the balls to do this.

4. Final Option: Since they won’t do number 3, I’d like them to give a semi-satisfying ending to the case that sees Marty and Rust catching Scarred Tuttle and bringing down the entire incest-ridden family.  But the episode runs over five minutes or so, and we get an extra scene in which it is very cautiously and sparsely revealed that the conspiracy reaches much farther than even Rustin Cohle suspected.  Marty and Rust make it through to be available for surprise cameos in future seasons, and then we have a thread of continuity that carries over to two new True Detectives next December.  Like the grand FBI/Greek conspiracy that The Wire teased but never really got around to digging into.  Odds of The Saga Continues: 10/1

What am I rooting for?  Obviously some unexpected and expertly filmed action sequences like we got in 4 and 5.  I’d like to see a cliffhanger that leads into season 2, putting a temporary bow on the Marty and Rust characters but leading us nicely into season 3.  And I’d LOVE to get a tease as to who the next two detectives are, but I think that might be hoping for a bit too much.  Regardless of the outcome, I’m extremely excited by the decades-old television industry walls that True Detective has cast down, and look forward to others following the blueprint.